The Capita Mega Merc is pretty expensive but it does offer a more dynamic lively feel without sacrificing dampness compared to the regular Mercury. 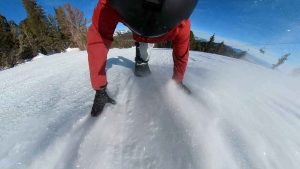 The Capita Mega Merc is pretty light. It didn’t feel like the lightest of the super light boads but it was definitely lighter than the Mercury. (We don’t put in the exact weight because with wood cores there is no consistency in a boards weight)

The 157 Mega Merc was good for my 185lbs but the 155 might be a little better for my size 9 boots. This isn’t a super fast turning board so if you want more response go to the next size down from what you would normally do.

For weight I would stay close to Capita’s recommended weight ranges. If it comes down to boot size or weight, I would make sure it fits your boot first and then your weight a close second.

The Twinish shape of the Capita Mega Merc has a very centered ride and it’s just a touch behind that true twin feel when on reference stance. The sidecut is somewhat directional but it feels closer to a twin than a directional board. You can weight your turns any way you would like.

The camber profile of the Capita Mega Merc is just like the regular Mercury with camber just past the bindings transitioning into a pretty pronounced rocker before the nose/tail. It is very forgiving but still tracks well one footing and flat basing. 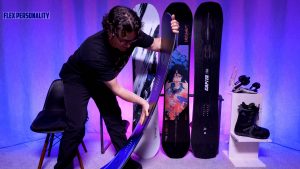 There is a very dynamic and lively flex with the Capita Mega Merc and on same day tests this just out popped the Mercury when it came to turning and ollie power. It was still pretty easy to butter as well. Now in comparison to the BSOD and especially the new Indoor Survival the Mega Merc didn’t have the pop they did. I think it might be because the BSOD has flat in the tail to hold on a turn and pop harder from the tail on an ollie. The Indoor Survival only has a little early rise before the tip/tail so it popped like a camber board. However both of these are less forgiving and floaty so it’s a trade off.

I didn’t get to really stress test the Capita Mega Merc in a lot of uneven snow but surprised me at how well it did compared to the boards I tested it against. It does really well for an ultralight and I didn’t really feel much of a difference vs. the Mercury in the conditions I rode.

The Capita Mega Merc has a sidecut that favors a straight line or two and it wasn’t very chattery when picking up speed. It isn’t a full on bomber but you can see it is designed for the straight lines necessary to get air.

The 1.5mm extension’s on each side of the waist (called Death Grip) seems to help with a little more grip and I felt comfortable in harder patches. It isn’t an ice specialist but it’s competent in harder snow. 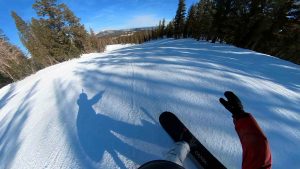 I’ve never found the Mercury or this Mega Merc to turn quickly. I always liked pairing it up with more responsive bindings to get it to turn faster.

The overall turning experience is a little more on the straight line side of turny but it is still pretty balanced. It doesn’t fight you on an across the groomer carve or a circle carve. Narrower down the line turns are very doable and where the Mega Merc shines is those straight lines into a kicker.

So the modest camber is felt when turning the Mega Merc. It is fun but it didn’t have the drive out of the turn like all the other boards I tested it against. It was a little better than the Mercury but both were a little behind the group. They all have a little more to a lot more spring out of the turn. The extra rocker before the nose/tail helps with riding centered on pow days. If you want to set it back and get a little extra directional float the Mega Merc is pretty good. That being said there are better boards when it comes to getting more set back on board. For example, the Mega Merc, with a 22.75” stance width, has a -1.625” set back from center of board. Many all mountain boards can get up to 2.25” or more and have a narrower stance width. It is still better than most centered stance twins though. 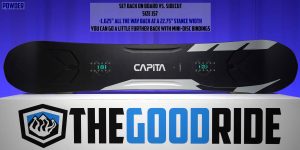 Very doable switch and it’s just a little behind a true twin. The Capita Mega Merc isn’t my ideal pipe board because I like something that turns a little faster. So if you want to get air this is a great board for that. If like to get air but don’t get that far up in the air (like me) this works fine. If you like to go big this works fine too.

So overall, the Capita Mega Merc is an expensive but much more lively version of the Mercury. Neither are super damp boards but the great thing is I didn’t feel like I sacrificed any dampness in comparison to the Mercury.

We try to get as many images of the Capita Mega Merc, but forgive us if they're not all there.