The Best Percussion Massagers For Snowboarders

The Best Percussion Massagers For Snowboarders 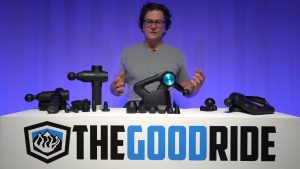 This is a Snowboarders Percussion Massager Comparison. They really help you ride more and we love them. I bought the Theragun Pro, Theragun Elite, Hypervolt 2 Pro & Hypervolt Plus to compare and review from a snowboarder’s perspective. This is all about how this works on your legs. I barely use these on my upper body.

Ethics Statement: We don’t get paid by the manufacturer to write these reviews and this is our unfiltered opinion. We do make money from the “Where To Buy” links, but this is our best attempt at an honest and objective review from an average snowboarder’s perspective.

I’m the editor at The Good Ride. I snowboard about 80-100+ days a season and surf a riverwave 60-80 days in the summer that is just as hard on your legs as snowboarding. Some days I do both. I also splitboard or Driftboard 15-40+ days a year depending on how much pow I get. I’ve been using percussion massagers most days for 3 years now. I’m not young but not old either. Best description would be to call me a 16-year-old..with arthritis. I wanted to get the best percussion massager possible so I can snowboard, splitboard and river surf more. You can see how many snowboards I ride and review here.

How They Were Tested

I owned the Hypervolt Plus for almost 2 years. Then I bought the other 3 recently and compared them for about 2 weeks in the spring. I would snowboard, splitboard, surf or do all three in a day. Then I would come home and test them all together. I would work each part of my leg with the same massager and with similar attachments. I would spend about 15-30 min a day.

Here is a quick summary of their strengths and weaknesses.

The Theragun Pro is my personal favorite. Of all the percussion massagers this by far has the best overall massage but it comes at a high cost.
Buy it at Moosejaw $499
Buy it at Dicks Sporting Goods $499
Buy it at Bobwards $599

The Theragun Elite stalls out the easiest and then shuts off. However, it’s the lightest, has the best feel in the hand and has a very good massage. It’s best for people who don’t need as deep of a massage.
Buy it at Moosejaw $349
Buy it at Dicks Sporting Goods $349
Buy it at Bobwards $399

The Hypervolt 2 Pro can stall out and doesn’t seem as powerful as its specs say. It does provide a softer less aggressive massage than the older Hypervolt Plus and has an easier feel in the hands.
Buy it at Backcountry $399

The Theragun Prime was also tested by Steph. Davey and I had 2 days on it when we were traveling with Steph. I wish Steph lived in the same town so we could have all tested these together. It would have been great to get a women’s perspective, but it was too hard to coordinate. I will occasionally reference this. If you want something a little more mellow than the Elite this isn’t a bad choice either. This is all Steph needs.
Buy it at Dicks Sporting Goods $249
Buy it at Bobwards $299

The Hypervolt Plus is the most aggressive of all the massagers and has the hardest attachments. This is good and bad. It can sometimes leave you sorer than when you started if you aren’t consistent with it or don’t ease into it.

Precious Good Ride dollars were spent to buy these Massagers and compare them.

The Theragun Pro has many different attachments in the box (expected for this price) but there are even more options from Theragun you can add. The Theragun Elite and Prime are almost there with the Pro attachment wise. I found that the duo adapter packed more of a punch with the Pro but did work with the Elite. Didn’t test with the prime.

The Theragun Pro is the heaviest but I still felt this was the most effective to use from hip to the bottom of my feet. There was always an angle that worked with the adjustable head. I wish it was a little lighter though.

The Theragun Elite came in a close second here. It doesn’t have an adjustable head but it sure is lighter and smaller. This almost evens it out.

The Hypervolt 2 Pro is not quite there with the Theragun Elite but it is a huge step forward from the Hypervolt Plus. It has a cool look to it though and my 7yr old boy wanted to use it as a space gun.

The Hypervolt Plus was by far the worst here and it takes some work to hold it.

The Hypervolt Puls used to be the quietest on the market when I bought it almost 2 years ago. Now it is the loudest in the comparison.

The Hypervolt 2 Pro seems to be the quietest but only by a little bit. Then the Theragun Elite and the Theragun Pro. All three of these are pretty quiet to the point where I wouldn’t let this affect your decision.

This is a super important category to me. My legs aren’t huge or anything, but they are thick and need a lot of pressure to give me an effective massage. Steph has strong legs but they are not thick so all she needs is the Theragun Prime. I think the Elite would work for her as well.

The Theragun Prime and Elite stalled out on me without much effort and I couldn’t get the relief I needed. What I really didn’t like about the Elite was how it shut off when it stalled out.

The Theragun Prime and Elite  also stutter more at off angles than the rest in this comparison. What I mean by stutter is they make a different sound and you don’t get the same effectiveness. The Prime and Elite loose their strength as the battery gets to about ½ capacity and then this gets worse. I’d rather have it be full strength throughout the whole charge and just let it run out sooner.

The Hypervolt 2 Pro stalled out in thicker areas of my legs but at least it didn’t shut off. It would stop and then slowly start back up again.  On paper, these specs make it seem like this should not stall, but in the real world, on my medium/thick thighs, it does. It didn’t stutter much either when you were at an off angle either. This had much less stutter than the Theragun Prime and Elite.

The Hypervolt Plus has a lower stall force rating on paper than the Hypervolt 2 Pro but it sure doesn’t in the real world. This thing will break you before you stall it out. When I first got this a few years back I was sorer than when I started. After about a week of using it, I got knots out of my quads I didn’t even know I had and my surfing/snowboarding got better as a result. It’s powerful and combined with the hard attachments it can pack a wollap. It also barely stutters on an off angle.

The Theragun Pro has almost the same stall force as the Hypervolt Plus but it does have more stutter on off angles. It seems to have a little more travel so that might be why. The softer heads mellow’s out the overall force of the massage which I personally like. I don’t feel like I’m going to break myself if I go to hard.

The Theragun Prime and Elite don’t have replaceable batteries. So when your battery wears out and doesn’t hold a charge you have to throw them away. Kinda sucks.

The Theragun Pro, Hypervolt Plus and Hypervolt 2 Pro all have replaceable batteries. The Theragun Pro is the easiest to replace and it also comes with 2 batteries. After 4 months of using this 4-7 days a week for 5-10 minutes per leg the battery isn’t holding a charge as long so its great to have a second one and also know I can order more. If I had the Theragun Elite or Prime I’d be half way through it’s lifespan. So even though I paid more initially I’ll save more over time with the Theragun Pro.

The Hypervolt Pro 2 and Hypervolt Plus don’t come with replaceable batteries but it is great to know you can replace them. The Hypervolt Plus had an excellent battery and after almost 2 years it still held a decent charge. It was probably at 65% of what it used to do new but I didn’t feel the need to replace it.

How They Actually Massage

The Theragun Pro was hands down the winner here. It by far gave the best massage in this comparison. It has a great balance between force in the motor and softness in the attachments/massage heads. I do wish it had one big and hard attachment so I could go a little harder in thicker areas. If they can figure out a way to reduce the stutter at off angles that would send it over the top.

The Theragun Elite and Prime had a great feel but just not enough force to get in deep areas.

I would have kept on keeping on with the Hypervolt Plus if it wasn’t for the Theragun Pro. This is a hard massage but after all the years of surgeries, injuries and PT I like it. Not everyone will feel like me though.

Now if all of these are too expensive for you then check out The Footprint Massage Fit Pro. It can’t compete with the massagers above but it’s massively less.