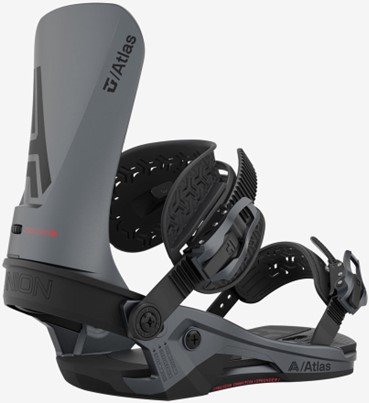 The Union Atlas got a stiffer high back with a little different shape. I liked the older high back better but this is still my binding of choice for personal riding and testing. 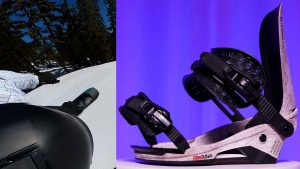 2.2 Lbs. Not super light but not super heavy either. Same weight as the Atlas Pro.

So this is the main change from the 2022 Atlas. There is a stiffer high back that is the same flex of the Atlas Pro. I personally liked the softer high back of the 2022 and below Atlas bindings as it had a very unique feel that made the response feel a touch more symmetrical. On top of that it had such an easy feel against the boots. I like the new shape which seems to be a combo of the old Atlas, Strata and Force. Just wish it was softer. 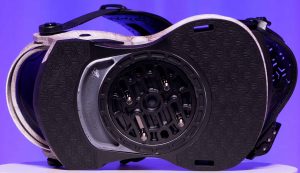 Same flex underfoot as before with a very damp rubber on the bottom. It does very well for a full sized disc because the rest of the binding has rubber underfoot in contact with the board. You can butter pretty well. The Force is a little bit easier with the softer EVA foam but both are close and they make the board feel stiffer underfoot but still not dead. In comparison to the Mini-Disc line like the Stratos the Union Atlas is not as buttery but more damp. 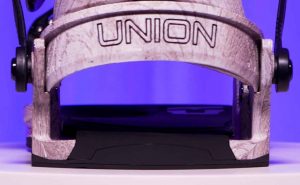 The more responsive you go up the line of Atlas for 2023 the less damp they feel. That is why I prefer this Union Atlas over the Pro and especially the FC. I do wish the rubber on the top was not as dense as the rubber on the bottom so it has a little more shock absorption like the Force and Falcor do. Even the Strata has softer heel padding. Love this support. Union has really dialed out their ankle and toe straps over the years. This is a great balance between support and freedom of movement. 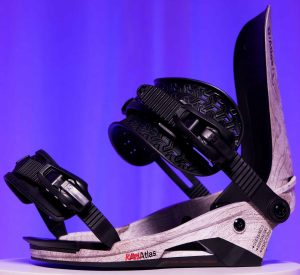 Not a fan of the thinner more flexy ladders in comparison to the older thicker ladders but this still ratchets on and off super smoothly. They are some of the best in the business.

Union really understands how important adjustability is. The Atlas has an adjustable heel loop and gas pedal. It is very easy to center your boot in the binding. Then you can turn your discs sideways and slide the binding tip to tail so you can get almost any stance width you want. Not many bindings can do this. The Forward lean adjuster doesn’t seem as reliable as the old forward lean adjuster but the rest of the binding is like most others with tooless adjustability.

So I’m a little more partial to the 2021-2022 high back but I might be a minority here. Despite liking the older highback, the Union Atlas is still an excellent binding and I didn’t notice to much difference ride wise in same day testing.

Create your own review
The Good Ride
Average rating:   7 reviews
Anonymous
by Anonymous on The Good Ride

My buddies and are had some freaky mind-melding going on and all three bought this same style binding. They are extremely comfortable under foot, but still have decent responsiveness. I prefer a stiffer high-back, so I liked the feeling this binding offered there. The "gas pedal" design to the front and back of the footbed made carving a joy--especially on the toe side.

I would be remiss in my review, however, if I didn't tell you about the serious problems not one, but all three of us had with the hardware. I have lost two screws mid-mountain and a third at the top of a black diamond (thank god it was a groomer). Both of my other buddies have lost the hand screw on the side of the heel strap and one of them lost the high back adjustment screw.

If you go with this binding, my suggestion to you is to double check all your screws before each ride and double check the hand screw on the ankle strap multiple times a day. I'll confess, we ride relatively hard and are throwing a lot of torque into our bindings, but if you're riding the same way, I might consider something else.


Anonymous
by Anonymous on The Good Ride

For 2014, they also changed the heelcup making it taper down providing less ding on the lower back part from previous years. Also, the heel part of the footbed is now filled in with foam providing a solid stable contact with the board where as prior it was floating.

binding is great overall. it feels like feather and gives great response in almost any condition for edge to edge turns. although my board is (capita BSOD) is a bit on the stiffer side, I tried them in park and I was able to use its max flex with these bindings which gives a great versatility for these bindings. Landings were quite soft and you feel really comfortable even when you ride at higher speeds.

HOWEVER; there are well known problems with Union toe straps and buckles which Union said they made big improvements in 2013. I have New Balance 1971 boots and toe straps comes off almost in every ride and I have to re-attach them every time I get to lift. I have tried many different ways of mounting it, even took it to local shop and it is what it is. as for the buckles; its been said they resolved jamming issue however I have issues 3 times out of 4 and I almost slap it with my hand to open it. I had a long chat with local distributor of Union and they said 2014 models will have no buckle issues so I m hoping to get new buckles for my bindings.

Apart from well known strap and buckle issues, its a great binding. I have to take a star out due to those issues.

ps: I also have Union contact, it doesnt have toe strap issue but buckle remains.


Anonymous
by Anonymous on The Good Ride

This might be the best binding I have ever tried, I must confess I didn't see what all the fuss was about with Union and thought it was just a bandwagon thing, but now I have tried them I am a big fan.

I waaaaay prefer the way these flex outside the foot as opposed to the burton reflex system which flexes at the disc.

Whilst riding with these I noticed the following improvements -

my board had better edge grip, it was easier to get more pop off jumps and bumps, they were noticably lighter (than my '12 cartel reflex) and overall it just gave me alot more control over my board, made it easier to turn and gave me better dampening.

All this whilst being softer than cartes.

I bet these are the shit in powder!

I would recommend these for all mountain and park but not for a beginner cos they have too much response but as soon as you know what you are doing I think you will like them.

Got these after reading thegoodride review. Love them. I had some cartels, which were ok but i couldn't quite see why everyone says they're a really great binding. I had size medium in the cartels so it's possible they were a fraction too big for my boot. Anyway, the small Atlas fits my boot really snug and the ride is improved substantially. The toe-strap ratchet thing I've read about is a complete non-issue. You must be a tard if you can't work them. I feel the ratchet to be very secure and they never once slipped on me while riding. This is what you want right? I use the toe strap right over the top of my boot rather than around the front of my toe. I found it locked my boots in place and the toe strap never moved around at all for me. As for riding response, I really like them. I put them on a Jones Mountain Twin and also on a channel system Custom X. Superb on the MT and I actually preferred the Atlas to my cartel est on the channel board! Felt just more solid. I'm a Union fan now and will be looking at some of their other options when the end of season sales come around. The Atlas is great for all mountain cruzing, groomer bombing and a few natural jumps. SOLID!

Pretty much the best value for money bindings, that Union makes and probably in general best out there! Of course it's always about personal preference and some might miss a canted footbed here (coming '13/'14 with the T. Rice "Factory" pro model!), but these are just all around great for the money you pay. I have last year's SL's and can't really notice a big difference stiffness wise. They are a tad heavier than last year's SL's, but this year will be pretty much the same, as there's no more machine coring on the SL's. So safe the extra money! The GoodRide guys are right on: it's crazy how a highback can feel so soft (torsionally!) but be so responsive! I'm an agressive rider and I really don't miss stiffness/support there. From big carves on groomers to big backcountry lines I feel safe in these bindings! Buttering and park works great, too, due to the big ankle strap and torsionally soft high back. They are very well padded and shock absorbant. The ankle strap will be hard to improve - most comfortable they've made so far! Even when you crank them down, you don't really feel pressure points or get this "locked in" feeling, while actually being totally locked in! With some Burton ankle straps (Cartel) I feel a delay when I lay into a frontside carve, while with the Union's my edge is right there, no delay, full control! I'm riding Jones boards (Flagship/Hovercraft) and those binders bend them pretty much effortlessly. Also cool is the rather big/long baseplate. I'm riding the larges with US 10.5 Salomon Malamute boots (no reduced foot print) and the toe ramp / heel cushion gives me plenty of support, where I need it, while with some bindings out there the middle of my heel is almost "in the air" - mostly due to a non adjustable heel cup... (With Burton I need larges and scoot them all the way towards the toe edge to be really centered over the board, while my heel is fairly unsupprted / "in the air"! With no adjustable heelcup, in my opinion manufacturers actually would have to build 4 sizes of bindings to get it all set up properly...).

Well, who hasn't tried Unions yet: they are up there! Give it a go!

Im not a fan of these like I thought I would be. I dont know if its just personal preference/riding style but I dont like the high backs! They have decent fit and finish but the adjustability is not that great. I dont like the footbeds that much either. I prefer FLUX or Burtons over the Atlas line for All Mountain options, but I should give the Contact Pros a shot maybe...

We try to get as many images of the , but forgive us if they're not all there.