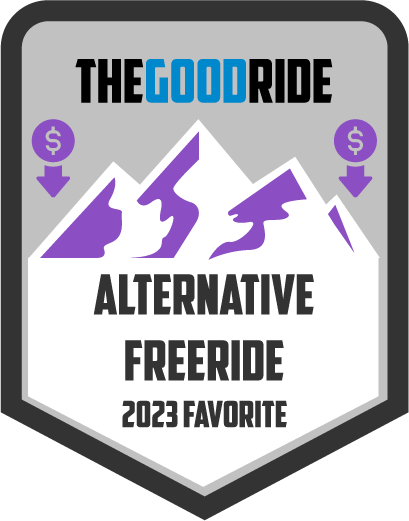 The Salomon Dancehaul offers up a really easy riding, soft, playful and poppy shortish/wideish ride that still doesn’t get too bucky in uneven snow. 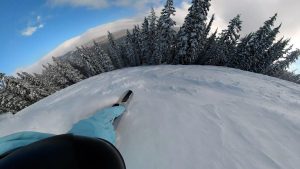 On some days I compared it to the Lib Tech Orca, YES Hybrid and Gnu Gremlin with the same boots and bindings on.

The Salomon Dancehaul is on the light side of normal. (We don’t put in the exact weight because with wood cores there is no consistency in a boards weight)

I was a little heavy for the 152 Salomon Dancehaul but not too much that it was a deal breaker. It worked really well with my size 9 boots too.

Here are some ideal US boot sizes for these boards. You can of course go bigger or smaller but these work best for not turning the board slower than it should be and not having the dreaded Toe & Heel Drag.
152: 9-10
157: 10-11

The Salomon Dancehaul has a pretty tapered directional shape but with a centered stance on sidecut so it feels pretty centered when on reference stance despite that bigger nose and tail. It needs a little more back footed weight than a twin but not by too much.

Salomon calls the camber profile Rock Out Camber which is mostly camber with only a touch of early rise. However when you strap in the weight lifts the tip/tail and it doesn’t feel like a mostly camber ride. It borders on being stable and somewhat forgiving instead of being super locked in.

The medium flex really gives the Salomon Dancehaul a buttery and playful ride with easily accessible pop for average riders like me. I loved how easy it was to ollie and how well it springs out of a turn. On top of that the way this performs in all conditions is much better than many salomon boards that don’t have ABS sidewalls like the Sick Stick and others out there in the line. It is a great all conditions ride from micro bumpy hard snow to soft messy snow. Don’t get me wrong, it can’t hammer through it all at high speeds and it does buck and bounce you around but it just doesn’t get cranky and send the chatter up into your joints like the old sick stick 151 used to.

The Salomon Dancehaul base glide is good when well waxed. Not exceptional but definitely good. I like the structure in the base too. It makes it good in wet spring snow as well. The Dancehaul isn’t a bomber though but it can handle short straight lines no problem.

There is very competent edge hold happening here with the Salomon Dancehaul. It doesn’t have a disrupted sidecut but it held well enough in hard snow for my taste.

What I love about the Salomon Dancehaul is how the board initiates a turn pretty easy for its width but when you get this sidecut engaged it has a balanced turning experience that leans more on the turny side of things. Across the groomer carves and quick hard carving turns were super springy. If you like a stiffer board for a carve you won’t be super stoked but I really enjoyed how easy it was to make it happen.

Set all the way back at a 21.75” stance width (same as reference) you can get 4” back from center of board. Add in the 12mm of taper, a big nose and small tail surface area wise you have very easy directional float. In knee high powder the Salomon Dancehaul stayed on top of the snow well and I could tell it could handle a lot more snow before it was challenged.

Very doable switch for how tapered and directional the Salomon Dancehaul is. I think this is a pretty fun park ride too.

Overall, I really like the construction and all around feel of the Salomon Dancehaul soo much that I’m glad I bought it. It won’t be going anywhere and it is a very recommendable ride for a quiver or as a daily driver. For 2023 there are some slight tweaks to the core profile but it is still very much the same ride.

We try to get as many images of the Salomon Dancehaul, but forgive us if they're not all there.

It's as if Salomon assembled all their engineers and asked them to design a board specifically for me. For that, I will always be grateful to Salomon and forgive them the monstrosities that they used to make 10 or 15 years ago.
This is simply the best carver I have ever ridden, and I qualify this by saying that it allows most riders to reach their optimal carving capability, more easily than other hardcore Freeride boards.
Simply, it is very accessible by the majority who will ride this board (if you know how to carve).
Or more eloquently put, "It democratises carving for the masses".

It makes for any kind of turn that you like; short quick, or long and arched. Although short-quick turns are not its forte due to its shifted volume.

The base has some structure and is fast enough (Not the fastest but perfect for the board) if you wax it often.

The nose is wide and very buttery, and tail is stiff, but still butter-able.

The only point I take issue with TheGoodRide review is the Uneven Terrain category, which they have marked as "Great".
It is far from Great when the going gets choppy. The softer flex and absence of dampening tech, makes it very uncomfortable on chopped up end of day snow, and very jarring on icy patches.
For that reason I would hesitate to call this a FreeRide board, although it does have many FreeRide characteristics.

But on a good snow day, on a Blue run, with some powder on the edges of the slope, you cannot get better (all things considered).

product 0.3
5.0 5.0 1 1 It's as if Salomon assembled all their engineers and asked them to design a board specifically for me. For that, I will always be grateful to Salomon and forgive them the monstrosi Salomon Dancehaul 2022 Snowboard Review