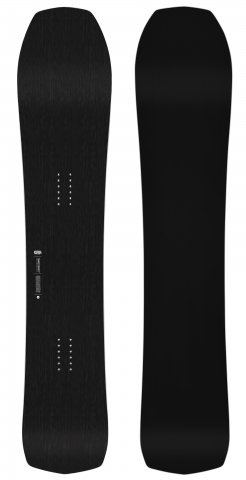 Approximate Weight: The Korua Tranny Finder Plus is a really light board.  What they are doing tech wise here really does lighten up the board. It really is a night and day difference when compared to the Tranny Finder.

Sizing: Just like the Tranny Finder it fits a lot more boot sizes than you would expect for its specs.  You would think it works with Grant’s size 11’s but you wouldn’t think it would work just as well with Peter’s size 8.5 and my size 9’s. Same goes for almost all of the Korua boards we tried.  It doesn’t handle the heavier guy as well but that’s expected with an ultralight board like this.

On Snow Feel: The Korua Tranny Finder Plus has that same camber profile and shape as the Tranny Finder so it has that same advanced to expert rider style going for it.  However, it’s ultralight personality just makes it feel different underfoot. It favors a more directional stance that has a positive angle for the back foot (like 27 front +6 back) but it also can deal with a slightly negative stance angle in the back like (18 front -3 back) or something like that. Some Korua boards like the Pencil and Dart, in our opinion, seem to ride better with a positive stance angle on the back foot and a more directional angle on the front but this can work both ways. It leans a little more on the side of a more common freeride board that you see with most companies out there but still has a massive taper and a more slashy/surfy/on the back foot kind of ride to it that lives on the alternative freeride side of things.

Skidded Turns:  Not super easy to skid a turn with and the camber from the tail to a bit past the front binding makes it semi-catchy/semi-locked in.

Edge Hold: Pretty strong edge hold similar to what we found in the Korua line but we felt the Tranny Finder held a little better edge as the terrain became more uneven.

Turn Initiation: Much faster than you would think for a board of this type. Peter and I were turning this pretty quick and you wouldn’t think that if you looked at the waist width and tip width.  However, it must be the massive taper and sidecut that makes it turn as quick as it does for our 8.5 and 9 boots. Its lighter weight feels like it’s a little tiny bit faster than the Korua Tranny Finder but they are pretty close.

Turning Experience/Carving: All Korua boards, including the Korua Tranny Finder Plus, are all about making fun turns and carves.  This is no exception.  There is a good spring out of the turn and it’s a lot of fun.

Powder: We had a good amount of time on this in some deep powder.  Here is our long post powder discussion over some libations and a bit of Shepards Pie.

To elaborate a little more the Korua Tranny Finder Plus has a lot of setback on board in comparison to the setback on sidecut. There is a 10.5-inch difference between nose/tail making it 5.25 inches back from the center of the board when setting it all the way back at a 22″ stance width. Take the almost 3cm of taper, the big nose and the early rise before it you have a great board for powder float. It’s not quite as good as the Stealth, Dart, Pencil and others like it with more set back on board but it’s the best for those that want more tail for air and still floats like a champ. If you see a ton of deep powder maybe the Pencil Plus will be the better call but this can for sure stay afloat in the deepest of deep.

Speed: If you want speed and powerful turns at higher speeds or you like to hit pretty big kickers we all would prefer the Tranny Finder over the Tranny Finder Plus.  However, the base is faster and has better glide through long flat runs and we found it kept its speed better.  It was really apparent to us in deeper in powder and this could get us a little further out of a flat area than the Tranny Finder.  That could mean the difference between walking out or riding out.

Uneven Terrain: For most of us, this was the deal breaker in comparison to the regular Tranny Finder.  It’s a common problem with all ultralight boards, and that’s the extra chatter you get from reducing the weight.  It’s not ideal for those that see a lot of uneven snow.

Switch: Doable for those that want to ride or land switch on occasion and it offers up a better fakie ride than almost every Korua board except for the Otto.

Pipe: Very doable and a fun board for mostly directional pipe riding. Really drives well from wall to wall.

So, all in all, the Korua Tranny Finder Plus offers up a fast base, super light ride, and all around good time for those that like that very tapered directional feel but still want some tail for air.  If you don’t ride in uneven terrain this could for sure work but if you do, you might like the Tranny Finder better.

We try to get as many images of the Korua Tranny Finder Plus, but forgive us if they're not all there.