The Jones Ultra Mind Expander has the shape of the Mind Expander but with a hybrid camber profile, stiffer flex and less mellow all around ride. 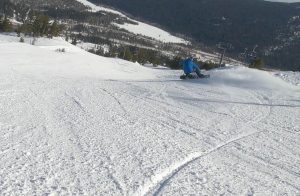 You want to size down from your normal Freeride snowboard size. Peter and I both like the 161 Flagship size a lot so sizing down to the 154 felt good for me but a touch too small. The 158 felt a bit too big for me but not for Peter. If they had a 156 It think that would be my perfect size.

The Jones Ultra Mind Expander has a pretty directional shape with a good amount of taper. It has a lot of nose and not much tail. On top of that the stance sits pretty far back on board so it likes more back foot weight.

The camber profile on the Jones Ultra Mind Expander is very much like the Flagship/Ultra Flagship with a mellow camber a little past the bindings that transitions into rocker in the nose/tail. When the rocker starts so does the spoon tech (lifted sides). It has a great feel in soft snow to powder but doesn’t make the board feel edgeless in harder snow. It is very stable one footing or flat basing but it does like a lot of back foot weight. Especially if your back foot is slightly duck or duck. If you ride on a positive angle with your back foot it minimizes the washy feel and you don’t need as much weight on groomers.

Pretty medium stiff flex that took a little effort on my part to butter. Legs felt great on the days I rode it this year but it took some work. There is pop with the Jones Ultra Mind Expander but it doesn’t spring like Ultra Flagship. I guess that extra $300 in the price did something for the pop. It is more fun to get air with the Ultra Mind Expander than the Mind Expander because you have some camber near the tail for landings.

In some ways the Jones Ultra Mind Expander is better than the regular Mind Expander and in others it isn’t. The stiffer flex makes it easier to power through turns in softer snow and it really feels damp in good conditions. You can go harder w However it has this cranky nature in medium to hard uneven snow that can be fatiguing compared to the regular mind expander. In some conditions it can be an all day ride but in others it might be time to call it a day when conditions change.

The Jones Ultra Mind Expander has a mellower disruption than the Flagships and many other Jones boards but it is still there. Its a bit behind them in harder snow but it still holds a little better than a traditional side cut. Doesn’t grab at all in softer snow.

Pretty fast in both sizes and it gets there when you need it without being twitchy or hookey. Great for riding in tight spots.

Once you get the sidecut of the The Jones Ultra Mind Expander committed it doesn’t quite accelerate as fast as when you initiate the turn but it still has a pretty fun acceleration. If you like something that turns a tighter radius on edge than the Flagship or Ultra Flagship then this could work. The new carve pack inserts have 1 extra set so you can get a little narrower stance. This allows you to get more centered on the camber and get a little more spring out of the turn than the former models.

The float of the The Jones Ultra Mind Expander is pretty exceptional…until you compare it to the regular Mind Expander. All that crazy surf rocker on the regular mind expander makes it effortless in powder. Still you have a lot of good things going for it. There is – 3” back with the 23.6“ reference stance and -5.125” all the way back from center of board with a 22.8” stance width. We hoped that with the extra inserts you could set the front foot back a little further but the way the 7×2 inserts were re-positioned on each foot there isn’t any more set back on board. So that set back on board, a big floaty nose, a fast base and a small tapered tail make for a pretty floaty ride for most deep days.

Overall the Jones Ultra Mind Expander isn’t the best board for all day riding but gives you a really turny/surfy ride that can carve way harder than the regular mind expander.

The Jones Ultra Mind Expander takes the same shape of the Mind Expander that we love in powder, stiffens it up a good bit and adds some camber.  The camber was a welcome addition to the ride on groomers but the super rockered Mind Expander is still the board we want when it’s super deep.

Nothing changed from the 2019 to the 2020 Jones Ultra Mind Expander. It was a limited release in 2019 and the only difference for 2020 is it is now a full release in the Jones line.

Flex/Buttering:  We were almost unable to butter this the Jones Ultra Mind Expander. This might be the demo model we received but the flex is super stiff. Often what we get in demo changes in production.  In my opinion, I think it’s too stiff to the point of being dead, and I liked the flex of the regular Mind Expander better. Still, a lot of the crew liked it this stiffer ultra damp flex. I would have loved to see the more lively personality of the regular mind expander just have camber and maybe some extra carbon fiber. Something about this ride feels a little dead. It might be the Ash top sheet but it could be something else.

Sizing:  The 154 feels a little too small.  Like with the regular Mind Expander the 158 might feel a touch big but better overall and that would be the size I would like to own.

On Snow Feel: It has that same Jones Hybrid Camber feel that is stable between the feet but at the same time forgiving.  Like almost every Jones board, it’s super easy to skid your turns as well as one foot and flat base.

Edge Hold: Really good grip that doesn’t grab too much in softer snow.  Seems to be slightly more mellow than the Mind Expanders sidecut in terms of bumps/disruption but it’s pretty similar overall in terms of grip on snow.

Turn Initiation:  The Jones Ultra Mind Expander is very fast edge to edge and very similar to the standard Mind Expander when it comes to

Turning Experience: When it’s groomer time the Jones Ultra Mind Expander shines over the Mind Expander here for sure.  Having some camber between the feet really makes this board much more fun to turn.  Making turns on the Mind Expander is way more fun than you would think for a board with that little flat and that much rocker but the Ultra Mind Expander gives you a mellow camber feel that springs out of turns much better.  It’s not going to compete though with boards that have a lot more camber but you get some nice trade-off in terms of float/forgiveness with this in comparison to those bucky camber boards. Overall it’s very fun to turn and has a quick surfy turning experience and if you surf it’s like a good tri-fin thruster in head high surf.

Carving: It’s not a super carver but the Ultra Mind Expander jams over the Mind Expander when it comes to laying out a carve.  It’s very satisfying and you can lay it over as hard as you would like.

Skidded Turns:  That rocker along with the lifted sides in the tip/tail make for very easy skidded turns that really help you recover if you get off your game.  It’s worth it to have less camber than some boards when it comes to that.

Speed: The 154 was small but it can bomb well for its size.  It’s stiff and damp and it also has a truly amazing base for this price point and one of the fastest we have ridden.  Jones always pays a lot of attention to their bases and this just has a glide to it so it’s much easier to get out of a long flat zone in powder or get through a long cat track back to a chair.  Still, it’s not quite the bomber that boards like the Flagship and Carbon Flagship are.  It might be the extra taper or that it’s further back on the tail but it just doesn’t feel like the first Jones board I would choose if I wanted to just mach down groomers.

Uneven Terrain: In hard snow, with micro bumps, the Jones Ultra Mind Expander is going to reverberate that chatter into your bones and make it an unpleasant day.  However, if you want to weave in and out of bumps the Jones Ultra Mind Expander does it really well.  Powering over some chopped up powder works well.  It’s just that hard bumpy snow you can get from a poorly groomed run on a hard day is what this is missing.

Powder:  So this review is Peter and I mainly talk about how the Jones Ultra Mind Expander rides in powder and comparing it to other Jones boards……after many drinks.  We had it in some deep powder to some wet powder and felt that overall it’s on the upper tier of floaty boards.  That being said, the Jones Mind Expander, with all that rocker, is on another level.  Get that board if you want something for powder.  Get this board if you plan to ride groomers more and want a little of everything. Still, it has the same set back on board that is pretty far towards the tail and at a 21.25″ stance width all the way back on the inserts you can get a difference between nose and tail of 10.25″ back making it 5.125″ back on board which is super far back.

Jumps: So it was hard to get this board to spring on an ollie due to the super stiff flex.  It felt dead when you tried to pop it into the air.  It popped out of a turn well enough up but just didn’t feel that lively when you tried to ollie.  I think we all would prefer getting air on the Flagship over this.

Pipe: Yeah if you want to ride the pipe like a wave this would be fun.

So overall I think we all had a great time on the Jones Ultra Mind Expander.  If the production model is going to be softer/more lively underfoot than the demo we tried that might put it over the top but as it stands now it’s a more surfy alternative to the Jones Flagship and a recommendable directional/surfy daily driver.

We try to get as many images of the Jones Ultra Mind Expander, but forgive us if they're not all there.