Turn Offs:Chatters and bucks in everything but really good snow. Only good for lighter riders.

The Jones Stratos is a light poppy super fun to turn ride. If you can get past how it doesn’t ride well in uneven snow and it’s wide stance using the setback inserts you could have a very versatile ride. 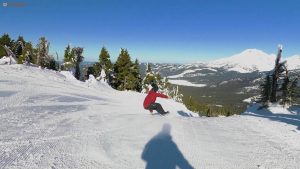 How This Review Happened:   We spent our precious Good Ride dollars to buy this and review it.
Size: 159
Days: 10+
Conditions: Some early morning slackountry time with Drift Boards before the lifts in about 4-6 inches of somewhat thick PNW powder at Mt. Bachelor. Then some resort riding in all types of conditions over 10+ days ranging from perfect corduroy to messy hard end of the day snow.
Riders: James (Size 9, 5’10” 185-190lbs), Peter (Size 8, 5’11” 185lbs), Jimbo (Size 11, 5’11” 160lbs), Zobel (Size 11.5, 6’ 180lbs), Nick (Size 10, 160lbs, 5’8”), (unfortunately we didn’t get the rest in on the review but they shared the same opinions)
Boots: Adidas Tactical ADV
Insoles: Sandsole Custom Insoles,  Footprint Insole Technology Gameghangers Low Profile
Bindings: Union Atlas

The 159 matched up really well for my specs that you can see above.

The camber between the feet isn’t enough to be catchy/locked in. The Jones Stratos tracks well and feels stable and I didn’t feel the lifted edges wash on me in any condition we rode it in and neither did our crew. It might be because the sides start to lift up when the rocker rises up.  It’s very predictable, stable and skids turns really easy. It feels the same underfoot in almost every condition except uneven snow.

The Jones Stratos has a stiffer flex between the feet but it gets a bit softer in the tip/tail. It was very doable for buttering. There is also a lot of snap on an ollie and this has a lively flex to it. It’s one of the poppier Jones boards we have tried and has that Aviator style pop to it.

This base has exceptional glide and it’s one of the best bases we tried at this price point. It helps you traverse faster and get back to the chair on those precious powder days. It’s not for bombing though and falls way short of the Flagship. This light poppy construction does not like pointing it if you are in a similar weight range as most of us above.

The Jones Stratos turned really well through bumps but didn’t power over bumps well. On a pretty clean powder day and groomer day, it was great. However, after 10+ days in varying terrain it couldn’t compete with most of its peers. The chatter was significantly more than the Flagship and most jones boards and literally all of the 10+ freeride boards we tested against it. Even mid-day snow that is still fun for all the other boards had more chatter.  When it got rough it bucked and bounced us around way more than we would have liked. If this had construction similar to the Frontier or even the Jones Mountain Twin this probably would have made our favorites list as the chatter was just not as fun to deal with after perfect morning groomers. Even with our damp boots and bindings.

The disruption in the Jones Stratos side cut does a good job at griping in hard snow but doesn’t grab when it’s soft. Not an ice specialist like full Mag but good for most conditions you want to ride. The bucky/chattery nature kept the edge from holding in harder uneven snow as well as other Jones boards with normal construction.

The Jones Stratos is really quick edge to edge and it borders on being fast edge to edge.  It really gets over on edge quickly but then slows down a bit as you engage the sidecut more.

What I liked the most about the Jones Stratos was how fun it was to make quicker slashy/surfy side hits and I felt like I was on a tri-fin hitting the lip. In comparison to the Jones Flagship, I rode the same day, it was way quicker and turny. The Flagship liked more for longer, powerful drawn-out turns. In good snow it carves really well for this camber profile and it was a blast. The more microbumpy the snow gets the less fun turning is.

The extra set back inserts at almost 40mm apart really do a number on the directional float.. At around a 10″ difference between nose/tail, or a 5″ set back on board at a 22.75″ stance width, there is a lot of directional floats. You need full-sized discs though to use the setback inserts. In 6″ of powder the Jones Stratos wasn’t even trying.

When on reference or centered on sidecut the Jones Stratos is better than you would think. It is very doable.

The Jones Stratos can’t jib well but can ride pipe well and get air well when it’s closer to the reference stance. Setting it back all the way makes it a little light on the tail but it’s still doable.

So for us, the chatter with the Jones Stratos was a deal-breaker when it came to unseating the Flagship as a freeride favorite. If this had a more of a damp ride I would have kept it. The way this board turns and blends with soo many different types of riding styles is really unique. That being said, if you like the Aviator and other ultralight boards like that but want more set back and taper then this will be a great board for you.

We try to get as many images of the Jones Stratos, but forgive us if they're not all there.