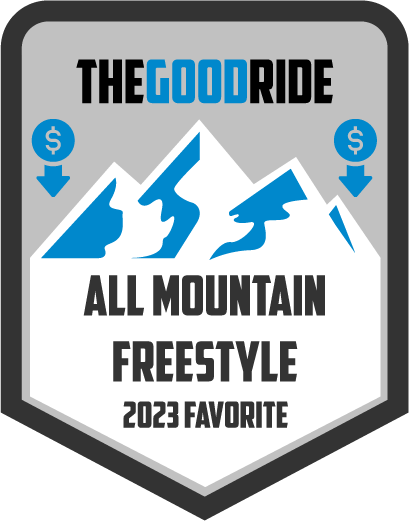 The Capita Outerspace Living is a board we have ridden for many years now, owned and often recommend for those that want a forgiving mountain freestyle ride. Other than edge hold that is somewhat lacking in harder snow, this does everything really well which is all you can ask for from this kind of board.

Approximate Weight: Feels pretty normal to the light side of normal.

Flex/Buttering: Capita keeps evolving the flex with all their boards and the Capita Outerspace Living is no exception. The core seems to have the ability to bend more without breaking but still have a nice snap back. Its camber profile makes it easier to butter than the DOA and Outsiders but it doesn’t quite have the pop those boards do.

On Snow Feel/Ability Level/Skidded Turns: The early rise in the nose/tail going to rocker right after the inserts make the Capita Outerspace Living a very easy ride for all ability levels. It has this stable catch-free ride underfoot that is very forgiving and easy to skid turns with. It one foots well off the chair and tracks well on a long flat cat track.

Edge Hold: The way the Capita Outerspace Living is tuned out of the factory leaves the edge hold a little lacking in harder snow and it let’s go easier than other boards out there with disruption in the sidecut. Some don’t like disrupted side cuts and if you are one of those people you might prefer this board then. If you like strong grip in hard to icy snow then look somewhere else.

Turn Initiation:  Quite a fast turner edge to edge and it can take a hard right or left too without feeling awkward.

Turning Experience/Carving: The mellow camber help makes the Capita Outerspace Living a fun board to turn but it isn’t a powerful springy carver or anything like that. You get a lot more out of the Outsiders and maybe a touch more out of the DOA.

Powder:  So the Capita Outerspace Living doesn’t carve super hard but it does float better than most twins in the capita line. All that early rise makes for a good twin to ride in powder. If you like to set your board back then look to another board as it only rides well centered and you don’t get much setback on board.

Speed: Decent speed but not a board you get if you bomb everywhere. The base has pretty good glide. It’s semi-extruded so while it isn’t the fastest out there it keeps its speed well in all conditions with our without wax. It doesn’t have the high highs but it doesn’t have the low lows that a higher-end sintered base does. Riding on the same day, the Capita Outerspace Living kept its speed almost as well as the DOA and about the same as the Outsiders.

Uneven Terrain: Really good all day resort rider. The Capita Outerspace Living’s evolved core just seems to do better and better with all types of uneven terrain. It’s best for weaving in and out of bumps but

Switch: It’s a twin so almost perfect either way. The only thing that might be a touch better is an asymmetrical twin.

Jumps: Not a huge kicker kind of board but great for small to medium. The rocker in the nose/tail doesn’t have the pop on an ollie as the DOA or Outsiders does but it is still way past being dead.

Jibbing: Very forgiving and doable for all ability levels. The Capita Outerspace Living is the kind of board that even an old and broken guy who isn’t a strong jibber (like me) can go progress on when I’m psyched up enough to do so.

Pipe: The Edge hold isn’t great for hard pipes but we had a lot of fun in the soft spring pipe on the Capita Outerspace Living. Very forgiving and it drove from wall to wall pretty well.

So overall, the Capita Outerspace Living is a great low-cost option for mountain freestyle riders of any ability level that see a lot of softer snow.

Similar Boards (but not the same) That We Compared This To and Boards we like that are similar to it: Capita Outsiders, Capita DOA, Never Summer Proto Type Two, Nitro Fury, Yes Greats, Rossignol Jibsaw, Lib Tech Box Knife, Yes Jackpot, Never Summer Funslinger, Ride TwinPig,

The Capita Outerspace Living is a really fun all mountain freestyle ride that we all instantly got into.   We started out demoing the 154 but then bought the 156 and that was a much better fit.  The only thing we could ask for is a little more edge hold.  It’s a board that offers up a lot of ride for this price and like Capita says it’s very much a twinned out Mercury.  The 2018 Capita Outerspace Living is very similar to the 2017 minus a few tweaks to the overall flex making it a little better.

The 2019 Capita Outerspace Living went from an extruded base to a sintered base.  That seems like a big deal but it actually wasn’t as big as you would think.  The former base was really good and rode like a champ for those that aren’t super consistent technical waxers.  Other than that the ride is pretty similar and the only thing I’d say is there might be a little extra glide when waxed really well. The biggest thing to write home to mom about is the addition of wides for this year in a few sizes.

Flex: Nice medium bordering on med/soft flex.  The 2018 has some slight improvements to the flex making it bend a little better, pop a little better but not by a lot.

On Snow Feel: Really stable between the feet and has almost all the positives that you want from a hybrid camber board. Very easy to one foot and very stable in the flats.  Its got that camber stability without being catchy.

Powder: We had no powder but we did have some slush here and there. Still, you can tell with this camber profile that it will do well for a twin.  It’s not like the Mercury or other directional boards with similar camber profiles you can set back but it’s great for those that want to ride switch in powder.  It’s definitely a step up from the DOA and Outsiders.

Turn Initiation: Pretty quick and poppy from edge to edge and we all enjoyed turning this board.  That’s what separates it from many of the flat to rocker boards is this is fun to turn on the mountain and hangs with the DOA and Outsiders.  Actually, I think I liked this board better.  It felt like it was springy and fun to turn but at the same time forgiving.

Turning Experience: Very fun to make almost any kind of turn and as long as the snow is good it’s going to be good for most.  It’s a butter, turn, ollie, turn kind of board.  All are fun.

Skidded Turns: Easy to skid turns for beginner/intermediates or those that aren’t super technical turners.

Carving: Now this doesn’t blow minds but in good snow, it carves really well for a twin that doesn’t have camber from tip to tail. If it had a little better edge hold it would be a better all conditions carver but for those that only ride in good snow will find it has sufficient spring out of a hard carving turn.

Speed: It’s not a bomber but it has sufficient mountain speed to make it a fun mountain ride.  Some people freak out about extruded bases but for those that don’t consistently wax their boards, it’s probably better to go extruded.  Also, it works well with a lot of different conditions and doesn’t require you to carry multiple temperature waxes.  It’s not sexy but hey when the lights are off (aka base is down) it often feels the same. The 2019 Capita Outerspace Living has a lower end sintered base now that improves the glide a bit.

Uneven Terrain: Handles uneven terrain really well. It was fun at first chair and fun in the sloppy end of the day, spring snow.

Edge Hold: Probably the one place where we would like to see improvement.  We’d love to see more grip.  Maybe the death grip would help or some other side cut technology.

Switch: Other than an asymmetrical twin it’s not much better than this for riding switch.

Jibbing: We had a good time jibbing and even though I’m not much of a jibber it inspired me to hit some small ones.  Jimbo and Matt had a good time with it but both liked the Horrorscope better.  So did I.  So not a super strong jibber but very good for how well it does in other places on the mountain.

Pipe: We didn’t have access to the pipe because it was closed for events the week we had it but as long as the walls aren’t too

Jumps: Great pop and such a lively board to ollie with.

So overall this is a great board for the price (actually thought it would be in the high $400 range) and something that we all would highly recommend as long as you ride in softer conditions.  We’d also like to see this in mid/wide for that growing segment of riders.

We try to get as many images of the Capita Outerspace Living, but forgive us if they're not all there.