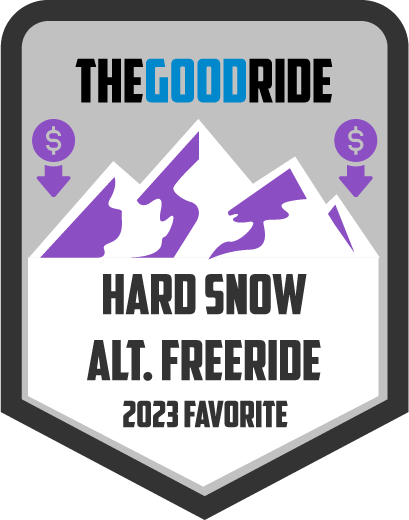 The Yes Y is new for this year but if you rode the 2017 or 2018 model you will know this all too well. You take the shape of the current Yes Optimistic and give it a more mellow camber profile. It still provides a really satisfying turn and floats just as well as the Optimistic even though it has fewer inserts and it comes at a more reasonable price point.

Similar (but not the same) Boards We Like That We Compared This To: Burton Skeleton Key, Gentemstick Mantaray, Korua Dart, Rome Pow Division MT, United Shapes Orbit, Yes Optimistic

Sizing: Just like the Old Optimistic we like to size down as YES suggests. The Y 157 we rode was massively bigger than what I would like to be on. The 154 is for sure doable for my specs but the 151 is ideal. For Grant, the 157 is doable and pretty fun but the 154 is a little more suited for his specs. With sizes from 161 to 151 there is a size for most riders staring with 8ish moving up to 12+. If you are in between sizes it’s often best to size down.

Flex/Buttering: It has a medium/stiff bordering on Medium flex from tip to tail. It’s not a mellow board unless you compare it to the Optimistic with more camber. Not an easy board to butter but doable if you’re a strong rider. The overall personality of the Y’s flex makes it feel like, even though it’s somewhat stiff, you can flex it harder than you would think. It pops well but isn’t super lively. It seems like a balance between being damp without being dead.

On Snow Feel/Ability Level/Skidded Turns: The YES Y is barely good for intermediates and best for more advanced to expert riders. It is more mellow and forgiving than the Optimistic because it has more rocker but it isn’t a chill ride. It can skid turns but it is just short and wide. The side cut indention called Underbite does have some bite and it can make a hybrid camber board like this a little more catchy than it would be. if you understand how to make good turns the YES Y does reward you pretty well and it does have a nice stable feel when one footing and flat basing.

Edge Hold: The Underbite tech with a little indention at each insert really gives a strong grip that is a great choice for those that see harder snow. It also helps you carve in harder snow and doesn’t grab that hard in softer snow.

Turn Initiation: So you could say the YES Y is fast and slow depending on how you describe a turn. The sidecut is deep and it accelerates you through the turn really quickly once the edge is engaged. It is slow from edge to edge though and you can really feel the slower turn initiation when in tighter spots.

Turning Experience/Carving: So the more we ride the Modern Camber Optimistic the less we like the turning experience with the Y but it’s all relative. Let’s look at it this way.  At 449.00 there aren’t many other options out there that offer up such a rewarding turn. I really can’t think of anything else in the somewhat shorter and somewhat fatter world that turns like this at this price. The circle carving experience is pretty fun too and when you get into some clean wide-open groomers the YES Y is a blast.

Powder: So we didn’t get the Y in powder but we got the Old Optimistic (practically the same board) in pretty deep powder and this is close to many dedicated powder boards. You would think that it would float a little better than the Optimistic with the extra rocker in the nose but it’s the same because it has one less insert per binding so it doesn’t set back as much. If you want to build a quiver this is a great choice for those that have a board that’s more like a twin now but want another board to carve perfect groomers and ride powder with. The difference between nose and tail when set all the way back at a 23″ stance width is 7.75 inches or 3.875″ back on board which is pretty good while still leaving a little tail back there for air.

Speed: Even though the YES Y is such a turny board with a deep sidecut it doesn’t become hookey/awkward when pointing it. The base didn’t feel as fast as the Optimistic but it felt more than competent and the board felt pretty damp. It actually felt a little damper than the Optimistic.

Uneven Terrain: Somewhat shorter and fatter boards like this aren’t always ideal in uneven snow and this is no exception. With the YES Y and Optimistic I want to put them both away when the snow starts to get bumpy. Even the old 151 Optimistic I owned that was just like the new YES Y was too much to handle in a super long bump line after a wrong turn at a resort I didn’t know well. After that, I wanted a hug and some orange slices. In a wiggle or banked slalom, it’s super fun though. It does power over chunder super well and absorbs chatter well so you don’t feel it in your joints.

So overall, the YES Y is hard to be too critical of at this price point. It is a great board for those that want something different in their quiver and a good daily driver if you often get good conditions.

We try to get as many images of the Yes The Y, but forgive us if they're not all there.