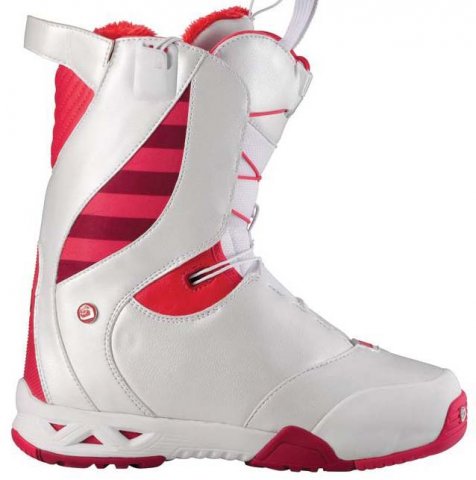 The Salomon F3.0 is the F2.0 with a little more comfort and a little higher end tech.  It’s a pretty aggressive all mountain to freestyle boot that wants you to go big. The addition of a new speed lace system closer to Burton’s easy speed lace system is well received and so is the additional cushioning in the sole.  It makes for an easier to lace and more shock absorbent ride than Salomon offered in the past with the F-Series models.

Out of all of Salomon’s equipment, their boots have the most solid reputation and the F3.0 is one of the reasons why it does.  It doesn’t pack out much and it’s well built.  We’d like to see the F3.0 add some more ankle articulation to improve the life of the flex but the life of the boot is pretty good. The old speed lace isn’t really a speed lace but it the upgrade to the F3.0 has a speed lacing system similar to the Burton Speed Lace which is a very nice improvement over the old speed lace.   The F3.0 has a nice bump in shock absorption compared to its predecessor the F22. It still retains a low profile skate shoe style but it’s more like a traditional snowboard boot now because it doesn’t have that hard sole like a skate shoe.  We appreciated the extra padding and think only a minority of riders will not be happy with more shock absorption.   Also, one thing with Salomon that should be known is that it usually takes a bit of time to break in their boots to make them conform to your feet. With the F3.0, that is not as much as an issue as it used to be in the past.

We try to get as many images of the Salomon Womens F3.0, but forgive us if they're not all there.