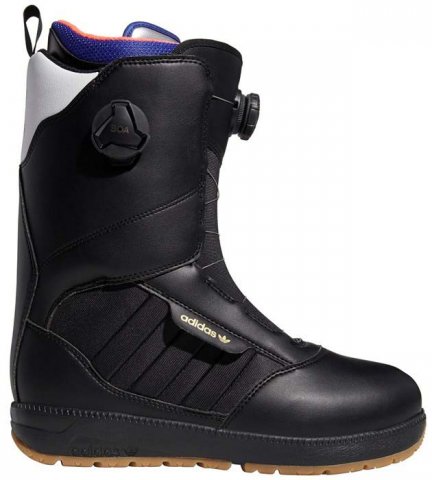 The Adidas Response 3MC is very similar to the 2019 model but has a slightly different take that focuses more on day one comfort over long term flex retention. It’s a great mid flexing boot that works with a wide variety of boards.

Sizing/Fit: The Adidas Response 3MC has the same fit as the 2019 Response and it runs about ½ size too big so it’s best to size down. For example, I am a true size 9 and fit an 8.5 perfectly.  If you are in the UK, Adidas seems to be the exception there and readers have reported they fit true. They also run wide which isn’t a big deal if you run narrow and still has a pretty snug fit around the ankle but a wider footed guy will really appreciate the extra width. I’m right in between a D and E width and I have lot’s of room on the sides. An E or even some EE’s could easily fit these. These run wider than some actual wide boots I have tried. Even Peter with much narrower feet than mine has no problem with Adidas boots.

Adjustability:  Very good upper and lower adjustability and this double BOA is completely separate. So if you like a tighter top of the boot and loose bottom or vice versa you can make that happen. I also love that if you have a few boards in the quiver you can loosen the top to have a little less response for mellower boards and tighten it up for more aggressive boards in your quiver. Traditional lace is still the best for that but this doesn’t do a bad job.

Heel Hold: They do a pretty good job at holding in my heel but I don’t need a lot to make that happen. They aren’t as good as some boots we tried that have Focus BOA that overlaps around the ankle or an inner or outer BOA around your ankle. That is the price you pay though for upper and lower adjustability.   If you have narrow heels and  need a lot of heel hold then you might want to look elsewhere or add boot fitting foam to make them lock your heels in.

Comfort: So over the years, some readers have had one primary issue with most Adidas boots and that is on a forward flex there is some downward pressure from the bottom of the tongue on the top of your foot. I have felt that with some Adidas boots in the past but didn’t feel it with the Adidas Response 3MC this time around. Adidas has done some work to address this over the last two years and while it still might affect some this year should be better overall.

Flex/Flex Retention: The added comfort comes at a price and that is longevity in flex with the Adidas Response 3MC.  It’s not a 20 day a year boot or anything like that but it’s not going to jam past a 100 days with lots of flex left like it used to. As the days go by, you will see less flex but the overall build looks good and it shouldn’t be a sock after 100 days.

Footprint: The footprint of the Adidas Response 3MC is really small and one of the smallest in the industry. It can help you get into a slightly narrower board than you should but don’t push it too hard. In comparison to most boots it feels ½ size or a full size shorter in footprint. This is great if you ride in steep terrain or like to carve hard as they have less chance for toe/heel drag.

Response/Turn Initiation: The response is not quite like it’s name but it’s definitely on the med/fast side at first but once it breaks in you will find it on the medium side for sure. Once broken in, the Adidas Response 3MC won’t overpower most boards you match it up with and we felt it blends in really well with most boards the average rider is on.

Shock Absorption: The Adidas Response 3MC is definitely a step down from the Energy boost boots like the Adidas Tactical Lexicon and Acerra 3STbut pretty good in comparison to most boots in the industry. If it wasn’t for our experiences with Energy boost this would be at or near the top.

Traction: There is a lot of EVA foam on the bottom of this boot but it was saved by the rubber in the front and a kind of reverse horse shoe tread pattern of rubber as well on the back.

On & Off Ease: Double BOA is super easy on and off. The lace lock of the liner slows it down but it’s far from a deal breaker. Definitely on the upper end of the on/off spectrum for sure.

So I think the 100 day a year rider might miss the added longevity of flex but most riders will appreciate the added comfort. Especially since most riders only get 5-15 days in a year.

We try to get as many images of the Adidas Response 3MC, but forgive us if they're not all there.

I have the 2017 version, they are great, no foot pain. The heel hold could be a little better but willing to Put up with this because of comfort factor.

One problem is as James mentioned, the side of front instep area started to kink up a bit after about 25 days. I think there's a weak point there on the outer shell. But still overall great boots. They are at least 1/2 too big ,if not more.

I saw the 2019 version had redesigned outer shell, that looks similar to Tactical Adv, which might help with eliminating the weak points around the area. Have you guys at Good Ride had a chance to ride 2020 version?

Thanks and keep up the good work!

product 0.3
4.0 4.0 1 1 I have the 2017 version, they are great, no foot pain. The heel hold could be a little better but willing to Put up with this because of comfort factor.One problem is as James Adidas Response 3MC 2020 Snowboard Review