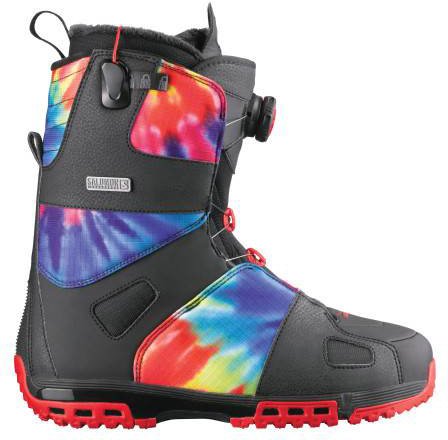 The Savage comes in a Salomon Speed Lace and Boa. The Salomon Savage BOA is one of the only BOA options they have.  You can get speed lace as well and we prefer the adjustability of the lace over the speed of the BOA.  If you don’t care about lower and upper adjustability then you will be fine with the BOA.  The Salomon Savage is rather new and made for someone who wants a more park friendly Salomon boot.  The Savage is on the stiffer side of soft and like all Salomon, boots are built to last a long time.  Some people swear by Salomon boots and others find them a bit narrow and initially uncomfortable.  We like the way the cuff has changed a bit to be more continuous instead of kinked.  It is easier on the top of the ankle pressure point wise when you forward flex.

We try to get as many images of the Salomon Savage BOA, but forgive us if they're not all there.