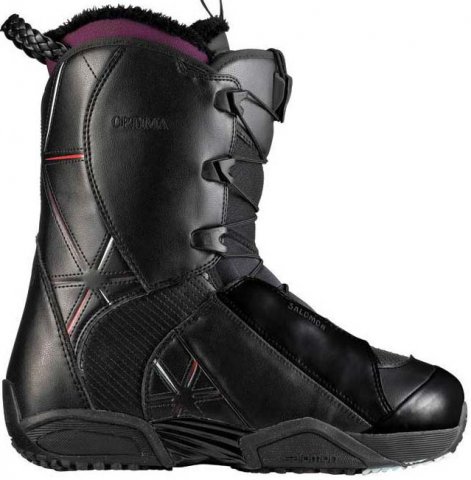 The Salomon Optima is one of the more aggressive women’s boot in their line. It’s made with those who like stiffer more aggressive boards that need a little more leverage edge to edge than the average flexing boot will provide.  The Optima isn’t for everyone but some will really appreciate the semi-traditional lacing system, pretty cushy liner, and all-around aggressive ride. Salomon makes one of the best boots in the industry and has a lot of their own unique tech. The Optima is an aggressive long lasting snowboard boot that can work well for some riders.  We say some because Salomon is known to take a while to break in and can be tight around the calf for some.  This same issue is what makes the Salomon Optima last soo long so if you can get through a little discomfort at first to break them in the Optima could be a solid choice. Some boots in the Salomon line upgraded to a more convenient speed lacing system but the Optima remained the same as 2012.  This is a good freeride to all mountain ride.  It’s also good for those that have stiff all mountain freestyle twins.

We try to get as many images of the Salomon Optima, but forgive us if they're not all there.