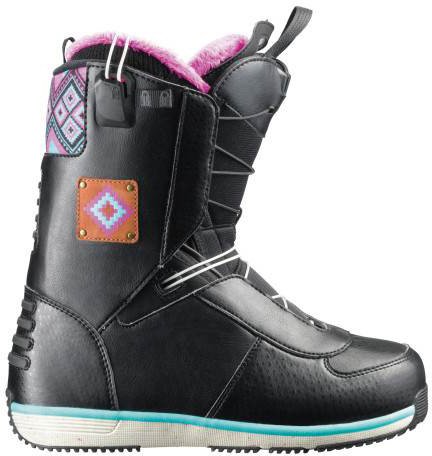 The Salomon Lilly has been around for a while and that is why many people swear by this mid flexing boot. It lasts a long time and works well anywhere in the mountain or park.  The mid flexing does anything type of ride is going to make a wide variety of riders happy with the all-around feel.  It’s also pretty comfortable as well. It’s slow to lace up but the adjustability and performance are worth it.  For 2011 the Lilly added a bit more articulation at the ankle that you could call an articulating cuff.  Salomon just makes great long lasting boots and although this might not be for everyone the Dialogue could work very well for the right rider.  If you have large calves or wide feet Salomon might not be the best choice. The 2013 model has a new speed lacing system that is faster than the 2012.  It’s much more like the Burton Speed Lace with a separate upper and lower lacing system that laces up with 2 pulls. At the same time, there is less ankle articulation so the ankle could break down faster than before.  Still, the 2013 wins due to the much better speed lacing system. The 2014 is pretty much the same as the 2013.

We try to get as many images of the Salomon Lily, but forgive us if they're not all there.