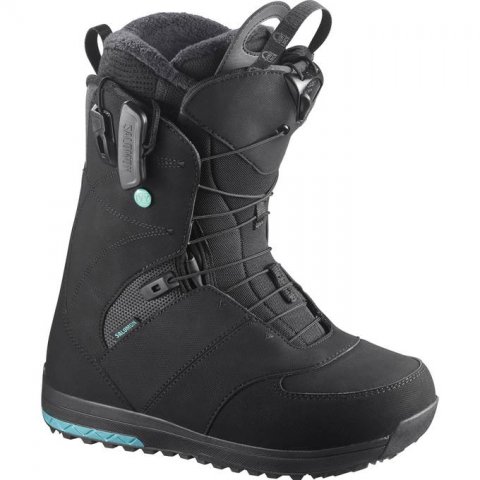 The Salomon Ivy has been in Salomon’s line for a while and it’s a well-liked boot. There are 2 versions for sale this year.  A BOA Ivy and a Speed Lace Ivy with an upgraded lacing system.  In the past, the argument could have been made for the BOA because it was a lot easier than the Speed Lace but now if you like separate upper/lower adjustability then the 2013 Salomon Ivy is for sure the call.

Salomon has a very strong reputation when it comes to women’s boots.  They just know what they are doing.  This medium-flexing boot made for women that like more response but not to the point where it’s overly stiff. Salomon’s lacing system from 2012 on down might be slow compared to speed lace but the adjustability is exceptional and so is the long term reliability.  The addition of the new lacing system in 2013 makes the binding better and quicker than previous years.

The Salomon Ivy will last a long time and work well for just about any rider.  The only issue is they can take a little longer to break in compared to other boots.  This drawback can be an advantage because they do hold their form for a long time.

We try to get as many images of the Salomon Ivy, but forgive us if they're not all there.

I really like these boots, very comfortable, kept me toasty warm even on cold days. The str8jackt laces are a great idea, they lock my heels into place well - no heel lift here, which has been a real problem for me with other boots in the past.

I did manage to break one of the laces after a few weeks, though was yanking it pretty hard.

These boots became very soft after everyday use for a couple of months.

product 0.3
4.0 4.0 1 1 I really like these boots, very comfortable, kept me toasty warm even on cold days. The str8jackt laces are a great idea, they lock my heels into place well - no heel lift here, wh Salomon Ivy Review And Buying Advice