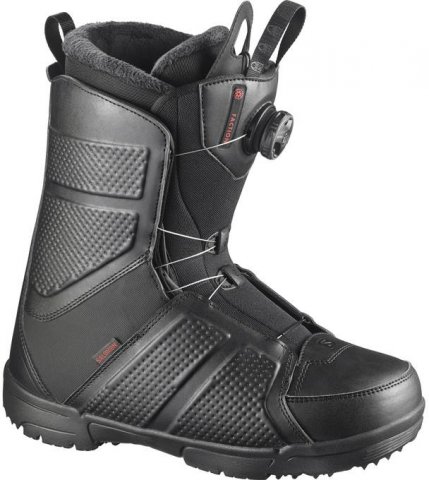 The Salomon Faction comes in 2 styles for 2011 and 2012.  The Salomon Faction BOA and Salomon Faction Speed Lace.  It’s an ok beginner boot but it doesn’t have the same speed lacing system as the other boots in Salomon’s line.  When you pull on the speed lacing handle it tightens the whole boot.  The other speed lacing with Salomon has a way to adjust the lower and each rung of the upper.  If you are ok with the same lacing as a BOA boot then you are ok with this.  In this situation, there is no advantage in choosing the lace over the BOA when it comes to adjustment.  This is a very well made beginner boot but if you are like us then go for the next step up and get more adjustability.

We try to get as many images of the Salomon Faction BOA, but forgive us if they're not all there.

Boot barely lasted 2 seasons before it totally packed down. poor heal hold. toe box got soft and a tight binding pinches my toes. Though i'd love BOA but don't like that i cant adjust top and bottom separately. Try something else.

product 0.3
2.0 2.0 1 1 Boot barely lasted 2 seasons before it totally packed down. poor heal hold. toe box got soft and a tight binding pinches my toes. Though i'd love BOA but don't like that i cant Salomon Faction BOA Review And Buying Advice