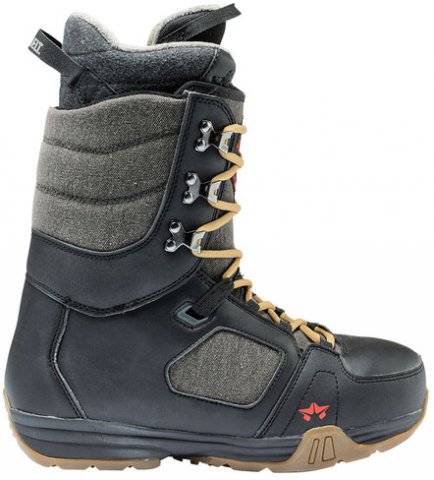 The Rome Smith snowboard boot has been with Rome’s line for a long time. You get a lot for the price as you do with most things at Rome.  The Rome Smith is great for the 20 days a year rider who is looking for something to dabble with everything.  If you are a cheap bastard who likes a soft boot but ride 100 days a year it will hold up for at least the season.  It doesn’t have tech that will blow your mind and we would like to see more articulation in the ankle. Also, the 2012 Rome Smith lacing system is almost like a single BOA.  It’s super easy to lace up for a beginner but you can’t separate the upper/lower adjustability. That being said Rome makes quality boots and at 20 days a year, this will last a long time for the price you pay.

The 2014 and 2013 Rome Smith is not as good as it’s predecessors for one reason.  They did what a lot of companies are doing these days and went to a single mold EVA foam insole.  EVA is shock absorbent, comfortable on a flat landing and lighter than rubber but it wears down quickly and has poor traction.  I’d really like to see a thin layer of rubber between the EVA and the snow/pavement. The rest of the boot is fine for this price range. The sole has deep cleat like molds in it that will provide good traction in softer snow but it’s a major drawback for anyone who has to walk through an icy parking lot.  It’s also nice these days (even in the lower pricing range) to have a reduced footprint from heel to toe so there is less chance of your boot hitting the snow on a turn. I’m not 100% about the 2014 model but 2013 and below had no reduction in footprint and were almost a full size larger than Burton and Ride boots which are the leaders when it comes to reduction. You can’t expect much in this price range but Rome also has a reputation for packing out pretty quickly and also breaking down pretty quickly. They are working on it but it’s still an issue. The one thing I can say is it was super comfortable on your feet so if you can get a good price and just want a boot for a season of learning you could do a lot worse.

We try to get as many images of the Rome Smith , but forgive us if they're not all there.