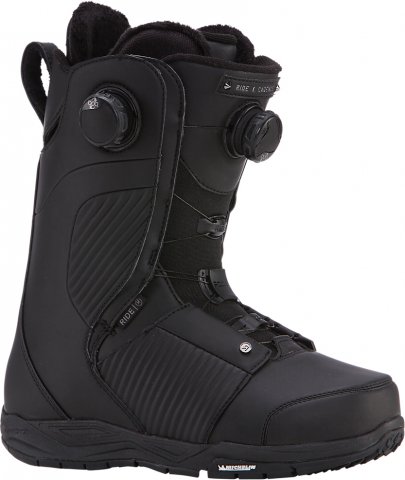 The Ride Cadence is Rides top women’s boot. For 2012 they changed up the BOA from single to Double BOA which is good.  It helps the adjustability a lot but this lacing system has one thing that keeps it from complete lower and upper adjustability. The upper adjusts the ankle and so does the lower so it’s better than single BOA but not quite there with some new double BOA and most speed lace. The Cadence is comfortable and well built. We like the articulating cuff, the new lacing system, and the 3d molded tongue.   The 2012 and 2013 is definitely the call over the 2011 and a good choice for any mostly mountain to all mountain rider that wants a medium to stiff flexing boot. The 2014 is still very similar to the older models but as always has a few minor refinements.

We try to get as many images of the Ride Cadence, but forgive us if they're not all there.