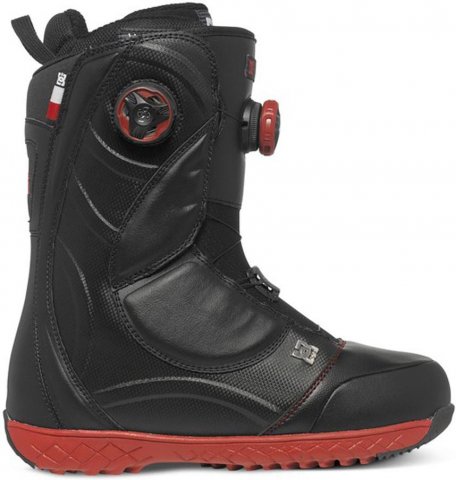 The DC Mora is for the very aggressive rider and loaded with DC’s high-end tech.  It is here to compete with the Burton Supreme and others like it.  Most DC boots have a very flexy forward lean but these don’t.  They are stiff as it gets and rivals the Salomon Optima.

The articulating cuff helps this boot with longevity and the flex shouldn’t change that much over time.  The sole seems tougher than the other boots in the line but is made for impact protection with bigger landings. As a result, the day in day outsole cushioning isn’t as good. DC has a great shell but as of late their liners have not been as comfortable and form-fitting as they use to be.  It’s not a deal breaker but it can take a little longer to break in the boots.  Also, each foot is different so you could read this review and they could be comfortable day one.  One of the best parts of the Mora is the new BOA system in the 2012 model that is just like Burton’s speed lace. Many Double BOA boots share the middle part of the ankle so the upper and lower tighten up the same spot.  The Mora has a completely separate upper and lower BOA system which makes this excellent when it comes to adjustability.   All in all the DC Mora is a great boot and one of our favorite Double BOA boots out there.

We try to get as many images of the DC Mora, but forgive us if they're not all there.

COMFORT:
I work as an instructor, so I wore these boots 40+ hours a week for months straight and often while walking up and down the bunny hill repeatedly, and never once did my feet hurt in any way. Part of this is because I carefully tried on many many pairs of boots at my local shop until I fond a perfect fit, but I'm pretty sure these boots would be comfortable no matter what. The lining is very soft and comfy and they have a really cushy insole. The lining is also heat-moldable, which also helps. The double boa is really nice too, because you can adjust the tightness exactly how you want it. I also never get any heel lift in these boots, which I assume is partly due to the boa and partly just to having well-fitting boots.


FLEX:
I bought these for comfort and didn't really pay attention to flex, but when I got to the mountain and tried to turn for the first time, I nearly threw myself to the ground because I wasn't used to having such stiff boots. Once I got used to them and broke them in, though, I started to really like how responsive they were, and I feel like the support they provide keeps me from getting as fatigued because turning takes such little effort with them.


DURABILITY:
After about 70 days, one of my boa dials broke. Luckily, it was still useable, but I had to wind the cords by hand and then pop the buckle back on for a couple of days until I got a new one. Boas have a lifetime warranty, though, so I was able to get a new one for free in just a couple of days, and it wasn't too hard to fix. More importantly, the stitching started to rip out on the side of the boot, also probably around day 70. Since then, it's gotten progressively worse, so that now at day 120, when the boa cord tightens the outside part of my back foot, only the insides of the boot tighten around my foot and not the shell. (Note that this is NOT from resting my board on my boot while on the lift because I am careful not to do that.) I should probably get new boots at this point, but the other boot looks brand new still, to the point that people asked me around day 100 if I had just gotten new boots (until they saw the other boot and its ripped stitching). I noticed, however, that the 2018 version of the Mora now has a strap that goes right around where my seems ripped, so I'm hoping that this is a sign that they have noticed and addressed this weakness, because otherwise the boots look and feel very nice after ~120 days.

COMPATIBILITY
The only other issue I could see with these boots is that they seem pretty big. They fit true to size, but they definitely don't have any sort of footprint reduction tech, because they appear big on the outside (for women's boots at least) and I had to adjust my bindings (medium trilogies) to accommodate them. The boots also have wide calves, so if you have wide calves, I'd definitely recommend these, but if your snow pants are cut really skinny, they might not fit over these boots or they might look a little weird.


OVERALL
Unless I decide to go with a softer flex, there's a good chance I'll buy another pair of these because they are still supremely comfortable and I really have put them through the wringer, so I feel like the damage is mostly justified.

We have the 2013 and 2017 DC Mora.
The liner for the 2013 Mora was thin and there were lots of pressure point when it was new.
A specific BOA tightness and tongue position has to be dead on in order to resolve the issues.
Liner packed out in less than a season.
Boots are still going strong with after market liner.

The liner for the 2017 Mora seem much more comfortable.
However, the upper and lower BOA both tie the middle of the ankle point.

BOA allow on the fly adjustment. If you adjust your boots multiple times a day, it is a no brainer.

product 0.3
4.5 5.0 2 2 I have the 2017 MoraCOMFORT:I work as an instructor, so I wore these boots 40+ hours a week for months straight and often while walking up and down the bunny hill repeatedly, DC Mora Review And Buying Advice