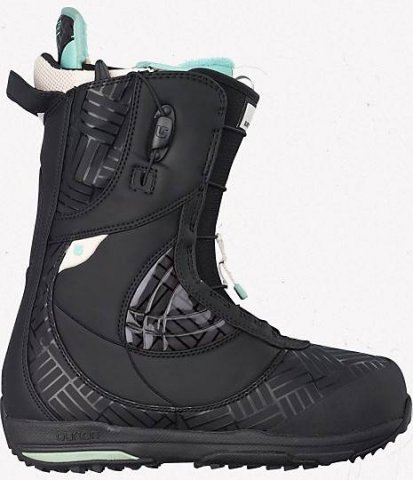 The Burton Q boot is very close to the Men’s Burton Ion for women. It doesn’t quite have the magic that the Ion has but it’s pretty close. That means it’s a high end and very responsive boot made for people who like a more from a boot without it being too stiff. It doesn’t have the insane dampening/cushioning system that the Ion does but it’s still excellent.

You can say what you want about Burton but you can’t deny that they make a good very comfortable boot.  Expensive? Yes! but the performance and comfort come close to the price.  In 2010 the Burton Q softened up and although still pretty responsive it was just too soft and it had a tendency to fold at the ankle.  In 2011 there was a little more stiffness added as well as a response but the boot still remains on the softer side.  Rubber padding was added to the area where it folded in 2010 and this was stopped. Also, they put a better handle on the speed lace as well as strengthened the lacing.  In 2012 the fit was re-designed to be more comfortable but the old Q’s were pretty comfortable as well.  The Q is a unique ride and we have nothing bad to say about it. So 2012 is the call but 2011 isn’t bad either.

We try to get as many images of the Burton Q, but forgive us if they're not all there.