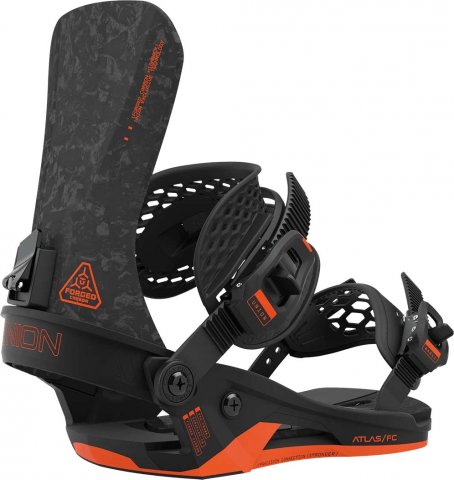 The Union Atlas FC is a super stiff, super-responsive version of the Union Atlas and the only super expensive/ultra techy binding in their line this year.  It’s not for everyone but if you invested heavily in video conferencing before COVID-19 and want an incredibly stiff/responsive binding to power a board that turns slow this might work. For the rest of us, the regular Atlas or Falcor will be more than enough and provide more shock absorption.

Approximate Weight: At 2.0 lbs it’s pretty light but not the lightest in the Union line. That goes to the Contact Pro and Falcor at 1.8lbs but it’s 0.2 lbs lighter than the Atlas.

Highback Flex: The Union Atlas FC’s highback is incredibly stiff and just bit hard into my even featured calves. This was a deal-breaker for me after a few turns but if you want a super stiff highback then this might be a deal maker.

Binding to Boot Adjustability: The way the Union Atlas FC can adjust to fit around your boot is pretty well done. Other than high back rotation it has all that the Atlas has and that is one of the best bindings in the industry for getting your boot centered in the binding and therefore on board. It has an adjustable heel loop and gas pedal where most bindings might only have an adjustable gas pedal. Some even have none. The inability to really rotate the highback was a big problem because I could not alleviate all that calf bite from these stiff highbacks. The straps are tooless and so is the forward lean adjuster.

Stance Width Adjustability: Because you can center your boot in the bindings you can turn the discs tip to tail and really dial out your stance width. The discs don’t have a continuous channel as they did in 2020 and below but they still have lots of room to slide each way. They are compatible with Burton Channel system boards too.

Boot Support: The ankle straps of the Union Atlas FC have lot’s of support and surface area but also isn’t super stiff like the rest of the binding. They are really comfortable and seem to work well with a forward flex without biting into the boot. The toe strap is bigger and doesn’t fit around the boot as well as it used to. It sticks up a bit at the top and bottom of the strap but it still grips to my boot really well. These straps are very good but there is always the option to get other straps here if you want to mix it up.

Ratchet System: The ladders this year seem to be a bit thinner and softer than the Unions I own from last year. I liked the thicker straps better but the ratchets are still really smooth and some of the best in the industry.

Turn Initiation/Response: The Jones Ultra Mountain Twin is not a fast turner and the Union Atlas FC made this board turn quickly without even trying.

Flex Under Foot/Buttering: It’s not bad for a binding that is soo stiff but if you want a nice balance of butterability and response, then it’s all about the Union Falcor and it’s mini-disc.

Shock Absorption: Initially in the Union Atlas review I referenced it as pretty good and it’s not bad but after directly comparing it to the Union Atlas the Atlas FC is not even close to being on the same level. The stiff carbon doesn’t absorb what’s going on under foot and it makes riding in uneven snow pretty tough. You at least have some dense rubber like foam to keep it from being seriously painful.

So for me this is just too expensive and too stiff. I’m more than happy with the Atlas. That being said the Union Atlas FC could work for those that feel you can never goo too stiff or have too much response.

We try to get as many images of the Union Atlas FC, but forgive us if they're not all there.