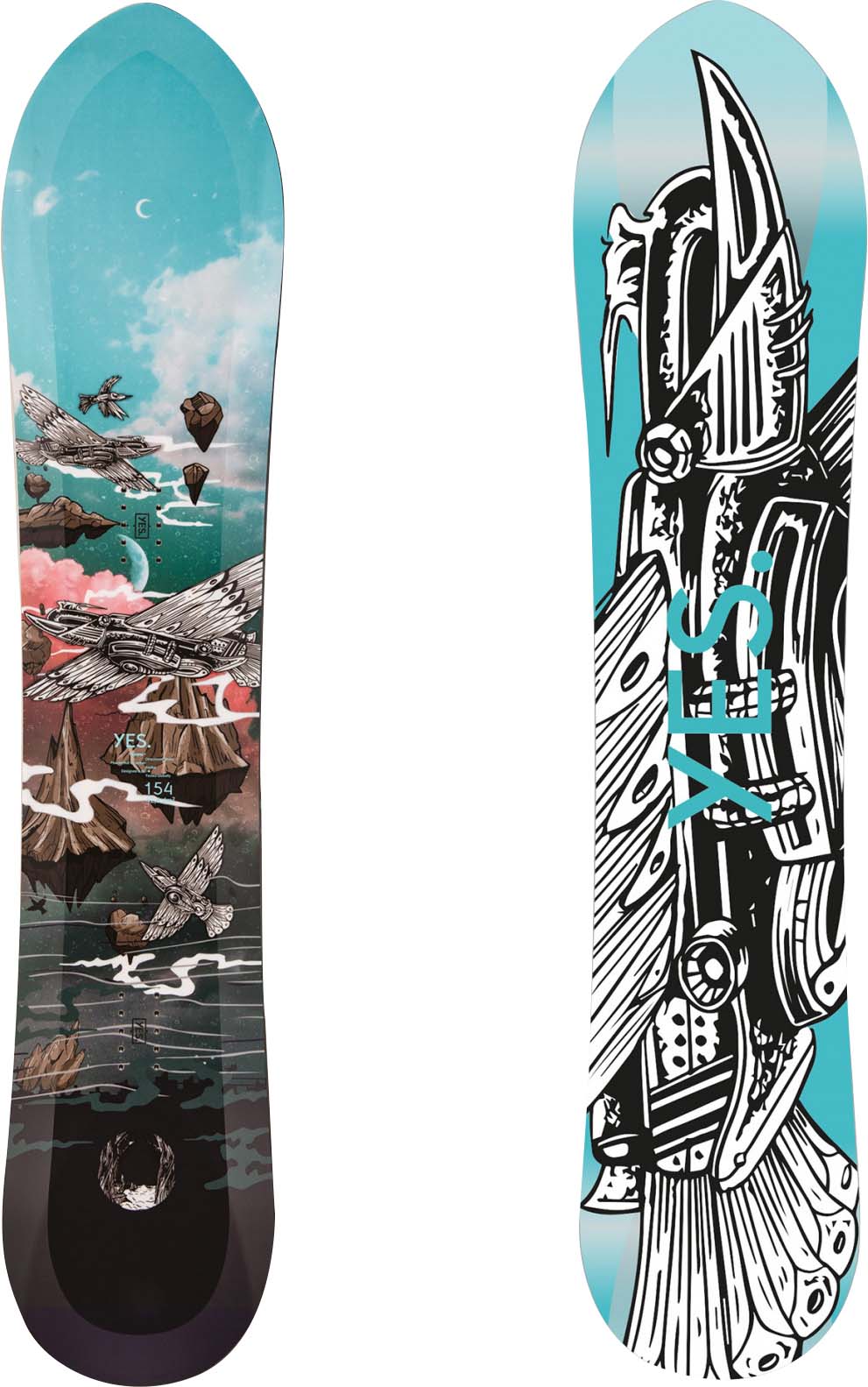 The YES 420 PH is a very unique ride. It gives you a camber feel in groomers and powder but thank god it doesn’t float like a camber board. 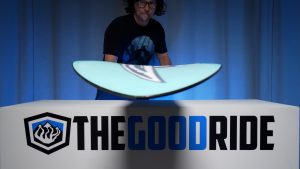 The YES 420 PH eels normal bordering on light for how short and wide it is.

Here are some ideal US boot sizes for these boards. You can of course go bigger or smaller but these work best for not turning the board slower than it should be and not having the dreaded Toe & Heel Drag.
154: 9-10 for powder and 11-12 for groomers and powder.

The YES 420 PH has a pretty locked in feel to it. There might be a touch of early ridse but it felt much more locked in compared to the Hybrid and Y. Even the Optimistic felt a touch less locked in. Not easy to skid a turn and its best for advanced to expert riders. This camber profile is really unique. No one else does this. It has camber at the edges but has hulls going from the nose/tail almost all the way to the insert packs.  It floats incredibly well in powder but feels like a hollow camber board on groomers.

The shape of the YES 420 PH is tapered and directional but it doesn’t feel super tapered, set back or washy.

Fast. Very fast for this shape and design. I thought the YES 420 PH would feel more chattery with this hull tech but it is pretty damp. Yeah you see a little chatter in the nose/tail but it quiets down pretty fast before coming into the bindings.

The YES 420 PH is not a board I want to be on in big bumps because it doesn’t turn quickly but powering over tracked powder was pretty easy. It does very well powering over most conditions and doesn’t get cranky in microbumpy uneven terrain.

No disruption for better grip in hard to icy snow but still pretty competent.

So riding this in only spring conditions with no powder kinda sucks but the YES 420 PH surprised me with how well it did with hard turns. I just needed more of a wide open groomer to make it shine. There is a very springy powerful turn to this.

Excellent float and that is why you buy the YES 420 PH. There is about -4.625” back from center of board when set all the way back at a 22.5” stance width. That is pretty good but not too much to make you feel like you are riding the tail too much. If you like to get air this is a good board because you will feel more centered than many surf inspired rides out there. It is definitely a different feel compared to the normal 420 along with other hybrid camber profiles like the Y, Optimistic & Hybrid.

So if you always wanted an old school camber feel in powder with new school unsinkable float this is the only choice.

The Yes 420 Powder Hull takes the Yes 420, makes it camber with a hull in the tip and tail making it a very unique board.  It feels almost like a camber board with hollow points where the hull is on groomers and then has float similar to a rocker board in powder.  It’s a very different feel in powder and feels like a camber board that doesn’t want to cartwheel. It turns better than the Yes 420 but isn’t quite there with the Yes Optimistic, The Y or The Hybrid.

The 2020 YES 420 Powder Hull is the same as the 2019 but this review has been updated to reflect how it performs in powder and how it compares to other rides out in 2020.

Flex: It’s pretty medium-stiff across the board but on snow, it’s a little softer in the tip/tail.

Sizing: The 154 feels a little wide but it is supposed to and for sure works with my size 9’s and I think it can handle a little bigger boot size without it losing its overall short/medium-fat personality.  Even though it’s a wide waist I wouldn’t suggest it for a big guy with a large foot though.

On Snow Feel/Ability Level/Skidded Turns: The Yes 420 Powder Hull has an interesting ride to it and it doesn’t feel as short/fat as the standard 420. It’s a lot more fun on groomers but still is more of a powder board than, let’s say a board like the Yes Optimistic that’s equal parts groomer and powder. It’s got a stable feel underfoot but it doesn’t feel super forgiving and easy to skid a turn since it’s mostly cambered along the edges. It tracks well though along cat tracks like it’s almost a full camber ride, one foots super easy and needs a little attention to detail when skidding a turn.  It’s not a mindless skidded turn like the 420 but it’s got a lot more personality when turning. It was hard for Peter and me to wrap our head around at first but the more we think about it the more the Yes 420 Powder Hull feels like a catamaran was mated with a snowboard.  It feels hollow after the edge in the nose and tail which is a really interesting feel underfoot. Some might like it and some might not.

Turn Initiation: The Yes 420 Powder Hull isn’t super fast but it’s pretty good for what it is with this kind of width. The somewhat smaller size, when on edge, turns pretty quick though and it is faster edge to edge than the standard 420.

Turning Experience: Here is the surprise. The Yes 420 Powder hull is no Yes Optimistic when it comes to making good turns but it actually does a great job for what it is when going out to make some groomers. I wanted powder but was happy I got to see how it turned on groomers.  You can feel the part of the board along the edges acting like hollowed-out camber if that makes any sense.  If you ever tried boards with lifted sides it’s exactly the opposite. The middle feels empty but the sides are trying to act like camber and it almost pulls it off.  There isn’t a washy weird feeling or a surprise where you feel like you have camber, commit to an edge and then realize you don’t.  Instead, the ribbed camber holds enough to make it feel like camber but doesn’t feel quite as confident with soo much of the middle lifted far off the snow.

Powder: So after years of riding this we finally got lucky and rode it in powder. It was about 1′ to almost 2′ of somewhat thick powder in some places so Peter and I finally got some time so see what this board is all about. It was at the end of a demo day and sorry but I just didn’t feel like filming. There is undoubtedly easy directional float with rear leg burn but it’s different than any other board we tried. It’s hard to explain. When turning you feel the edges further down in the snow than the hull. So it’s kind of like a catamaran if the float came from the center where you sit on the boat. Feeling those edges in the snow makes it slower when turning than a board with rocker in the nose. It gives a slight sensation of carving on groomers in the way that the edges feel more committed into the snow than with a normal powder board with rocker in the nose. It isn’t good or bad but just personal preference on how you ride powder. We were more into the way the Optimistic, The Y or the Hybrid (probably because we are used to it) turns but it is a pretty cool sensation when the hull hits deeper powder and lifts the nose up out of the snow. Even with the limited stance options, when set all the way back at a 22.5″ stance width, there is still a 7.5″ difference between nose tail, or 3.75″ setback on board. That’s pretty good for a 154 when it comes to directional float.

Speed: The lifted middle in the tip and tail makes the camber ribs chatter a bit more than a standard camber snowboard but it’s pretty damp picking up some speed. It feels a little more chattery than a standard hybrid camber board from YES. The base has pretty good glide and when waxed well it should keep its speed.

Uneven Terrain: The Yes 420 Powder Hull is not the board I want to ride in bumps or messy uneven snow but it’s ok for what it is.

Buttering: Not super easy to butter but doable.  A little easier in the nose than the tail but overall ok.

Switch: I rode this switch a bit and again, it was doable but far from perfect.

Jumps: Nice pop off the tail for most of the tail being lifted way off the snow in the middle.

Pipe: didn’t even think about it but I’m usually not a fan of super fat boards in the pipe.  Some might like it though.

So overall, The Yes 420 Powder Hull was pretty fun and I think could work as a super fun quiver ride for many or even act as a full-time powder board for others. The biggest bonus is it’s pretty good on groomers compared to most true powder boards.

We try to get as many images of the Yes 420 PH, but forgive us if they're not all there.