Turn Ons/Swipe Right: Very versatile. Easy Flex to butter and generate air. Not damp but does not pass chatter into your joints like many salomon boards.
Turn Offs/Swipe Left: Can be a little bucky and bouncy in uneven terrain.

The Salomon Highpath has a similar but softer flex personality of the Dancehaul but in a more all mountain friendly package. It isn’t the dampest ride but it is a very versatile board with decent directional float, a good centered feel on groomers, good edge hold and pop. 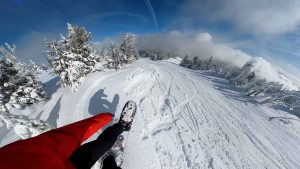 I rode this against the YES Standard Uninc, Nidecker Escape, Escape Plus and Thruster. All with the Burton Kendo’s and Union Atlas but I did sometimes use other boots and bindings.

The Salomon High Path is on the lighter side of normal but it isn’t an ultralight. (We don’t put in the exact weight because with wood cores there is no consistency in a boards weight)

The 159 Salomon Highpath felt ok for my 185lb but a little wide for my boot size. I would like to try the 156 as it seems like a better fit for my boots. My only concerns with the 156 are my weight. I hope it won’t make the board more bucky and bouncy at this weight but I would say this seems to appeal to lighter riders than myself.

For weight I would stay close to the Brands recommended weight ranges. If it comes down to boot size or weight, I would make sure it fits your boot first and then your weight a close second.

The camber that extends well past the inserts isn’t a traditional bow. Instead, you have a modest amount of early rise before the nose, to abrupt camber, to flat (off the ground), back to an abrupt camber, and then a little bit of early rise before the tail. It makes for a stable to semi-locked in personality that is ok for strong intermediates but best for advanced to expert riders. It is ok skidding a turn but I’ve ridden many hybrid profiles that are much easier. 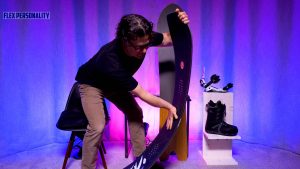 The Salomon Highpath has a pretty mellow flex for a board like this. I would say the demo I had was medium bordering on medium-soft. The unique camber profile described above seems to allow a mellower flex in the middle where most boards like this actually bend more before the tip/tail. What ever they are doing here tech wise, the result is good easy accessible pop and a board you can easily butter. 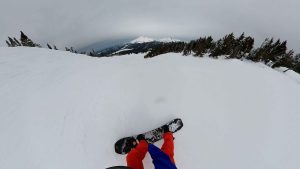 My one complaint about the Salomon Highpath is in uneven terrain like uneven wet spring powder or messy spring snow it bucked and bounced me around a little more than many of it’s peers. I don’t want to loose the pop or butterability it has though so don’t know what would fix it. The good thing is it still isn’t a deal breaker. Even better is the Salomon Highpath doesn’t get cranky in harder micro bumpy snow and pass up all that chatter into your joints like many Salomon boards I’ve ridden in the past do. It is often the boards with cork or some type of wood in the sidewall instead of ABS or Urethane etc. There could be more to the construction but that is what I noticed.

The base glide is good and I like the structure it comes with. It isn’t too aggressive and also isn’t too mellow.

When it comes to pointing it the Salomon Highpath does alright on clean groomers but you don’t get this for going fast.

I was really impressed with the grip on the Salomon Highpath. It felt like many disrupted sidecuts in the way it held in hard snow. Even better, it doesn’t grab in soft snow. I have always liked Salomon’s quadradic sidecuts like this in the past and this is no exception. 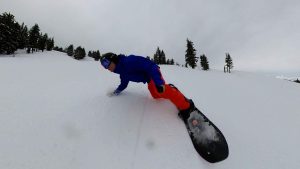 So I really liked how the Salomon Highpath turns and if you lay into it you get some good spring out of the turn. It isn’t a carving specialist because it’s a little to soft for that. However I really enjoyed turning it. Overall, there is a pretty balanced turning experience. It won’t get weird on you with any kind of turning radius but also not exceptional at any one thing like a good one board quiver should be. 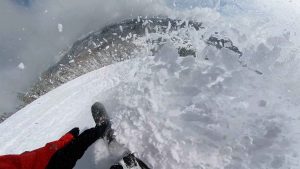 At a 22” stance width set all the way back you can get -3” back on board which is really good. I thought the Salomon Highpath would have more of a directional floaty feel but it was a little less than expected for this kind of set back on board and more in line with most good all mountain boards in powder. 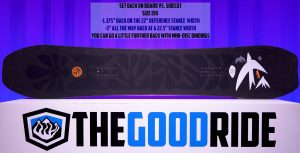 The Salomon Highpath rides switch very well for having a -20mm set back on sidecut and -3mm of taper. I found myself flipping it around switch more than I thought I would and it felt good. I didn’t hit a lot of kickers in the park but you could feel it would be competent there. Same in pipe. The softer flex and flat in the middle would do well on Jibs if you want to go there.

So overall, I really enjoyed my time on the Salomon Highpath. It’s not super damp but it is has a very versatile set up. It shines as a one board quiver for those that like to butter and pop off hits throughout the mountain but still want to have something that can turn well and ride pretty well in powder.

We try to get as many images of the Salomon Highpath, but forgive us if they're not all there.