Turn Ons/Swipe Right: Ride a solid board and bindings in the slackcountry. Light & Easy for uphill travel. Drift before the Lifts.
Turn Offs/Swipe Left: Bad in Hard Snow. Not good for Long Tours. Straps hard to get on/off and don’t have side hill support.

The Drift Carbon Drift Boards look like snowshoes but act nothing like them in the best way possible. They travel like mini split boards/approach skis and make uphill travel with a solid snowboard incredibly easy. Carbon Drift Boards aren’t perfect, but our crew just can’t live without them. The ability to take solid boards and bindings up before the lifts open (Drift before the lifts) changed our lives. 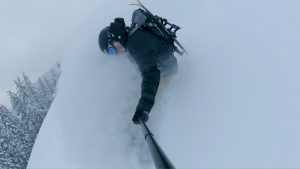 The Carbon Drift Boards are basically the size of a snow shoe but made to work like a split board. They are flat underfoot and have skins on the bottom. For 2021 there are these changes.

Carbon Drift boards and Oxygen Drift Boards blow doors over snow shoes. In fact I never want to snow shoe again. Even in harder snow I’d rather put crampons on the Drifts than use snow shoes. Sliding up instead of stepping up is massively easier. There is literally no reason I can think of where I would recommend snow shoes over Drift Boards.

The new skins have better glide and better grip. There are many out there that are better in some conditions but these are really good for all conditions touring. Especially powder.

The old edges were just carbon fiber. They could splinter and hurt your hands. Now the new urethane edges are much safer and more durable.

In the past the only split board bindings that would fit are the Union Expeditions because they had built in risers. The screw spacing was too far apart. They fixed that for 2021 models moving forward.

This isn’t a deal breaker but it would be cool to have a little spring in your step from camber like I get from camber split boards. Drift Boards are still easier than Splits going up because of the light weight but if you added some camber spring as well it would be glorious.

This is a bigger deal for me and our crew. In comparison to split board bindings the Carbon Drift Board Bindings are lacking. They are hard to get on and off. They are not very supportive side hilling either. I wish they could evolve the straps so they offer more support and have an easier on and off.

Not Good For Long Tours or Hard Snow

If you go on long tours split boards are better. They do better with long treks through flatter terrain. You can also put more into your pack up top and not have to worry about having a board there all the time.

Not fun in windy treks uphill

It can act like a sail if you have a bigger board and it can be taxing.

The dark top makes snow stick to the topsheet on warmer/spring days more than the Drift Board Oxygens.

Even though the Carbon Drift Board’s straps aren’t easy to get on and off the overall transition time is very fast compared to split boards. It feels like half the time. Not having to deal with skins and put your board/bindings on makes it really easy. All you have to do with Drift Boards is put them and your poles on your pack, strap into your solid and go. For early morning power laps before the lifts open this is key.

So even though the Carbon Drift Boards don’t have camber to spring you forward they are incredibly light. At 2.6lbs vs. around 6.5lbs for most split board set ups you are cutting a ton of weight off your feet. Even the lightest split set ups are around 5.5lbs. That is where it counts the most as most experts say 1 lb on the foot is equal to 6 on the back. In same day comparisons between my splitboards and Drift Boards I felt like I had two Hobbits dry humping my legs while going up when I was on my split.

If you haven’t split boarded before these Carbon Drift Boards will take some getting used to.  Here are some things I learned the hard way when starting out that I can pass on to you.

When you go down you don’t even notice them on your back.

Only Option For Pow Surfers

If you like to no-board/pow surf then these are the only solution that will work if you want to keep up with split boarders.

Ride Your Solid where you might take your split

This is huge and I saved the best reason for last. Riding split boards and split board bindings is not like a solid snowboard and solid bindings. Split Boards are a great tool for backcountry travel but riding a solid

Every year people die in the Backcountry. Not just from avalanches but from many other things like getting lost in a storm. Start out using these Carbon Drift Boards for early ups in bounds and patrolled/safe slackcountry areas at your local mountain. If you like that and want to do more take an Avy 1 class. Even if you are in bounds shit can happen so make sure you have everything in your back pack needed to get out ok.

The Carbon Drift Boards are something that changed my crews life. We all still split board but we all love a Drift before Lifts on a powder or good groomer day. We even like these on short runs in the backcountry. Let’s face it. No split is even close to riding a solid board with solid binding on. These let you take solids to places they couldn’t easily go before.

The Drift Boards are a split board alternative for those that want to take their solids on short to medium slackcountry or backcountry runs. It is a hybrid of a touring ski and a snowshoe with skins permanently attached to the bottom. Everyone that tried these in our crew ended up buying them. Taking a Drift before the lifts is our go-to on powder days. We don’t get paid for this but you can find them Drift’s Website if you are interested.

1. The top sheet is glassed so it’s more durable.

2. There is a hard urethane edge instead of a carbon fiber edge.

3. There are new skins on the bottom that grip and glide better than the old ones.

The plus side of Drift Boards: 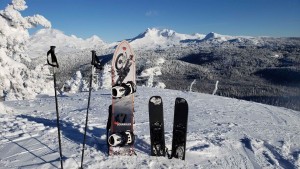 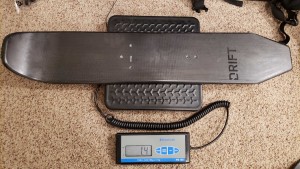 Difference: 3.85 lbs per foot. So based on that study it takes 24.64 lbs off back per foot or 49.28 lbs total. Take -11 lbs for the average board on your back you get 39.28 lbs.  I haven’t dried Mtn Approach but the older models were about 6lbs per foot each and had a pretty big footprint on the back. I think they are making a newer and lighter model and hope to test it.

So…yeah whatever that means. I can say that using Drift Boards instead of Snowshoes felt like it was almost twice as fast and massively less exertion even on the first day I did it with really shitty form.  A few days before in about the same depth of snow, it took me about 40-45 min to get up about a 3/4 mile ascent in snowshoes. I was up in about 20-25 minutes with Drift Boards but with massively less exertion. Being able to hop on the skin track and not worry (well too much) about agro pre-work skinners passing my out of shape ass was really cool.

You have a much more normal gait width when going up. At 6.75″ wide they aren’t spreading your legs out as much as snowshoes do so that’s easier too. The bottom line is everything about these is easier except for having to put on the Drift Crampons if you hit hard snow but who cares when you are that far ahead compared to snowshoeing.

They also have crampons to put on if you hit some hard to icy snow to keep your traction but the edges don’t work well in hard snow.

They are expensive but 1/3 the cost of an entry-level split set up.

There are a few drawbacks of Drift Boards vs. Split Boarding:

So I wouldn’t say these are going to make people pissed they just bought a split and used splits will start popping up everywhere on Craigslist. Far from it. However, these Drift Boards for sure do kill it for people who dabble in short uphill travel at their local resort.

It also is great for riders that like different boards for different conditions. It’s about 1/3 the price of an average split set up and it opens up your whole quiver to new terrain. So I think in many situations going with Drift Boards over Split Boards is the call. Or it’s a great addition for those that split but also want to ride some of their favorite solids on shorter backcountry runs.

I can now ride whatever I want and not have to ride the same split every day.  For a gear whore like me, that is glorious. It makes drawbacks far from being a deal-breaker. The positive aspects of the Drift Boards outweigh the drawbacks.

Just please be safe! Don’t go stampeding off to the Backcountry and kill yourself. Take an Avy class, get the right safety equipment, use common sense and do it right.  It’s dangerous out there.

We try to get as many images of the Drift Carbon Drift Boards, but forgive us if they're not all there.

Create your own review
The Good Ride
Average rating:   0 reviews
List Price US $498 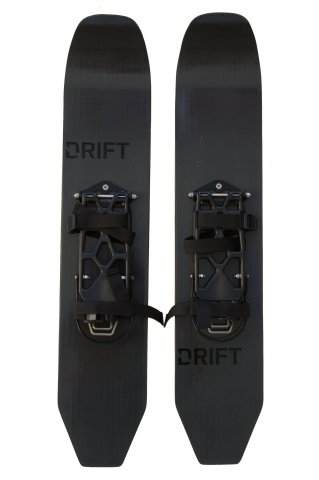