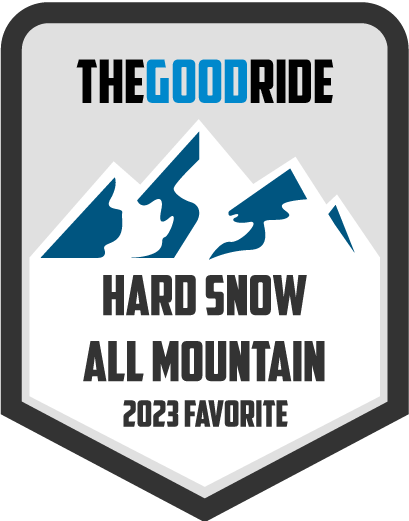 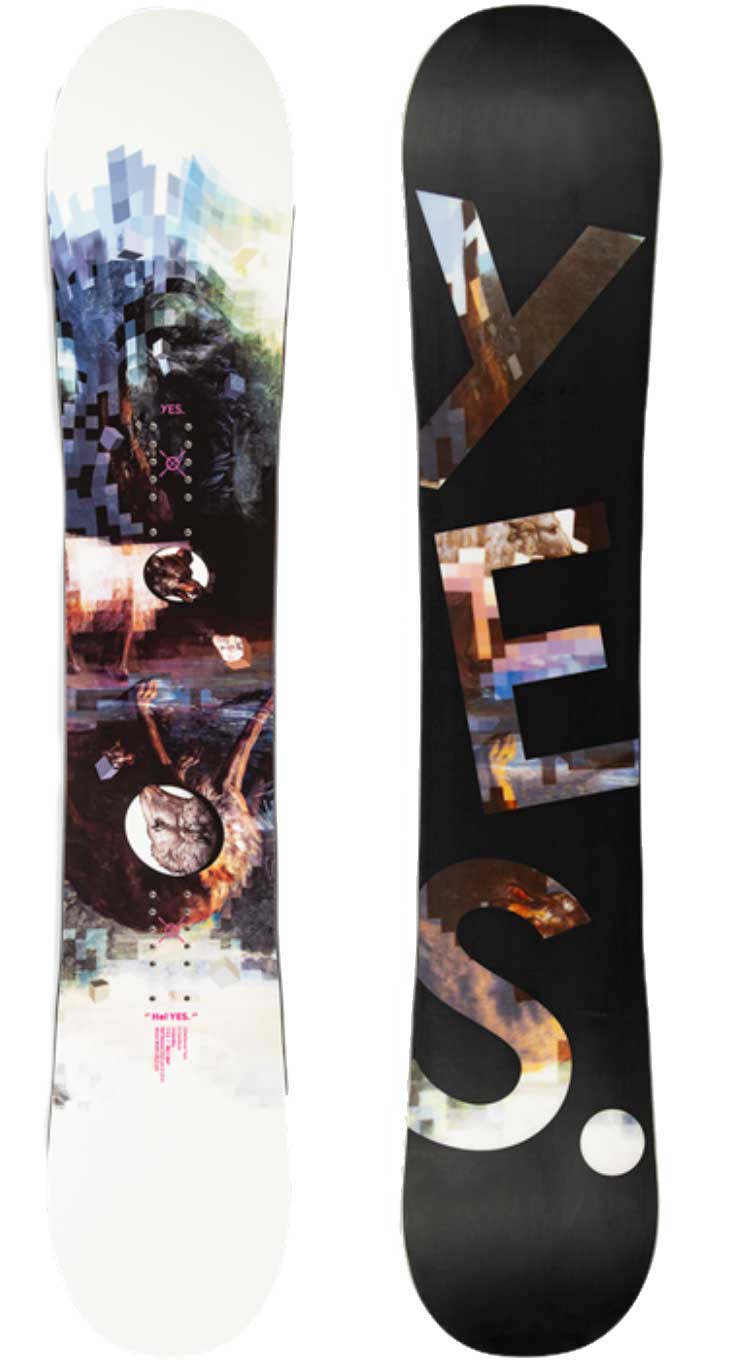 The Yes Hel Yes is great for intermediate to advanced riders. It is a one board quiver that can do it all. It is a stable fun ride that can charge hard but isn’t too serious. And it rides great in icy conditions as well as powder.

The Yes Hel Yes is the first true women’s specific model in their line. Before the Hel Yes, there were smaller narrow men’s boards. But this is the first Women’s only board from Yes.  It’s great for those that want a board they can ride centered on groomers and set back on powder.  It’s also a strong board for those that often see harder conditions.

An exciting new addition to the Hel Yes for 2021 season are the slambacks! If you like to set your board back in powder and ride off the tail, the slambacks are a great new feature. For a directional twin that already rides well in powder the added inserts will give it even more versatility. The only down side to these is they only fit full size binding discs. So if you ride mini disc bindings they will not be compatible.

The 2016-2018 Yes Hel Yes comes from SWS out of Dubai instead of GST from Austria because GST closed down.  It’s got a livelier core that’s a little more snappy and a little less stiff than before giving it a slightly mellowed ride that many will like. Now it borders on not being called an Aggressive Mtn ride and appeals to a wider variety of riders. The 2018 Yes Hel Yes didn’t change much or at all from the 2016-2017 models except the reference stance width narrowed a bit.


On Snow Feel: The Yes Hel Yes is a very stable. It is a tiny bit catchy like a camber board. And it’s got an aggressive feel for those that like to carve hard when there is no powder. And then surf powder when it dumps. It’s a fast fun freeride board that the women’s world could use.

Powder:  It has a slashy quick feel in powder. And when centered wouldn’t be too bad switch if you like mixing it up here and there. It’s pretty easy to turn in the trees. And it is able to straight line chutes and make surfy slashes in steep wide open terrain. We are surprised that it only has a -10 mm set back but that is a setback on sidecut.  When looking to how the stance is set on the board you can see the set back on board. It is more in line with most directional boards.

Turn Initiation and Carving: The Yes Hel Yes has a lot of camber going on between the feet to a little past the bindings. This makes for a fun snappy ride edge to edge.  It’s not going to be easy on you if you skid your turns. But if you know how to carve you might love this board. It has the underbite on the side cut to give you added edge hold when carving as well.

Speed: This is a bomber board with almost man’s board type of speed. It’s a little more playful and less damp than the Women’s Jones Flagship. But it’s also more friendly in uneven snow. It really bombs and the base glides just as well as it used to.

Uneven Terrain: The Hel Yes is a stiffer aggressive board but the flex does allow for someone who has to deal or likes to deal with bumps. Or deals with end of the day crowded groomers with emerging moguls.

Edge Hold: The Hel Yes has great hold in ice. The underbite on the sidecut does a good job of keeping your edge connected to the snow without feeling like it’s grabbing at the ice. It feels great in thicker snow and does not grab like aggressive Magnetraction.  So great for most conditions you want to ride and even some you don’t.

Flex: The flex has changes slightly over the years, it has softened up a bit from the ealier models. It’s still no butter board but it’s a little easier to lean back on the tail on a powder day.

Switch: This directional board isn’t bad switch when it’s centered up and you would think it would be a lot worse but it isn’t. You feel it a little but it isn’t that much different from riding normal.

Jibbing: Not an ideal board for jibbing, I tried it and it was a lot of board for me on boxes and rails.

Pipe:  I really enjoyed this board in the pipe. With the great edge hold on the icy wall, and the stability when you are cruising up and landing it makes for a confident ride, although I would have preferred a smaller size, it still was a lot of fun in the pipe.

Jumps:  Super fun launching off a natural feature and it can spin a bit.  It’s not terrible landing switch either.  As far as the park it’s not a top choice but it’s very doable.

If you enjoy plowing through the deep and riding fast and hard down steep terrain, you will adore the YES Hel Yes. This directional twin board with a semi-stiff flex will let you go explore off-piste with confidence or take on a sea of moguls. If speed is what you seek, the sintered base paired with the directional CamRock profile will allow you to ride
aggressively fast without sacrificing stability.

The Hel Yes will provide a great day of riding, no matter what the conditions may be. The Underbite allows for amazing edge hold. This edge technology allows you to stay locked in on turns even in icy or hard pack conditions. On this board I was able to make pretty quick turns in really icy areas without washing out. The Underbite also allows for a
catch free ride in softer snow unlike other edge technologies.

When the snow starts to fall and conditions get deep, set your bindings way back in the YES Slambacks and you will be able to plow your nose through seemingly anything.

The Hel Yes is easy to maneuver and very responsive, making it a good board to venture into the trees with.

The core of this board is a combination of Poplar, Paulownia, and Bamboo, making it lively and giving it a ton of snap for ollies. For a directional board the Hel Yes rides great switch, opening up many possibilities for play in the park. The stiffness of this board makes it hard to butter, but it is that same stiffness that provides this boards unwavering
stability.

The CamRock profile is a nice balanced blend of camber and rocker. The Hel Yes has enough camber to let you feel locked in while carving but not so much that it feels overly aggressive. The rocker on the nose and tail gives the board a more playful feel and will allow it to drift on top of powder with ease.

I rode this board goofy even though I ride regular, and although it was a weird experience, the board still ripped. This board has a playfully edgy attitude and inspired me to make big turns and to ride faster than I normally would. This board wants to go fast, and encourages you to do so. I would love to ride this board on a powder day and have the opportunity to seek out untracked areas and tight trees. This board is pretty user friendly and didn’t have much of a learning curve like other aggressive boards I have ridden.

The Hel Yes is a top performer on or off-piste. It is great for floating through powder, charging through trees, or even hiking out into the unknown exploring backcountry terrain. On groomed runs it provides a smooth and fast ride, even when things get choppy. This board is designed for the fast rider. It can cruise at slower speeds as well without feeling catchy, but this board shines when it is being ridden fast. The Hel Yes is a great board for the intermediate to advanced rider, especially one looking to take their riding to the next level.

We try to get as many images of the YES Hel Yes, but forgive us if they're not all there.