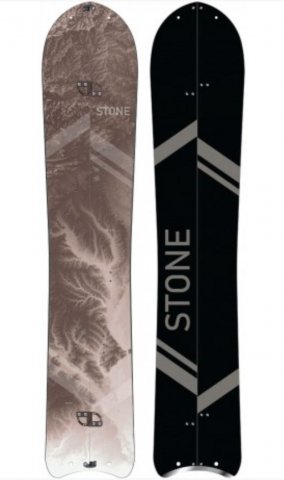 The Stone Topo Splitboard in a 150 is a unisex splitboard that has a fun freeride personality and excels at powder riding as well. Also featured in this review are the Stony Skins.

The 150 is small enough for a lot of women, but I would love to see this in one smaller size option. It is still a lot of board for lighter riders. But would be good for a rider with a bigger boot size, or that weighs more than I do.

On Snow Feel: The Topo Splitboard has a set back camber profile. The camber is a bit mellow, and the nose has a drawn out rocker. There doesn’t seem to be any rocker in the tail. If there is it is very subtle. So the tail kept a consistent connection to the snow, while the nose floated above softer snow. The camber didn’t feel too locked in. It was surprisingly maneuverable and nimble for being out of my size range and way wider than what I normally ride too. In harder snow it sometimes tracked on its own off the tail, mostly when the terrain mellowed out. In steeper hard snow I didn’t feel this at all.

Powder: The Topo has a freeride/powder profile. I got to test it in some hot spring like pow, deep enough to feel like I was floating still, but not soft enough where I was going to sink if I stopped moving. The board comes with a set back camber that helps with directional float, but keeps a nice controlled feeling when riding. The nose has rocker in it and stays above the soft snow with minimal effort. The Topo felt very easy to turn in the softer snow, and I didn’t really notice the length at all. I felt I could turn it around trees and through tighter spots pretty easily. It also is tapered, and has a good amount of set back to help with floating as well.

Turn Initiation: I was very surprised at how the Topo turned on hard pack for me, as well as in steeps. I didn’t expect a 150 to handle as well as it did for someone my size (my normal “big board” size is a 147). I really enjoyed turning it on steeps. It held a nice edge and didn’t take a lot of effort to get the board around in small radius turns. It felt great as long as I kept my speed up, but when the terrain mellowed out and I slowed down I was able to feel like I was riding a board that was just a little too big for my specs.

Carving: The Topo defiantly enjoys carving around. The wide waist width and stiffer flex allow for a nice stable carve turn. The set back camber makes it fun to carve off the back foot.

Speed: This Splitboard comes with a 7200 sintered base that keeps a nice glide along the snow. It also has a pretty damp feel when riding fast over bumpy snow.

Uneven Terrain: I rode the Topo Splitboard in some chunky, wind effected snow. It handled well. I was able to ride over it without too much chatter or bumping around.

Edge Hold: This board can hold a decent edge in hard pack snow and scraped off, icy conditions. It felt good in crappy snow on steep terrain which is awesome. There is no sidecut disruption. But the positive camber helps you stay connected when both riding and skinning up the hill.

Flex: It comes with a 7/10 flex. I was expecting it to feel stiffer when riding it, but it felt quite nimble for being a bigger board for me.

Switch: The Topo Splitboard can be ridden switch if needed. The tail allows for switch riding. It feels somewhat backwards though.

Jumps: I took the Topo off some mini natural jumps/drops that I found on my way down when hiking. It was stable on the landing, and allowed for landing in deeper snow as well.

Skins: The Topo comes with a hole in the tip and tail to attach skins from Stone. It makes attaching and removing the skins quite fast and simple. You can also purchase custom fit skins from Stone Snowboards that come custom cut to fit perfectly to the Topo splitboard, or any other splitboard purchased from Stone.

Overall: The Stone Topo Splitboard is a fun freeride board that you can use to earn some turns! It likes to make big open turns, ride the steeps, and float in powder. It is a fun ride that isn’t too serious.

We try to get as many images of the Stone Topo Womens Splitboard, but forgive us if they're not all there.