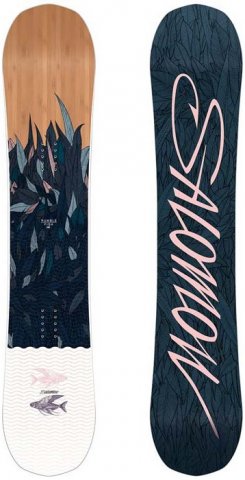 The Salomon Rumble Fish snowboard proved to be a really fun and interesting take on an all mountain freestyle board. It is a true twin with Salomon’s rock out camber profile (flat between the feet to camber underfoot to rocker on the tip and tail). It has a medium flex that gives it enough stability for all mountain but just enough versatility for playing in the park as well.

The Rumble Fish is a good board for those who want to ride centered always, even in powder. There is almost no room for set back on board so just keep that in mind if you are more of a directional powder rider.

Conditions: All conditions, we both own this board so get quite a few days on it.

Flex/Buttering: Its medium difficult to butter/flex. But that just means you get to have more pop off of jumps and into turns and such.

On Snow Feel: The Rumble Fish has a very stable feel on snow. The flat camber between the feet helps you to feel stable and confident but you also have the camber under the bindings to keep the board feeling lively. It has a semi-locked in feel when riding flat based or turning. It prefers to ride at medium to higher speeds and gets a little slower to turn at slow speeds.

Edge Hold: Salomon’s EQ side-cut makes edge hold on ice stress-free. It still has the feel of a normal side-cut but you get the extra help from the three straight lines that are incorporated into the side-cut without really noticing they are there.

Turn Initiation: The camber underfoot helps make the board responsive in turns. It turns quicker at higher speeds, and medium fast at slower speeds.

Turning Experience: Very fun in small, medium, and large radius turns, but can feel aggressive sometimes in harder snow conditions. It mostly feels medium fast to turn. There are times at slower speeds where the board starts to track on its own. It preforms best when ridden faster. It has enough camber for higher edge turning but can also skid turns.

Carving: Making carves is fun. It’s not the elbow dragging type carving board but you can definitely lay some trenches if you want.

Speed:  It’s a fast board with a sintered base that can hold it’s line when you decide to charge. and it isn’t super chattery like some freestyle specific decks can be.

Uneven Terrain: The Rumble Fish feels pretty good in uneven snow. It can charge through crud and over smaller bumpy snow. In bumps that require quick turning you have to be on top of it and tell it what to do. If you don’t, it can get away from you.

Powder: For a true twin, this board rode great in powder. I think the mix of medium flex and the reverse camber in the tip and tail kept it afloat rather easy for a shorter board. It doesn’t have much room for setting it back, so this board is more for the rider that likes to stay centered all the time even in powder.

Jumps: Really fun to jump around on, and stable enough for bigger kickers too. It has carbon stringers to add more pop to the board for added liveliness. Spins are fun on this board if you already know how to spin. It is really stable in landings. But it can be a little mean for first time park riders. The Rumble Fish is great for jumps. But a little hard for learning jumps since it has this more aggressive feel to it sometimes.

Jibbing: I like this board profile for jibbing. The flat between the feet help it to feel stable on boxes, and the camber underfoot should help you lock into rails. It also has plenty of pop and is easy to spin for more technical tricks too. But also isn’t very forgiving at the same time.

Pipe: Rides great in the pipe. The added edge hold from the EQ side-cut along with the camber underfoot make for a stable and fun pipe board.

Overall: This board has a couple different personalities. It’s a true twin so it gives the impression that it wants to play. But sometimes feels like it takes things too seriously. The Rumble Fish rides powder great for being a twin board and has a very damp feel that can take you all over the mountain. I think this board would be ideal for high intermediate to advanced riders who like to ride switch a lot and like to send it in the park as well.

The Salomon Rumble Fish is an all-mountain twin board with a bit of an attitude. It can take you all over the mountain, from powder to park, without needing to change your stance.

This board boasts a sintered base and loves to go fast, excelling at medium to high speeds. The turn initiation on this board is quick but can sometimes feel catchy when making slower turns.

For a twin, the Rumble Fish digs its edge into the snow and can allow you to make some serious carved turns. This aggressiveness and stability is attributed to the carbon fork and carbon stringers within the boards tip and tail.

The EQ side-cut adds another level of stability to this board. With three straight lines, this technology has the feel of a normal side-cut. But allows you to hold an edge in icy/hard pack conditions.

The medium flex of the board and the ghost green core allow the Rumble Fish to be super snappy and create some serious pop. In turn, this also causes the board to be a bit more difficult to butter.

The Rumble Fish encourages you to ride fast and commit to your lines. It is more forgiving in powder, but becomes extra aggressive when riding in harder snow conditions. Sometimes the Rumble Fish will take you where it wants to go unless you tell it otherwise, so this board is best for a solid intermediate to advanced rider.

We try to get as many images of the Salomon Rumble Fish, but forgive us if they're not all there.