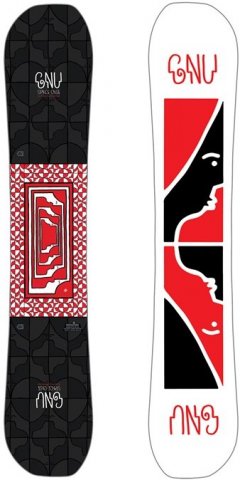 The 2017-2019 Gnu Space Case has been upgraded to XC2 BTX and it took a board we already like and improved upon it. The extra camber is a nice improvement in the overall ride that increases pop and stability underfoot. It hasn’t changed much since it went from C2 to C2X/XC2 but we wanted to compare this to the Riders Choice.

Flex: It’s got a medium-ish flex at the start but like all Mervin boards it goes to medium soft after 10-15 days on the hill.  On snow, it does not feel medium though and it’s easy to butter.

On Snow Feel: The Gnu Space Case XC2 BTX/ extra camber profile makes the ride a little more stable underfoot than the older EC2 BTX.  It still feels pretty much like a hybrid rocker board in really hard snow but more like hybrid camber in softer snow.  So overall there is better tracking when flat basing or one footing and it feels a little more dynamic underfoot.

Edge Hold: The Space Case has always had edge hold that’s just right for people who ride a lot.  If you ride in hard to icy snow the Riders Choice is the call because it has more magnetraction but the Space Case is the kind of mellow mag that we really appreciate in everything but icy snow.  It doesn’t grab like magnetraction in soft snow so that’s a real bonus.

Turn Initiation:  It’s pretty easy edge to edge and it goes where you want it to go. It’s a fun board to turn and we like how it turns better with XC2 BTX.  It’s not anything really amazing but just a better slightly more springy pop from edge to edge.

Skidded Turns: Even though there is more camber it’s still easy to skid out if you get off your game and its still a ride that is very forgiving for intermediate riders. It’s nothing like C3 which is pretty much camber when it comes to how it catches.

Carving: Definitely better and it’s still not C3 but a big improvement over the older EC2 Model. It’s the kind of board that you can have a lot of fun carving with on your way to the park or when you feel like riding the mountain.  It’s gone from being an average carver to being a good carver.  I personally still like the XC2 BTX TRS a little better but it still lays into a carve pretty well. You don’t have to squat and get your knees out over the camber in a monkey stance to really keep the tip/tail from washing out as you do with a lot of hybrid rocker rides.  You can keep your knees a little closer together with the XC2 Space case now.

Speed: It’s got decent mountain speed and we all felt it’s not a bad mountain freestyle board even though it’s a bit better in the park.

Uneven Terrain:  Gnu boards don’t have that rubbery damp feel like some boards do and you can feel the wood in the ride but it’s not a bad board for messy resort snow. You can for sure ride all day with this board.

Powder: The Gnu Space Case XC2 is an asymmetrical twin so that means it’s best to keep it centered and ducked out at all times but if you like to ride switch in powder and really take a freestyle approach to the deep stuff this can work.  There isn’t too much difference between EC2 and XC2 because the tip/tail are still lifted off the snow but the EC2 does have an advantage there.  If you like to set it back and surf then you can get the Zoid for powder and have a similar ride to the Space Case.

Switch: Perfect either way.  The Asym tech actually makes it more symmetrical for a duck stance if that makes any sense. What I’m trying to say is it matches each side of your foot position perfectly.  It improves turn initiation across the board but we found it makes you a stronger switch rider when set up centered and perfectly duck.

Jibbing: Pretty easy jibber and we all felt that when the board softens up a little the Gnu Space Case XC2 will be fun here.

Pipe: I could lap the pipe all day with the Space Case and the XC2 BTX will help with a little more drive from wall to wall.  There often seems to be a correlation with carving and pipe so if a board can carve well it usually means it will ride the pipe well.  It carves better now so it should ride the pipe better too.

Jumps: Love the extra pop off the tip/tail from the augmented camber and it’s a better jump board than it used to be.  It really excels with jumps that most people hit.  If you are going really big you might want a little more board underfoot.

So last year when I was riding the Gnu EC2 Space Case and the Never Summer Funslinger I found that Funslingers extra camber made the Space Case seem a little dated but now that it’s been upgraded to a camber profile similar to the Funslinger the Gnu Space Case stayed relevant for 2017 and makes it still a very recommendable board.

The Gnu Space Case is a really obscure but also really fun board in Gnu’s line.  Its very much it’s own board but has a lot of similarities to it’s much more expensive older brother the Impossible.  It has the same stable between the feet EC2 PTX ride and a very similar ASS tech shape that makes the board very similar to the Impossible but feels a little more mellow and comes in smaller sizes.  This is one of our personal favorites but it’s not going to fit a wide scope of riders due to the limited sizing that’s best with size 10 and below. The 2014, 2015 and 2016 Gnu Space Case model didn’t change much.

So the Gnu Space Case is another board from Mervin that does more than just act like a somewhat smaller freestyle board. It has a mountain personality as well as a park personality.  If you ride duck or very close to duck like I did with this board it could be a great fit.

On Snow Feel: This is a pretty balanced all mountain freestyle ride that’s fun in and out of the park.  It’s EC2 PTX is not like the Attack Banana’s EC2 because it’s much less loose between the feet. It’s EC2 PTX shape offers a feel just a little bit shy of flat to rocker or even some hybrid camber rides. The rocker between the feet is mellow and the camber at the tip and tail are pretty close to the snow so it makes it feel pretty close to stable compared to many other hybrid rocker boards. It flat bases and one foots much better than most C2 shapes and reminds us of a softer version of the Impossible Series. The ride is stable between the feet in most conditions and only is a little bit loose in hard to icy conditions.

Powder:  This seems like it would be on the bottom side of good or even the top side of average. This is a very similar shape to the Impossible series which does very well in powder for a twin.  It just comes in a smaller size range than the Impossible Series.

Turn Initiation and Carving: The Gnu Forest Bailey Space Case is easy to turn for those who skid their turns and pretty fun for those who know how to turn correctly. The waist width is a little more narrow than the Impossible Series and you can feel that when it comes to easy turn initiation. Short radius, wide radius and even carving turns are all more than competent.  Laying into a hard carve is pretty fun because the camber at the end is pretty close to the snow and seems to engage pretty easy.

Speed: This is kind of a park board but I had no problem picking up moderate speeds on the mountain.  It accelerates nicely and has a decent base that keeps it’s speed but it’s not going to blow your mind.  It won’t disappoint either. It has everything you need in the park and feels very predictable.  It’s pretty damp for a board of this type as well.  As the board softens up as it breaks in it will become a little more chattery but isn’t bad at all for a board of this type.

Uneven Terrain: Not bad with bumpy end of the day snow and it’s thick build shelters you from bumps you hit under the snow pretty well.

Edge Hold: Now this is another MTX side cut that lives on the more mellow side which most will appreciate if you ride in softer conditions. When it gets hard it will still hold well but its not an ice specialist. It doesn’t have an overly grippy feel to it in hard conditions.

Flex: Feels like a medium flex but after it breaks in it will get a little more soft and playful.  The board can butter/press rather well but doesn’t feel like a noodle.

Switch: These Asymmetrical side cut boards ride switch incredibly well and most people I ride with feel that this design is better than even a true twin. If you have a duck stance the heel side side cut will respond better than a normal side cut because it’s designed for it.

Jibbing– It feels a little stiff at first but after a week or 2 on it the Space Case breaks in and makes for a more fun jibber.

Pipe: The Space Case doesn’t have the grip like the TRS in the pipe but it’s pretty fun there still.  It’s easy and forgiving around the coping but also drives from wall to wall pretty well.

Jumps: So the Space case felt nice and snappy when it came to an ollie and it was very easy to hit kickers with. There is some sacrifice in pop to have a little more of a stable ride but I personally liked it compared to it’s EC2 BTX relative the Attack Banana. The Attack Banana will spring better on an ollie but it’s going to feel very loose between the feet at higher speeds. The Space Case is going to give you a stable ride that can still ollie very well if you need to.

All in all the Space Case is a fun, playful, and stable park board that can also act like a small all mountain freestyle board as well.  I wish I had come across this board sooner as it’s pretty fun.  I’m going to try to re-unite with this one.

We try to get as many images of the Gnu Space Case, but forgive us if they're not all there.