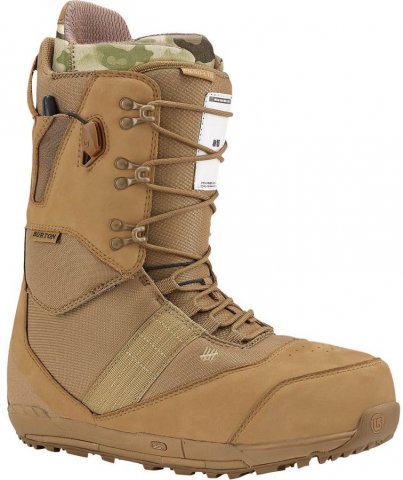 The Burton Fiend LTD is like the Burton Fiend in some ways but in many other ways, it’s different.  It’s a boot I ride and it works well for people that like to spend equal time in the park and mountain. I personally like this better than the Favorite Burton Ambush but I’m in the minority of our crew because most aren’t into traditional lace these days. For me, it’s worth the tiny bit extra time for this fit and feel.

The 2016 Burton Fiend LTD has these differences:

Here are the key differences between the Fiend LTD and Fiend.

1. It has a speed lace set up for just around the ankle to help lock in your ankle. This will help address issues that those with smaller ankles/heels have with Burton boots and it works well.  There is a very noticeable difference between the Fiend LTD and the Fiend.

2. It has Burton’s Auto-Cant Tech which allows you to alleviate stress on joints without having the angular feel that canted bindings have.

3.  It has an EST optimized sole that has better feel underfoot but less shock absorption than the regular Fiend.

Approximate Weight: 2 lbs per size 9 boot and 4 lbs for the pair.

Fit: The Fiend LTD fit’s true to size.  My size 9-foot fit’s the size 9 boot.  It’s also not super tight width wise around the front of your foot so there is room for it to expand wider as you flex forward.  This feels good and I think because of this little bit extra width in the front for my feet to expand I’ve never gone numb with these boots. Also, the fit of these boots conforms to your foot better than the regular Fiend.  It’s feeling much more an extension of your foot compared to the normal bulky feel you have with most snowboard boots.

Flex: Same flex as the Regular Fiend that is right there in the middle.

Response: Same balanced but smooth response edge to edge as the regular Fiend that’s comfortable in and out of the park.

Comfort: Both models are comfortable right out of the box for me. I really like the feel of the est boot under the foot.  It really conforms to your foot and it rocks back and forth easier than the standard Fiend.  However, it doesn’t have the shock absorption that the regular Fiend has so it’s more about your personal preference of feel vs shock absorption.

Heel Hold: With the added speed lace for just around the ankle there is better heel hold that’s more in line with focus boa boots. It also doesn’t have that over crank foot numbing feel that BOA’s can cause.  So if you have had heel lift problems with Burton boots in the past but liked everything else about them then these are a really solid choice.  I think if Burton had made this a speed lace with the extra speed lace in the ankle it would have been one of the most desired boots in their line.

Adjustability: Not quite the adjustability that most Burton boots have.  It’s not that easy to tie a knot to separate the upper and lower any more with the fixed lacing on the bottom of the top rungs. If you want separation knots it’s now something that starts a bit above the ankle.  On the plus side, it’s easier to lace up though.

Flex Retention: This fully articulating cuff retains it’s flex really well but the liner and spine do break down over time.  You still get a good 100 days out of them and they don’t ever go all noodle on you.

Shock Absorption:  It’s missing the shock absorption that the regular Fiend has but you get an auto cant which relieves stress on your joints from the wide angle stance you have for snowboarding.  It’s not like a canted binding.  It’s a normal sole when standing straight up and down and when hiking.  Instead, it just rolls to the inside easier than a normal boot would. There is also less tread than the regular fiend that doesn’t last as long but it also allows you to feel the shock absorbent material work a little easier at slower speeds and with a smaller impact. If I could just take the extra shock absorption of the Fiend and add it to the Fiend LTD this would be a perfect fit.

Traction: Burton hasn’t abandoned the rubber sole concept and we thank them for it. It’s just about as good as the regular Fiends’ Vibram sole. Many companies these days are going with a single mold EVA foam sole that has less traction and wears down fast.

Footprint: The most reduced in the industry and on top of that there is a nice curve up in the heel/toe that further eliminate the possibility of heel/toe drag.

So, all in all, you have a really solid boot that combines the heel hold of BOA boots and the versatility of traditional lace. I think it would be really cool to see a triple speed lace version of this as this little 2 lace ankle speed lace in the middle really changes up the heel hold as well as the fit. My only complaint is the minimal shock absorption that the EST Optimized Mid Sole provides. Still, I own them and I’m using these as my primary boots. It’s not as sexy as BOA or Speed Lace but it sure is one solid fun riding boot.

We try to get as many images of the Burton Fiend LTD, but forgive us if they're not all there.

Giving these a couple stars back, as the foot pain went away after 40 days or so. The liner is pretty stiff and takes forever to break in. The upside is that it lasted me over 2 seasons of over 150 days totaI. The footprint is reduced but the boot in big around throught the ankle and toe, so much so that my same size Nike Vapen's had to be adjusted smaller to fit into my Burton Cartel's and Malivita's.

At abut 50 days of torture on my feet, these finally feel great! They are holding up quite well at about 60 days. I now give it 4 stars do to the uncomfortable out of box feel.

These were comfy for about 15 days, after that they developed a weird pressure point in the left boot only. It's localized in the lateral side of my forefoot, and no matter of adjustments are working. FML, $$$ down the drain. The pain after riding these in my left foot is unbearable now. I switched back to my 32 JP Walker. They do hold their stiffness, but unfortunately for me, they do not work. In the shop they felt like a dream.

product 0.3
2.7 4.0 3 3 Giving these a couple stars back, as the foot pain went away after 40 days or so. The liner is pretty stiff and takes forever to break in. The upside is that it lasted me over 2 Burton Fiend LTD Review And Buying Advice