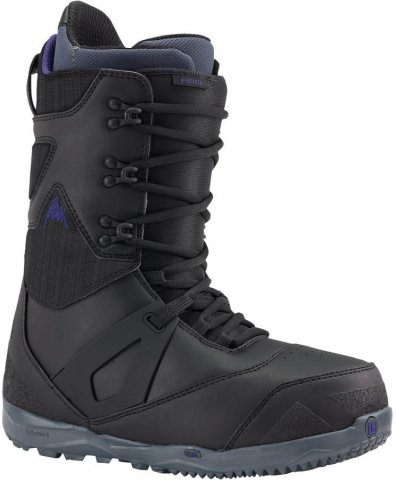 The Burton Fiend is pretty much a somewhat upgraded Burton Hail which isn’t a bad thing.  Traditional lace isn’t that sexy these days but this is still a boot that is really fun to ride and also a boot that I like to have in my quiver.  It’s a fun shock absorbent boot that is great for park rides but also has more than enough flex to make some good turns on the mountain. In other words, it covers a wide variety of boards.

The 2016 Burton Fiend has a few changes to the overall design.

Despite the cost-cutting measures for 2016, it’s still a good boot.  I’d just like to see them bring back the Vibram insole and the stronger rad pads.

The Hail is discontinued but most of the design now lives on in the Fiend.  Here is what is new with the Fiend.

1.  The sole is new and looks like the sole from the Burton Imperial but its taller and has a lot more shock absorption. It feels about the same as the Hail but with unnecessary parts removed to save a little weight.

2.   The Hail use to have 3 lacing rungs on the upper but now there is a more streamlined/easy fixed loop at the bottom and the same 2 rungs as before with the hail on the top.  It’s easier to lace up but it’s not as easy to adjust the lower and upper separately now.

3.  It doesn’t have the auto cant thing going on that the old Hail has.  It’s got a little bit of a natural lean/inward roll to match the stance angle the average rider has but it’s not like the easy to roll in Auto-Cant that the Fiend LTD and Hail have.

Fit: The size 9 boot fit’s my size 9 feet perfectly.  The toe box is also a little wider than some.  It’s not ideal for wide feet but it does allow a little room for your front foot to expand widthwise on a forward lean.

Flex:  The fiend has the same middle ground flex as the Hail that is soft enough for the park and some tweak-ability but also stiff enough rail a good turn on the mountain.

Response:  Nice smooth but not lazy response edge to edge. It’s a fun boot to have on a mountain board for making good turns.

Comfort:   Look every foot is different but I find this has almost the same level of comfort that hight end boots like the Burton SLX have.  Most companies take a few days to break in but Burton is one of the few that work for my feet right out of the box.  If this boot is right for your foot it’s really right.

Heel Hold:  Now Burton isn’t the best when it comes to heel hold but I’ve never had a problem with it. For some who have heel hold paranoia or narrow heels, you might want to get j-bars or other boot fitting equipment.  If you are really paranoid then you want to look for focus boa boots somewhere else.

Adjustability:  Not quite the adjustability as the Hail because the bottom rung is fixed instead of easily removed.  So if you like tying a knot in the middle to separate the upper a lower you have to now tie it one rung higher and get a little of your upper.  That being said I found that the boot fit really well around my foot and I didn’t need to tweak it too much.

Flex Retention:  This articulating cuff makes for a pretty long lasting boot. It doesn’t have the infinite ride liner like the higher end boots that don’t break down but it holds up for 100 days of riding without becoming a noodle or falling apart if you aren’t rough on your boots.

Shock Absorption:  One of the most shock absorbent boots in Burton’s line and up to the top in the industry. It looks like the Imperial’s sole but it’s got a lot more shock absorption.

Traction:  Vibram outsoles are amazing when it comes to traction in all elements.  You are fine with these boots in icy parking lots or walking across rocks at the top of a peak.

Footprint: Very very reduced.  Burton has shrunk down so much that in some instances it’s a full size smaller than some boots from other companies that haven’t decided to do the reduced footprint thing.  On top of that, the toe and heel part of the sole is turned up so it’s the best when it comes to eliminating toe/heel drag.

On & Off Ease: The new fixed lacing rung on the bottom makes it easier to tighten up quicker and loosen up quicker but it’s still traditional lace and it’s not super fast.  That being said it’s not as slow as you would think either. I don’t find myself slowing down the group in the morning when I choose to put these boots instead of speed lace or BOA.

So, all in all, it’s not as sexy as speed lace or BOA but it really satisfies my needs and traditional lace isn’t as bad as people who have only owned BOA or Speed lace think it is.

I’d actually like to see the Burton Fiend and Fiend LTD combined into one boot. I’d like to see the Fiend keep its shock absorption but take on the Auto-Cant and ankle speed lace from the Fiend LTD.   Even cooler would be a triple zone speed lace that takes lower, ankle and upper.   That being said it’s a very good very shock absorbent boot.  I find it one that I love to have in my quiver and I ride it often.

We try to get as many images of the Burton Fiend, but forgive us if they're not all there.

Study build. Well constructed. Retains flex after 33+ days on the snow. I have flat feet and the boot pressed quite hard on the sides of my feet initially, but this wore off after about 10 days on the snow as it packed out a bit. Stylish and comfortable enough to be worn as apres boots. Decent traction on snow but slippery on ice. Truly reduced foot print - fits my 27.5cm long feet well.

product 0.3
4.0 4.0 1 1 Study build. Well constructed. Retains flex after 33+ days on the snow. I have flat feet and the boot pressed quite hard on the sides of my feet initially, but this wore off after Burton Fiend 2016-2015 Snowboard Boot Review