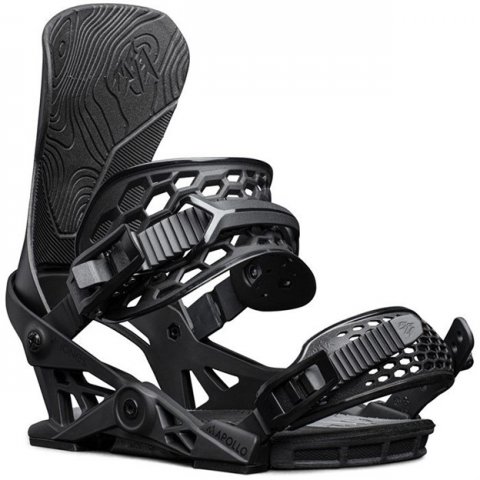 The Jones Apollo doesn’t have much adjustability or works well with softer sole boots but it has a very damp, shock absorbent uniquely smooth ride. 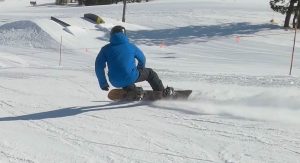 Size Medium- 2.0 Lbs with Screws on which is on the lighter side of medium.

Very stiff. Not much twist or give with the Jones Apollo.

Almost none. with the Jones Apollo.  All you have is strap and forward lean adjustability. So if you are on the border between sizes you can’t do much to center the boot in the binding. You can slide the binding from edge to edge to center your boot on the board but not over the gas pedal on the binding.

Not much happening here with the Jones Apollo either. The Disc is mainly for sliding edge to edge and not tip to tail. There isn’t a long channel either for sliding much tip to tail either.

The toe strap had issues keeping hold with our boots but the Jones Apollo’s ankle strap has great support and its very comfortable.

What isn’t uncomfortable is how the sway bar under the Jones Apollo has no plastic protection like all other bindings out there. So if you have a softer soled boot then you won’t be able to

Pretty smooth and worked great without any catching on and off.

So the Jones Apollo has a very smooth but not super quick response to it. It doesn’t initiate a turn as quickly as you would think for its flex. However it is so damp that it helps boards hold their edge better in the snow to power hard through turns. Especially at high speed turns.

Not much flex underfoot. The Jones Apollo makes the board feel more damp underfoot. So if you are into buttering this isn’t the binding for you. Even with the softer bushings. If you want a smooth damp ride this could be the bindings for you.

This is what makes the Jones Apollo shine. The rubber bushings make this damp and the EVA foam makes it shock absorbent and cushy. Even though it is stiffer foam than most Jones/NOW bindings it still is cushy and shock absorbent in almost any kind of uneven snow you will come across.