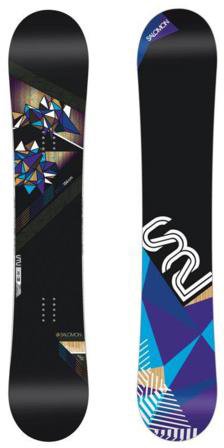 The Salomon Special II and Special must be French for high speed & great edge hold because this has an uncommonly fast ride about it. The Special is magic at high speed on hardpack or morning groomers! As of 2010 and 2011 Salomon made some major changes.  The rubber in the rails really changed the way it rides.  Before it was very stiff and damp.  Now it’s much softer but just as damp.  It took the special from an aggressive all mountain snowboard to a softer/forgiving but just as aggressive all mountain snowboard.

Out of all of the bindings, we tried the Union Force and Force SL’s were our favorite with the Special.  The Union Bindings Made the Special turn easier.

The Salomon Special is a very niche board and not for everyone but if you are looking for a fast directional twin here it is.  We would say The Salomon Special and the Rome Design are the 2 best all mountain freeride cambered directional twins.  The Special has the best edge hold and is faster.   It has lots of pop and is a stiff, stable directional twin….especially for its sizing.   This is something you don’t see much of in the directional twin category.  Our only complaint was that Specials from the 08-09 season and below is it seems to get short bus angry at you if you aren’t going fast or going big. If you do what it wants and ride it in good conditions at medium to high speed it will be very good to you.  If you ride in chewed up rutted conditions it can act like Warren if you take off his ear muffs. If you haven’t seen Something about Mary then never mind.  The 09-10 Model has softened up and added some new tech.  This has eliminated our poor conditions and low-speed complaint while still maintaining that stable at any speed feel.  We liked the old model’s 3-D core on the top because it makes the board very unique but the changes of 09-10 have transformed this to an all conditions board.  This took the Special from a niche board to a serious all mountain and all condition contender.  It is now something perfect for all mountain riding.  The only issue we feel they have to address now is it’s less than average performance in powder.

Groomers- The Salomon Special performs well on almost any type of groomed run. Post powder packed runs over corduroy are of course perfect and the board really shows its stability making any kind of turn at high speed. The special keeps its edge in Hard pack and firm conditions. Ice just sucks for any board but it will do better than most because of its quadratic sidecut, cambered shape, and stiffness. At the end of the day when the groomers are all chewed up Warren comes out again and this board seems to act like some boards that can’t handle the high speed at low speed. We call it reverse chatter and that might be this boards only weakness.  The 2010 model is softer than past models and is much more forgiving in crappy conditions so well done!  It’s worth paying the $40 extra this year to have the newer tech.

Powder: The Special II does well to make a twinish cambered shape the best it can be in powder but it’s just not that great.  It has a 20mm setback so it does have some room to set your stance back for the deeper days but this isn’t going to blow you away. The nose & tail also turns up rather high to help you stay above most moderate pow days. It’s not going to relieve any leg burn through or even come close to competing with a pow specific or reverse camber board. In an emerging time of reverse camber and effortless powder float, you will not be that impressed with its powder performance.

Speed: The Special II is fast….really fast. It’s also incredibly stable.  The only boards that are faster are the big freeride boards like the A-Frame and Burner.  The tough fast base, good edge hold, and stiffness make for a dependable chatter freeboard at high speed. It runs really well in the flats and gets you through traverses easier than many other boards out there. This board shines in the morning on a steep flat, well-groomed run. It’s so stable you don’t realize how fast you are going if you are by yourself.  Some of our best groomer days were on this board.  Even though this board softened up it still is just as damp as past years models.

Approximate Weight- Salomon makes a pretty light board and the Special II is pretty light. If you compare it to most boards you will see that the rails are much thinner. However, they didn’t skimp on a sturdy top sheet or base so it will last you a long time. It’s actually on the upper end of lightweight.  All in all it’s a good balance of weight and should last a long time.

Turn Initiation- It won’t let you down in a tight spot and has improved tremendously with the introduction of the Special II.  If you like a board that takes a little bit of lean to turn then this is perfect.  It’s not too much to make you weary in tight areas but enough to be incredibly fun on an uncrowded morning when you can make any kind of turn you want. When you are in the crud or 2-day old powder this board grabs and can make turning difficult but it’s not terrible.  The only time this board is not fun is at the end of a crowded day when the runs are all chewed up. At this point, it brings out every imperfection in the run and is rather unforgiving.

Edge Hold: The Quadratic Side Cut isn’t revolutionary but sure does have good edge hold. Salomon keeps this board on edge when you need it. No matter what condition we ride in this board will not wash out. When you come into the steep runs that have all the good snow blown away on the top you’ll feel safe making turns to get to the good snow. Hard pack days will not be a problem.

Flex: This year Salomon took a lot of stiffness out of their boards but still kept all the other qualities it had.  If you get an older model then we say it’s Very Stiff! This board has a lot of pop but it takes allot to flex it.  This board does not chatter and hauls ass because of this. If you want a stiff board that you can really lean into turns with this should be a finalist in your decision-making process.

Switch: The directional twin shape makes this board ride very well switch. It’s not going to compare to a true twin but is a great choice for anyone who mixes it up.

Pipe: The Special climbs the pipe walls with ease. The only issue is the Special is stiff so sometimes it’s not as forgiving on tricky landings as some boards. The Special II changed this up and makes it a lot more forgiving when it’s time for re-entry.

Jibbing- The Special would not be recommendable for the jib park but the Special II is more jib friendly. This is one of the ways Salomon improved the special to make it more all mountain. Don’t ruin these precious edges on rails but if you do it’s better with the rubber and softer flex.

Jumps: The Special and Special II hits kickers well and lands them well when you are going medium or big. If you hit jumps all day there are better boards out there for that but it’s perfect if you stop in the park on the way to the chair lift for your next run or like to go really big.

All in all, we were very impressed and just couldn’t get over the speed so it became part of our quiver.  It’s not for everyone but some will absolutely fall in love with it.

We try to get as many images of the Salomon Special, but forgive us if they're not all there.