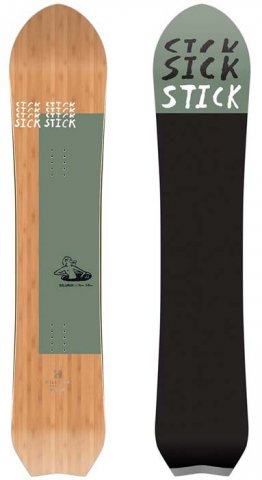 The 2018 Salomon SickStick played around with the shape but kept similar, although not the same, hybrid camber profile as 2017.  We had a great time on it and would like to spend more time on it.  We both liked the overall ride a little better than the First Call but now that it’s in production we aren’t sure if the $200 price difference is equal to the performance difference.  If we could swing it we’d go Sick Stick but if we couldn’t the First Call would be just fine.


The 2017 Salomon Sick Stick updated the board to hybrid camber this year and it really makes this stick sicker.  It’s much more dynamic as a turner and has more pop while still having a good float for its shape.

The Salomon Sick Stick is called a tapered twin which doesn’t make much sense. It’s more like a directional twin or even twin-ish board with a slight taper at the tail. The point they are trying to make is this very powder board can handle switch or regular riding very well but ever so slightly favors directional riding. It also handles groomed runs very well.

The Salomon Sick Stick is one of those powder specific boards that are for the rider who likes riding switch in pow as much as they do riding one direction.  It has pow rocker shape that makes for a good float and it also has an easy turning stable ride for those crappy paths back to the chair on a pow day. You can hit trees, cliffs, steep chutes or enjoy wide open faces.

The flat between the feet makes for a stable ride when the conditions are firmer or getting through that icy part at the top of a windy peak. Short radius and long radius turns are easy and fun but it’s not an ideal carving board due to the pow rocker.  It’s a fun board to slash.  The Sick Stick might be better served with the -20mm set back on all the boards instead of just the 166.  That way the directional powder rider can get a bit more float

The Salomon Sick Stick is not super poppy when it comes to creating your own air but it isn’t dead by any means. It still feels pretty lively and snappy in terms of response and can be a fun powder board for the right type of rider.

We try to get as many images of the Salomon SickStick, but forgive us if they're not all there.