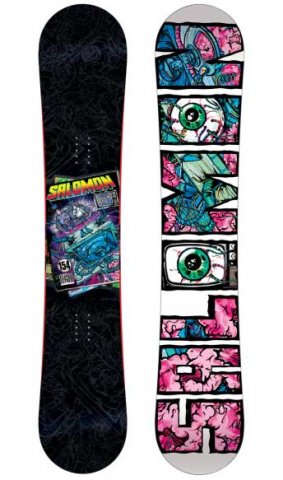 The Salomon Riot is a go anywhere do anything all conditions board at a reasonable price.

The rubber they added to the rails softened the flex a bit and made the board damper. We preferred many other hybrid shapes and models to this but for some, it could be good.

Flat camber is more prevalent these days. Some hate it and others love it. It’s very stable like camber and good at speed.

It lacks pop (we don’t care what they say in the description) when you engage in a carve.  There is a lifeless feel.

If you like laying into an aggressive carve it will do ok but something is missing towards the end of the carve. It does snap well off the tail for an Ollie.

It doesn’t have an effortless float in powder like many alternative shapes but it does plane very well when it comes to riding to camber. This is a common problem with all flat camber boards.

All in all the Riot has some strengths and weaknesses.

In 2012 not much has changed with the exception of a few minor refinements.

For 2011 the Riot got rid of the camber shape and added flat camber which really changed the ride.

In 2010 this was a camber twin that made for a pretty decent $400 freestyle ride.

We try to get as many images of the Salomon Riot, but forgive us if they're not all there.