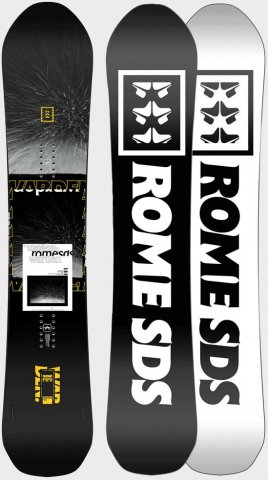 The Rome Warden was a fun board to ride and it rides much better than you would think for its price point. Its a good call for anyone on a budget that likes a turny board that can carve really hard.

Approximate Weight: Felt to me like it was on the lighter side of normal

Sizing: I would have liked the 158 a little better but the 155 for sure worked.

Flex/Buttering: The Rome Warden is doable but takes a little work. The mediumish flex off snow feels pretty similar on snow. There is lot’s of pop and it ollies well without too much work.

On Snow Feel/Ability Level/Skidded Turns: The Rome Warden is cheap but it’s far from being easy to ride. It’s not for beginners or intermediates unless they are curious about what it was like for us older farts to learn on camber. It’s not as tough as camber but these days there are many easier options out there. This is for advanced to expert riders on a budget. It has a very turny feel that is just shy of being hookey but it tracks well one footing and flat basing. There was a very consistent feel underfoot in all conditions.

Edge Hold: The Rome Warden gripped well and it held on to harder snow pretty well without having to dial back your turn a good bit.

Turning Experience/Carving: You get a lot of carving power out of such a cheap board. The mostly camber profile, deep sidecut, and Rome knowhow really tickled my taint when making a hard carving turn. Even in shitty snow, you could feel it’s capabilities and it has a lot of that magic that the Rome Blur has. It really carves well with your weight evenly placed between the feet or with more weight on the back foot. It’s the kind of board you get to carve if you are on a budget.

Powder: No powder to speak of but there is a good bit of setback on board. At almost a 22″ stance width you can get 2″ back on board (the difference between nose and tail 4″) and that isn’t bad. You need it though with all that camber and a nose that is on the smaller side surface area wise.

Speed: Pretty good speed but not amazing. It likes to spring out of a carve and pop high on an ollie more than carve.

Uneven Terrain: Weaving in and out of bumps was super easy with the Rome Warden. It can power over uneven snow well enough but I wouldn’t push it too hard though. The micro bumps were felt but they didn’t tax my joints as some boards can.

Switch: Way more doable than I thought it would be. If you cover your hands over the nose/tail when you are looking at it you can see that it’s pretty similar on the sidecut each way and I felt that riding switch on snow.

Getting Air/Park: Lots of pop on an ollie and it has the flex for big air. I just preferred the way the National and Agent tracked into a jump more. The pipe was really fun though and it was my favorite of all the Rome boards I had to test. Didn’t jib with it.

So all in all the Rome Warden has some low-cost Blur magic that we all really liked. It’s a very recommendable choice for those that want to carve and love turning as much as they can. It might not be as well rounded as some boards but will really delight the right kind of rider. Especially for this price point.

We try to get as many images of the Rome Warden, but forgive us if they're not all there.