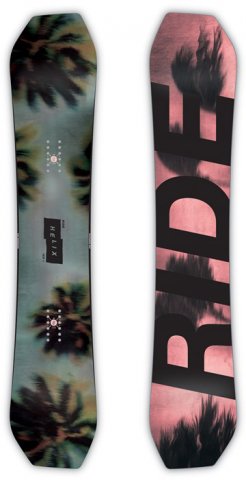 The Ride Helix seems to be the replacement for the old classic camber DH snowboard.  It feels like it’s one part Buck Up and one part new Asym.  It’s a pretty ultra damp aggressive ride. The 2019 Ride Helix has stayed pretty much the same ride spec wise but there was a little softening of the flex since we rode it.  So most of the old review still stands.

There is a growing number of Asymmetrical boards out there these days and I say the more the merrier.  Asym boards like this help the rider turn easier on their heel side and we found they help you ride switch better as well.  What I mean by better switch most of us aren’t as strong riding switch as we are regular so the asymmetrical sidecuts make it easier for us to turn when we don’t have as much game going on with the wrong foot forward.  So keep these types of boards coming Ride.

On Snow Feel:  The Ride Helix felt stable bordering on semi-catchy.  It’s got that aggressive feel like the Buck Up had but felt less aggressive than the old DH.  It’s like having forgiving camber. It’s easy to one foot off the chair and to flat base down a long cat track. It’s got that I like to turn the mountain into a high-speed park kind of ride.  It wants to go fast like all higher end Ride Twin’s I have tried.  It’s got that same Ultra Damp feel that some might call dull to it like the Machete and Buck Up but I liked it more than the Buck Up and about the same as the Machete GT.  It didn’t feel like a take me right to the park kind of board. Some say that there are tracking issues

Turn Initiation:  Nice quick turn initiation that isn’t easy but if you know how to turn it’s fun and quick. I found myself turning a lot of tight quick turns before going wider and I enjoyed all widths of turns with this board.

Turning Experience: Fun board to turn regular or switch and it’s great for riding the mountain making all kinds of turns.

Skidded Turns: Not ideal for beginners but more forgiving than Camber rides.

Carving: The Ride Helix can carve pretty well.  Especially if you want to carve either way pretty well as long as the snow is softer.

Flex: Feels medium bordering on Medium Stiff. Not quite a board that was super easy to butter and play around.  I could butter but it was a little more work than many twins I’ve tried.

Edge Hold:   Felt pretty good but not bottomless.  In the firm morning conditions, the Helix held fine enough so I’d say it’s a borderline hard snow kind of board.  It’s better in medium conditions but you can go out in hard snow and keep an edge.

Powder:   No powder but this didn’t seem like something I’d want to be out on.  I’ve ridden this type of camber profile on a few different boards from Ride and it seems like it’s a step above camber in terms of float but it’s not quite something that competes with other hybrid shapes that have more rocker going on.

Carving:  For a twin with not too much camber going on it’s got a good spring out of a carve.  The old camber DH is better but it’s right on par with the other hybrid camber boards with Ride.  It was easier of course to carve switch.

Speed:   Very fast for a twin and to me it felt more at home at higher speeds on the mountain than in the park.  Well except for those that go really big in the park. It’s not a freeride bomber but it’s very damp and fast for a twin.  It also keeps it’s speed well when on longer flat cat tracks.

Uneven Terrain:  Ride makes boards that don’t pass much feeling through so this board could handle small fields bumpy/uneven snow much better than most in its class. It’s also pretty quick in and out of rutted up snow that you have to approach at slower speeds.

Switch:  I mentioned this before but the heel side friendly sidecut makes it easier for someone to ride switch than even a true twin.  For some reason with almost any asymmetrical board, I just get into the switch rhythm faster and I feel more confident.  It just seems to be easier with the weaker foot forward.  So if you ride switch a lot then this or other good asymmetrical boards will help.

Jumps:  Most Ride boards feel rubbery and a little dull so it can be a little deceptive when it comes to an ollie.  It feels different but it pops just fine and I’d say above average. It’s also great approaching a kicker.

Jibbing:  I’m not a strong jibber and the stiffer flex didn’t make me want to go there.

Pipe:   I rode the Ride Helix on a mountain (Heavenly) without a pipe but I really wanted to take it in one.  I could just tell this would be fun.  It’s got pretty good edge hold bordering on being competent on hard snow and it’s got a nice carvy camber drive edge to edge so it would be good going from wall to wall. I think a lot of more experienced pipe riders would like this.

All in all the Ride Helix is a fun aggressive all mountain twin that I think a lot of riders could have fun on.  Especially if you are a fan of Rides riding personality you will be pretty stoked on the Helix.

We try to get as many images of the Ride Helix, but forgive us if they're not all there.