Turn Ons/Swipe Right: Great in uneven terrain, very versatile, stable forgiving ride that is good at everything but great at nothing. That’s all you can ask from a true all mountain board like this.

The Ride Algorhythm is a quick turning, poppy board that can ride centered like a mountain freestyle board on groomers and set back in powder. It’s a great board for those that want to get after it all day no matter how messy it gets. 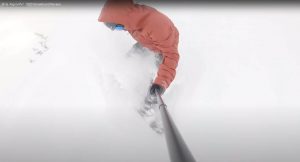 How This Review Happened:  We borrowed this for an extended demo and then returned it.
Size: 157
Days:  2
Conditions: Really good PNW snow that had nice soft groomers, some steep runs with icy patches, some bumps and some powder.
Riders: James (Size 9, 5’10” 185-195lbs)
Boots: Adidas Tactical ADV
Insoles: Sandsole Custom Insoles
Bindings:  Union Strata

Feels pretty normal weight wise and maybe a touch on the lighter side of normal.

The 157 Ride Algorhythm matched up really well with my boot size. Even though I’m over the weight recommendation I didn’t feel like I was too heavy.

The Ride Algorhythm has mellow camber between the bindings going to mellow rocker after. It’s stable one footing/flat basing and tracks well without being that catchy/locked in. It can skid turns really easy if you get off your game and just about any ability level can have fun on it. Overall it has a very consistent feel underfoot in all conditions.

The Ride Algorythm has some of that old super damp feel that the older ride boards had mixed with some of that lively poppy feel the new ones have. It felt more medium/stiff between the feet but then softer in the tip/tail. It buttered pretty easy and popped really well on an ollie.

The base had good glide to it and kept it’s speed well enough. It’s pretty damp too and can pick up some pretty good speed without much chatter.

This is a great board for all-day resort riding. It can weave around bumps well but also power over them pretty well too. Where it really shined was on groomers with that micro bumpy stuff everywhere.

There is pretty solid grip with the Ride Algorhythm and it held an edge pretty well in some hard patches I had. On one steeper run I had to keep the edge on a really hard spot and it held enough to get me through it. It wasn’t confidence-inspiring but it held. It’s not a hard snow specialist but it doesn’t let go either.

Nice fast turn initiation happening here. It really snaps quickly edge to edge and it felt great in tight spots. It doesn’t have that twitchy/hooky feel like the Ride Bezerker has.

There is enough camber to make a harder turn fun. It doesn’t light up the carving world but it has some satisfying turns while still being forgiving.

There is enough set back on board along with early rise in the nose to give the Ride Algorythm a good bit of directional float.

Very good switch and it works really well as a mountain freestyle board.

So all in all, the Ride Algorhythm does a great job in just about anything except icy snow. It has a very versatile ride for those that want a mountain freestyle board for groomers but like to set it back for easier float in powder.

We try to get as many images of the Ride Algorhythm, but forgive us if they're not all there.