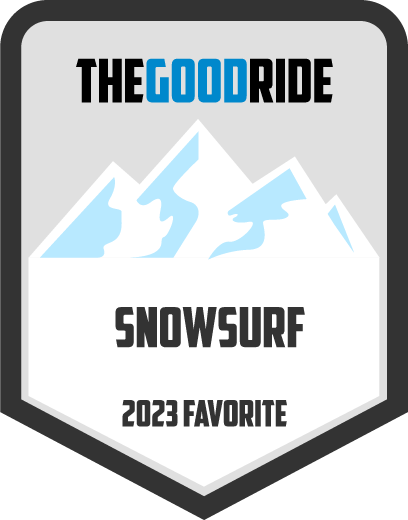 The Moss Snowstick Jellyfish, like most Moss boards, puts you soo far back on the tail that it comes closer to riding a surfboard than another ride we have ever tried. It isn’t a fast board but it is an incredible floater and a very articulate/super fun on the back foot slower speed groomer carver. You need to adapt to what this board wants and if you do, you will have a time.

Sizing: This board only comes in 156 but it felt right for Peter and my boot size (8.5 and 9). We felt like we were on the heavy side though being in the 180lb range but not so heavy it was ruining the ride. Grants size 11’s (10.5 Adidas) were a bit too much but almost doable.

Flex/Buttering: So the flex off the tail on snow is super easy that you have to dial it way back to not butter onto your ass. As you get to the camber you find a medium/stiff flex. The rest is mediumish. There is good pop but also a smooth, damp rubbery feel to it.

On Snow Feel/Ability Level/Skidded Turns: Moss Snowstick Jellyfish is soo far back on the tail that it rides in a way that is different than most boards we rode. It’s stable but takes some adjustment time to get used to being soo far back on the board. You stand on it like you would on most surfboards. It can ride with all kinds of stance angles and widths without falling apart on you but likes a narrow very directional stance best.

Edge Hold: Good grip that is borderline competent in hard snow. It’s not a specialist but can for sure keep an edge.

Turn Initiation: Very quick with short radius slalom like turns so a great board for riding in trees. The Moss Snowstick Jellyfish isn’t about tighter circle turns but they can be done.

Turning Experience/Carving: The Moss Snowstick Jellyfish steered almost all off the back foot really well and it was a unique experience for sure. We had to remember to slow down and be careful at first to get the feeling of this ride. Then when we did we didn’t pick up the speed but instead just worked on making more committed turns. It really lit up going really directional with the stance angles and close to reference or narrower with the stance width. It feels like you mounted bindings on a surfboard the way you ride so far back on a tail and many turns felt like I was hitting a lip when I surf. Many companies like, Gentemstick and Korua have boards that like more front foot weight like you are bottom turning/driving down the line on a wave and weighting hard on the front foot. With Moss they make it feel more like you are turning hard under the lip and using mostly back foot weight. Both are really cool feeling and it really comes down to what appeals to you the most. For those looking for a slow stylistic back foot weighted carve, this is pretty exceptional. If you want powerful higher speed driving carves look elsewhere.

Powder: The Moss Snowstick Jellyfish is tapered, directional, has a long mellow rocker from the middle of the board to the nose and a massive set back on board. The float is exceptional. However, if you only took this out in powder you would be really missing out.

Speed: The base has exceptional glide and keeps its speed well on flats and cat tracks. All Moss Snowstick boards have that and it’s great to see. The Moss Snowstick Jellyfish is not a bomber though. Being this far back on the tail doesn’t really inspire you to want to point it. It likes slow speed stylistic turns. That’s what it’s about.

Uneven Terrain: The Moss Snowstick Jellyfish is great for turning through bumps and has some dampness to it that absorbs hard/bumpy groomers but it bucks you around going over large bumps.

Getting Air/Park: Being so far back on the tail with the Moss Snowstick Jellyfish makes it hard to really go big with getting air. It’s not a jibber either but it’s fun surfing the pipe or hitting wave-like features in the park.

So the Moss Snowstick Jellyfish really was a lot of fun for us. We tried a massive amount of alternative freeride boards this year and this was one of the standouts. It takes about a morning of riding to get used to it but after that, each turn becomes more fun as long as you ride it the way it likes to be ridden.

We try to get as many images of the Moss Snowstick Jellyfish, but forgive us if they're not all there.