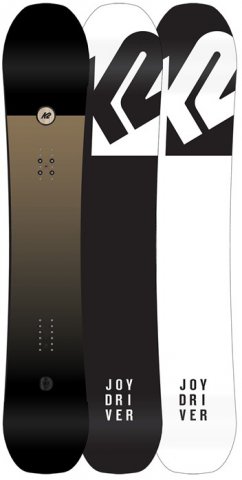 The K2 Joy Driver takes a lot of what we liked about the Broadcast shape and camber profile but adds a lot of higher-end materials/tech to it.  One thing to mention though is this vid was shot with a GoPro isntead of our normal cameras so the camber profile looks much more bowed out than it actually is.

How This Review Happened:  We had a couple of laps at a frantic manic demo day.

Sizing: Felt right to us.

Flex/Buttering: The K2 Joy Driver has an easy flex in the tip and tail that was easier to butter. In the middle of the board, it’s more medium/stiff. It’s got a damp feel but there is some pop there too.

On Snow Feel/Ability Level/Skidded Turns: So the camber profile on K2’s site doesn’t look totally like the camber profile in person. It also doesn’t look right in the video either. It looks like twice the camber with the fish eye/ GoPro. Check the  Broadcast  review to see what it’s really like. It’s a long mellow camber that runs well past the bindings but has enough transition to early rise before the nose and tail that it’s felt. We unanimously felt that it was pretty forgiving and could work with progressing intermediates without being too catchy. It tracked well one footing and flat basing. It could skid turns pretty easy in the hard/not fun conditions we rode.

Edge Hold: We could have used more edge hold and it didn’t keep up with some of the really disruptive side cuts that we rode earlier during this demo.

Turn Initiation: Pretty quick but smooth and not hookey. It tracks straight as well as it turns quickly.

Turning Experience/Carving: If we had better conditions the K2 Joy Driver could probably power us through some fun turns. In the conditions we had, it wasn’t bad though.

Powder: Probably has a similar setback on board since it shares the same exact sizing/specs as the Broadcast so it should have the same easy float in powder but just a faster base.

Speed: Pretty damp and competent at higher speeds. The base had good glide too in the conditions we rode it.

Uneven Terrain: That damp feel seems great for riding all day on a Saturday. It can power over or quickly turn around bumps equally well.

Switch: Pretty doable and it rode better than we thought for a board with a little bit of taper.

Getting Air/Park: Zobel mentioned that this tracks well into jumps and is a good board for those that lean more on the directional side of riding but still want to get air. Peter felt it pops well for an ollie and got good air off the natural features he hit.

So from what we experienced with the Joy Driver and our extended demo with the Broadcast, this is a pretty recommendable board for those that want something with more float than most all-mountain boards and less of a tapered feel than most freeride boards.

We try to get as many images of the K2 Joy Driver, but forgive us if they're not all there.