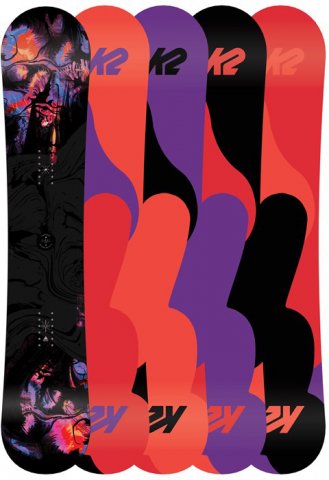 The K2 First Lite is the K2 Moment re-named. This is a forgiving entry into the intermediate level rocker snowboard. The First Lite has a good price for an entry level snowboard. Other than a few minor tweaks the K2 First lite has changed very little since our girls first rode it years ago.  So the first review in 2013 will be very applicable to the 2019 review.  As the industry continued to develop the technology here as slowly become more and more obsolete.  It’s not the ride it was in 2013 but it’s still not a bad beginner board.

On Snow Feel:  The K2 First Lite will be very similar to a flat camber board except it’s a little more catch free.  It’s kind of in between K2’s all-mountain rocker and K2’s Flatline Technology. The flat/ rocker or mostly flat shape is going to give you a stable predictable ride when flat basing on those flat beginner runs and one footing off the chair.

Powder: The set back stance combined with the little bit of rocker will help to make your first powder days pretty good.  The board will plane well and offer up a float that doesn’t want to sink very easy.

Turn Initiation and Carving:   It will also be very easy to make short radius turns.  Once you get past the basics of turning the moment will be over and you’ll want something with more character to help you get some more spring out of the turn. Most beginner riders aren’t really going to carve so this doesn’t matter.  Very easy to skid your turns.

Speed: This isn’t a bomber but it’s good for its price point.  It offers up pretty good stability at moderate speeds and the extruded base glides well enough and doesn’t require waxing.

Edge Hold: K2 doesn’t own the edge hold world but they don’t suck either.  The vast majority of their flat or flat to rocker boards have good edge hold that can handle most conditions you want to ride in. It can handle a hard patch or 2 but it’s not the best board for going out in hard to icy snow.

Flex: This is a nice playful flex that is buttery and snappy in some situations.

Switch:  With the stance centered its very easy to ride switch.

Jibbing: The Jib park by no means is off limits.  It’s not bad for checking out how to get through the easier parts of the jib park.

Pipe: This type of flat-rocker profile is not ideal for pipe riding but it’s fine if you want to ride the pipe on occasion.

Jumps:  This doesn’t really have spring out of a turn but it does have a somewhat snappy spring for an ollie.  It’s also stable for approaching a jump in the park and it’s pretty forgiving when it comes to landing too.

In the past, this was a good beginner and an ok intermediate snowboard for those that are tired of renting or don’t want the inconsistency of renting. Nowadays it’s an Ok beginner board but that’s about it.  You will grow out of it quick but its much better than renting.

We try to get as many images of the K2 First Lite, but forgive us if they're not all there.