The Jones Ultracraft went from being a more burly aggressive ride than the Hovercraft to a less damp but lighter alternative with more pop. 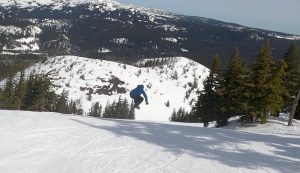 The Jones Ultracraft doesn’t have that really tapered feel and doesn’t drive super hard off the back foot. If you set your stance up a little positive in the rear foot it feels even less tapered. It has some early rise in the nose and tail that then lifts up on the sides towards the nose tail. On groomers, it feels more like a hybrid camber board instead of a lifted side board so it doesn’t wash out on you when you lean into the edge. It is forgiving for what it is but still not recommendable to intermediates due to the shallow side cut and aggressive overall nature.

The Jones Ultracraft is no buttery board but it has an easier flex to it than the regular Hovercraft. As a result it was easier to butter but it still isn’t easy. The pop is more accessible and we both found it easier to ollie for an average rider. Getting air with this is easier than you would think for how little tail there is. It doesn’t feel like you are as far back on board either.

The Ultracraft and Carbon Flagship used to be the bombers in Jones’ line but now the 2021 line has switched things up. The Hovercraft and Flagship are more damp now but the Ultracraft and Ultra Flagship still have faster bases with easier glide. That being said the bases on the standard models isn’t much far behind and Jones has some of the fastest bases in the industry for this price point. So with either choice you have top notch glide.

So if you want to power over everything at super high speed the Hovercraft is the call over the Ultracraft. It is more damp now and the roles have reversed for 2021 with the new eco friendly construction. For an ultra/lighter design this is still pretty damp. The Jones Ultracraft was a little less fatiguing in uneven terrain but both are boards you don’t want to ride all day in messy snow that requires you to slow down and turn a lot in.

The Jones Ultracraft can hold a good edge and both grip about the same in most conditions. What we did find was the Hovercraft holds the edge a little better in uneven terrain at higher speeds and doesn’t buck you out of your line as much as the Ultracraft.

Not fast edge to edge and that is a problem with both the Jones Ultracraft and Hovercraft.

The Jones Ultracraft can carve. We liked the Hovercraft a little better in snow that isn’t perfect but this has a better spring out of the turn in perfect conditions so its a wash. Both are super hard carving powerful down the line kind of rides. They don’t do a circle carve well but they sure do high speed across the groomer carves super well.

We were not lucky enough to get the Jones Ultracraft in powder but being the same shape as the Hovercraft we know what this is all about. There is a set back from center of board of -5.75” all the way back with a stance width of 22.5” and 4.5” back on reference stance at 22.8”. That big nose, chopped and tapered tail and semi-wide width make this a board that lives up to its name. The Hovercraft we rode in 2’+ of thick Sierra powder just sat on top and it could easily be a dedicated powder board. It can be a little slow in tight spots but it does turn a little faster with the spoon tech in the nose. If you like a quicker turning board in the trees this might not be the call though.

Approximate Weight: Feels light but not super light compared to the regular Hovercraft.

Flex: It’s not as stiff as the Jones Carbon Flagship but much stiffer than the Hovercraft from tip to tail.

Sizing:  The 156 felt right and any bigger might be too much for Peter, Ren, and I.  However the 160 might be much more suitable for Jimbo and Zobels 11’s.

On Snow Feel: The Ulracraft feels like it has more camber than the Carbon Flagship and many Jones Snowboards but it’s still not super catchy as you would think when you skid a turn.  It’s a very stiff, poppy and aggressive and prefers speed.

Edge Hold: Felt about the same as most Jones boards but surprisingly, the Jones Ultracraft felt a little less than the Hovercraft.

Turn Initiation: The Jones Ultracraft is like the Hovercraft and it likes to make big bold turns.  It’s not about the quick edge to edge transitioning.  It takes a bit of work to get it edge to edge.

Turning Experience: It’s a fun board to turn and it likes a little extra weight off the back foot but it drives pretty well.  For some strange reason, I felt the Hovercraft to be a little more fun to turn as it wasn’t as washy off the tail. It might just be that the wood bent up more in the curing process with the 3D Contour Base Tech and I had to be a little more careful off the back foot. I really didn’t feel the satisfaction turning with the Jones Ultracraft as I did with the Hovercraft.

Carving: The same thing happened here when committing to a hard carve and it felt a little washier.  On that same day doing an apple to apple comparison every time I was on the Ultracraft it just didn’t carve as well as the Hovercraft.  Not sure why but for some reason that happened with the same bindings, boots,  set up, sizes and conditions.

Speed: This board bombs and none of us had enough strength or ability to power this around at the speeds it’s capable of.  It also has a fast base that really glides well.

Uneven Terrain: The Jones Ultracraft isn’t fun on harder groomers that weren’t groomed well with those micro bumps and it can get pretty cranky.  It’s also not the board I want in uneven messy resort snow but it can slam into some tracked powder like it’s nothing.

Powder:  Until riding the Storm Chaser and Mind Expander I felt this was truly amazing in powder and it still is but it’s just a little shy of those too when it comes to effortless float.

Buttering: Took everything I got to get the nose off the snow and my back leg was feeling really good that day.

If you need the lightest and the best when it comes to backcountry riding the Ultracraft will work.

We try to get as many images of the Jones Ultracraft, but forgive us if they're not all there.