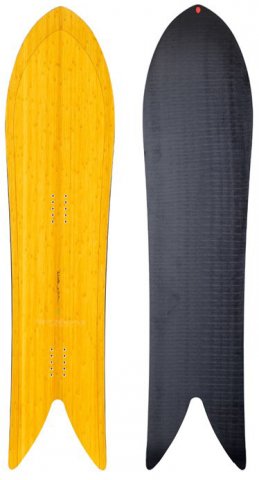 The Gentemstick Rocket Fish is a very small, light and poppy board that rides like it almost has no tail giving it a very similar feel to riding most surfboards. On Groomers, it is a tricky ride to understand, but when you get to know what it needs to make it turn it can get pretty fun. In powder, it isn’t as tricky but it is a very unique feel that does take a few runs to get used to. If you are ok with the chatter and bucky feel in uneven snow and this board matches up with your riding style then you could have a beautiful life together.

Sizing: The Gentemstick Rocket Fish is really wide in the waist and nose but not in the tail and it likes to keep it around size 10 and under. Some people can fit into it with a little bigger boot but not by much and it really comes down to the footprint of that boot. The guys with 11 ish boots felt a little big for this. Also the weight of all of us felt like it was making the board feel even smaller and lighter. I think it needs a lighter rider too.

Flex/Buttering: So the flex feels pretty medium to medium-stiff but in the tail, it feels super soft when you butter it to the point you might butter right onto your ass the first time you try. There is a lot of light poppy energy underfoot.

On Snow Feel/Ability Level/Skidded Turns: Th Gentemstick Rocket Fish is a very set back directional swallow tail kind of ride and it feels like your back foot is almost at the end of the sidecut. It feels like there is no board behind your back foot. So some will love this feeling and others might not. It likes to be steered with a lot more front foot weight than back foot weight and it’s a massive departure from almost any tapered directional board we have tried. It also needs a really positive stance angle on the front and back foot to get the board to turn without washing out.

Turn Initiation:  Super-fast. Almost too fast and you don’t need much to make it turn. The only thing faster is the Gentemstick Rocket Fish HP.

Turning Experience/Carving: So if you are a rider like we are, you really have to change up how you approach a turn with the Gentemstick Rocket Fish. It really has a feel to it like you are bottom turning on a wave and it wants you to really drive hard on your front foot. Of all the front foot tapered directional carvers the Gentemstick Rocket Fish and even more so the Gentemstick Rocket Fish HP really need that front footed weight or else the tail will wash out pretty hard and often flip around to make you end up riding switch which is something you don’t want to do with this shape. Once you get the feel of it through the turns are super-rewarding and fun. It just is a very slow, articulate careful carver that needs a very attentive turner.  The more time I had on this ride the more fun the turns get.

Powder: The Gentemstick Rocket Fish is a very little board but man it can float well. The swallowtail with all that taper really sinks down into the snowmaking you feel even more like there is nothing behind your back foot and the nose really floats. For those that like a shorter fatter surfy ride in powder might be really into this ride. It just likes really clean powder and doesn’t do as well as the other rides as it starts to get tracked up.

Speed: Not a very fast ride at all and it chatters pretty hard as you pick up speed.

Uneven Terrain: As we said above, the Gentemstick Rocket Fish isn’t ideal for those that see a lot of uneven terrain. Small light poppy boards like this really buck around in messy uneven snow and accentuate every bump.

So all in all, the Gentemstick Rocket Fish, is a very unique board that isn’t for everyone and it’s not an easy board to get to know at first. However, once you do it’s a lot of fun. Coming back to this after learning a lot more about how to ride Gentemstick boards like this correctly really changed my opinion of how it rides and I’m starting to get why this exists and who it is for.

The Gentemstick Rocket Fish is kind of like a slightly bigger brother to the Rocket Fish HP and has a very similar overall feel. If you are the kind of surfer that likes to drive a lot off the front foot and wants a unique ride then this might work.  However there is a bit of a learning curve associated with it and the Rocket Fish line were the only Gentemstick boards that I didn’t instantly feel comfortable with.

Size: 147
Days:  1
Conditions:  Really good soft groomers with some left over pow but early season conditions so not too adventurous.  Don’t want to ruin my friends board.
Riders: James
Boots: Burton SLX
Bindings:  Burton Diode
Set Up: 20″ wide 18 front -3 back set back to the tail.

On Snow Feel: Not like any board I have tried which is good and bad.  It feels really really tail light and really requires you to concentrate on keeping most of your pressure off the front foot. Also it has a very narrow stance.  It’s not something I got comfortable with entirely and in certain situations more traditional freeride muscle memory came into play that let me to take a pretty decent spill. It’s ok one footing and flat basing but it’s not the kind of board I’d personally like to be on.  Many Gentemstick rides are powder boards that excel on groomers but the Rocketfish is more for powder and an aquired taste on groomers.

Edge Hold:  Not quite like a lot of other Gentemsticks I tried and it didn’t have the grip I came to expect.

Flex: Pretty medium/stiff flex and it’s easy to butter off the tail.

Turn Initiation:  Really different to turn and you have to rely 100% off your front foot.  Lot’s of powder to freeride boards are fun when you initiate your turn off the front foot and then slowly transition your weight to the back foot to get a surfy laid back turn but with the Rocket Fish you have to keep it up front.  It’s very quick for a 29 cm waist though.

Skidded Turns: It skids turns more than you would want so you have to be very careful it doesn’t skid you around into fakie.

Carving:  Not a great carver for the reason I described above regarding Turn Initiation.  Just too light on the tail for a really surfy carve.

Powder:  This is what the Rocket Fish is really made for.  In the few thick leftover powder patches I had I couldn’t believe how easily it floated with so much of front foot in play. This little wide board can float.

Speed: I wasn’t super comfortable bombing this board. I’m much more at home with the Ray series from Gentemstick.

Uneven Terrain: It bounced and bucked me around in uneven terrain and I wasn’t into it.

Jumps: Decent pop and there is snap to this board.  I’ve seen friends get big air with this but it’s not my thing.  It feels really light on the tail when landing.

So all in all I’m more impressed right off the chair with the Gentemstick and Snowsurf Models I’ve tried like the Mantaray and Spoonfish 152.  I think I could come to understand this board better with a lot more time on it but with the other Gentemstick models being so much fun I’m not sure I’ll take the time.

We try to get as many images of the Gentemstick Rocket Fish, but forgive us if they're not all there.