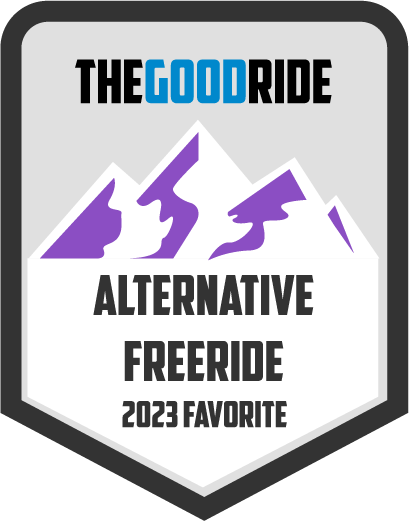 The Gentemstick Mantaray 156 is one of those every man’s boards that works just about any way you want to set up and gives you a ride that is more tapered/directional/slashy than many common freeride boards you see in the US but still isn’t super set back on the tail like some Gentemsticks. Recently Gentemstick upgraded the Mantaray 156 from Bamboo sidewalls to ABS which dampened the ride a little bit, improved the flex and especially the durability.

Ethics Statement: We don’t get paid by the manufacturer to write these reviews.  We do make money from the “Where To Buy” links, but this is our best attempt at an honest and objective review from an average riders’ perspective.
How This Review Happened:
We liked it so much we asked to keep it (we only do this with our favorites) and we were lucky enough to get one…sooooooo stoked!
Size: 156
Days:  20+ and many more coming
Conditions:  Everything from some messy spring conditions to some pretty good groomers, a few powder days ranging from 1-2 feet and some early morning slackountry time in a little powder with Drift Boards.
Riders: James (Size 9, 5’10” 185-195lbs), Grant (Size 11 6’ 160lbs), Nick (Size 10, 160lbs, 5’8”), Jimbo (Size 11, 5’11” 160lbs),
Boots: Adidas Tactical ADV, Burton Imperial,
Insoles: Sandsole Custom Insoles, Footprint Insole Technology Gameghangers Low Profile
Bindings: Union Atlas, Union Strata, Union Falcor

Approximate Weight: The Gentemstick Mantaray 156 has a medium to medium-light feel that doesn’t feel light and less like a work of art that you are unsure if you should ride it like some Gentemstick boards look like.

Flex/Buttering: The Gentemstick Mantaray 156 gives a lot of easy flex in the tip/tail but then stiffens up a good bit between the feet giving you a very easy board to butter in comparison to many in this peer group. The rocker in the tip/tail also helps. The ABS sidewalls seem to give it a slightly softer flex than the previous model we tried with Bamboo sidewalls but it seems to have almost the same energy underfoot feels lively and snappy without being too chattery.

On Snow Feel/Ability Level/Skidded Turns: Very stable easy ride underfoot that one foots and flat bases well. It has the same personality in all conditions. It has a pretty tapered feel but doesn’t feel super off the tail so it feels like it can slash or carve equally well. It’s easy to skid a turn and any advanced to expert rider that likes a tapered directional style of riding will enjoy this board. It doesn’t require a certain stance angle/width set up or riding style to have a time on it.

Edge Hold: Such competent grip for a board without any disruption in the sidecut. It knifes into harder snow really well and doesn’t grab in softer thicker snow.

Turn Initiation:  Pretty fast edge to edge and if you are in the trees or tight spots it can turn quickly. It can slalom through trees or make hard direction changes.

Turning Experience/Carving: I don’t know what’s going on here but you wouldn’t think that 1mm of camber underfoot could carve this hard and be this much fun turning. It’s a really fun back foot carver and it can also drive a little off the front foot with positive front/rear stance angles. It’s every man’s turner/carver.

Powder: Like turning and carving it does really well for not being super far back on the tail in comparison to many alternative freeride/snow surf kind of rides we have tried from Gentemstick, Moss, Korua and many others. At a 20.75” stance width when set all the way back on board the Gentemstick Mantaray 156 has 9.25” difference between nose and tail and a 4.625” setback from the center of the board. That’s a pretty healthy set back on board but not super far in comparison to many in the Alternative Freeride world. Throw in the early rise in the nose and the 20mm plus of taper in the tail you have a pretty floaty ride. We got this in a few feet of powder and it was doing just fine. If it gets super deep and not super light you might want something more floaty but overall it’s a great board for powder. The base also glides soo well in powder that it will carry you further on a traverse in or out of the powder line than most other boards out there.

Speed: We talked about the Gentemstick Mantaray 156’s base already in powder but to say it again it has exceptional glide and we haven’t come across many other bases that can keep up with it. The ABS sidewalls make it a little more damp than the Bamboo sidewalls but it also feels softer now in the tip/tail so it all evens out. It’s not a bomber and the tip/tail can get a little clown shoe effect if you really point it but that’s not what this board is about. Still, it’s competent enough.

Uneven Terrain: The Gentemstick Mantaray 156 can buck a little bit but overall, it’s a pretty good board for all-day resort riding. I love riding this through bumps or messy snow as long as I turn through it. It’s pretty good powering over it and I like the extra dampness of the ABS sidewalls compared to the Bamboo. It keeps what you are riding over from reverberating into your bones.

Switch: Doable but far from ideal. If you want to ride switch check out the independent stick.

Jumps: So the Gentemstick Mantaray might not have pure powder board kind of float but it has some tail for an easier flight. For some reason, we liked the Stingray a little better. Maybe it’s because it feels less tapered and likes a straight line a little better but it all comes down to personal preference. There is good pop for an ollie which doesn’t make much sense with 1mm of camber underfoot but for some reason, it really pops well.

Pipe: Sure. Really fun actually as long as you don’t like to ride switch in the pipe.

So all in all, the Gentemstick Mantaray 156 is one of those boards that I’m stoked to have in the quiver and it provides a really fun ride in any condition that I want to ride.

The Gentemstick Mantaray 156 is a board that isn’t on Gentemstick’s site but trust us, it really does exist. We didn’t know it was $740 at the time we reviewed it.  This is isn’t cheap but now it is for sure well within the realm of being doable. It’s a board we loved, rides just as well on groomers as it does in powder and would love to have in our quiver  It’s the kind of ride that lives outside of the traditional freeride world while still working for a wide variety of directional riders.

Approximate Weight: Felt normal and maybe a touch on the heavy side of normal but well built.

Flex/Buttering:  Very stiff for its size and it isn’t much for buttering.

Sizing: The 156 felt great for most 8-10 US boots and then as you get past 10 you are pushing it on the back foot when it comes to toe/heel drag but it might be doable with really reduced footprint boots depending on stance angles and such.

On Snow Feel: Such a stiff, stable back foot weighted, friendly beast of a turning machine. That’s the best way to describe it. It feels stable bordering on semi-locked in and those edges let you know when they are engaged and it wants more pressure for a harder turn.

Edge Hold: Very strong capable grip in hard snow.  There doesn’t seem to be any disruption going on with the sidecut but the Gentemstick Mantaray 156 holds really well as long as you have more weight on the back foot than the front.

Turn Initiation:  Very quick and springy edge to edge.  It felt quick in tight trees or tight spots and it is pretty close to being a tree cheetah.

Turning Experience: I couldn’t believe how well it turned for how little camber there is in this profile.  There was soo much energy out of the turn. I’m not saying it turns like a massive camber bow underfoot board like with Korua or something like that but I kept thinking that there was a lot more camber underfoot when turning on groomers. The sidecut’s radius is really fun for making quick fast turns and it still makes wider radius turns very well.

Carving: Same thing goes here for carving as turning.  It really lays it out hard and there is a really fun ride for those that like back foot weighted carving.  That edge just really bites in and the sidecut does such a great job of engaging you into a hard turn/carve.

Speed: Pretty fast, damp and stiff.  The base really has a good glide to it and it is very damp.  You aren’t as centered on the board as let’s say the Stingray so it doesn’t feel as bomby but it is great for how far back you are on the tail.

Uneven Terrain: Really fast edge to edge and I had a very easy time turning through bumps.  It’s not bucky but the stiffer flex doesn’t like powering over uneven snow as much but it can be done.

Powder: I’d like more set back options for more US-friendly stance width options but those who buy this often ride narrower than the US average.  If you are one of those who rides with a narrow stance you will love the 9″ back on board with a 19″ stance width all the way back. For me with a stance more on the 22″ side I still can get 7″ back on board and that is a lot of good directional float.  That combined with 22mm of taper and a massive nose that has some early rise it is a great buy.

Switch: not that good but it can be done if need be.

Jumps: There is enough tail to land big jumps and the stingray is a little better but the Gentemstick Mantaray 156 does a great job with directional air.

Pipe: For those that don’t ride the pipe switch at any point this is a great ride.  It can carve or slash walls very well.

So, as I said in the videos’ above before I knew the price point was going to drop to $740, this board is amazing but it’s hard to justify price wise at $1,100.  However, at $740 I would say do it if it fits your specs and you like tapered directional surfy rides.  It’s not the surfiest of Gentemsticks’ line by any means but it is such a fun ride that I think has the widest appeal for most riding styles.  Other than the limited stance options with the 5×2 inserts per binding the rest is pretty positive across the board.

We try to get as many images of the Gentemstick Mantaray 156, but forgive us if they're not all there.