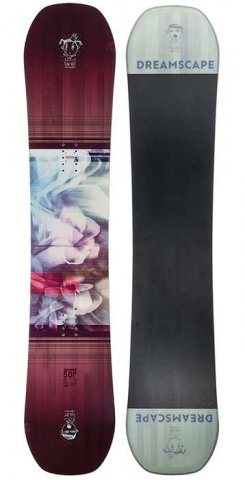 The Decathlon Womens Endzone 500 Women’s snowboard is an all mountain freestyle board that has flat camber between the feet and reverse camber, and a medium to stiff flex.

How This Review Happened: This board was sent by the company to us for an extended demo, and we sent it back after.

Approximate Weight: Felt medium heavy. But this added to how damp the board road over bumps and at speed too.

Flex: They have it listed as a 2/5 on their scale, I felt it was around a 6/10. It seemed like it would be more flexible, but was a little harder to butter than I thought it would be. But again, because of the more stiff flex, it was more damp and stable than other flat to rocker boards I’ve tried.

On Snow Feel: Pretty loose feel when flat based. Getting off the lift, this board likes to spin on you. Turning and skidding around on the snow when riding is pretty easy and fun.

Edge Hold: Medium edge hold. You get the flat camber between the feet that helps connect you to the snow. I had pretty good conditions when riding and was able to hold an edge in medium soft snow to hard snow. Not sure if I would enjoy this board in icy conditions though.

Turn Initiation: The Endzone is pretty quick to skid around from edge to edge. It is pretty loose and easy to maneuver.

Turning Experience: Was good for skidded turns and ok with carving, easy to turn in steeps and held an edge ok. It wasn’t super exciting to turn, but it was consistent and easy to turn.

Skidded Turns: These are what the board likes the most. It is easy to get from edge to edge and easy to skid.

Carving:  It isn’t really made to carve. Because of the flat camber and the medium stiff flex it was stable enough for me to carve in medium soft snow. It doesn’t have the spring out of the turns like you get with a camber board. But it does ok for a flat to rocker board.

Powder: It would be average in powder I think. You do get the help of the flat between the feet and the rocker in the nose to help create a surface area on the snow and keep the nose from sinking. So it would ride in powder ok for a twin, and you get a little room to set it back. But it won’t float as well as a full rocker board, or a more directional type board made for powder.

Speed: For being so loose on the snow and having the camber profile that it does, the Endzone is pretty stable at higher speeds. I think because of the medium stiff flex it doesn’t get the chatter that some reverse camber boards or freestyle boards might.

Uneven Terrain: It rode ok off piste and in trees. The ability to skid turns helps, but I like a little more control between my feet than the flat camber was giving me. It has enough to dabble around off piste from time to time but isn’t really made for that.

Jibbing: Felt pretty solid on boxes and rails. It was a little on the stiff side for my liking. But if you weigh more than I do it may feel just right. The flat between the feet helps you feel stable when sliding features. And the rocker on the nose and tail keep it forgiving for learning new tricks.

Pipe: Didn’t have a pipe to test it in, but I think it would ride the pipe pretty average. It may be a little difficult to hold the edge up the pipe walls.

Jumps: Felt pretty good on jumps. I think small to medium jumps are fine. You don’t get a lot of pop from the flat camber for the bigger jumps. It has a nice stable feel on landings, but I found it a bit washy if I over rotated a spin or something. So it is somewhere in the middle for learning tricks but being a bit loose.

Overall : I think the Decathlon Endzone 500 might be a good choice for someone looking for the loose forgiving feeling of the flat to rocker profile. But still wants something that can also play around all mountain and stay stable at medium to higher speeds.

We try to get as many images of the Decathlon Womens Endzone 500, but forgive us if they're not all there.