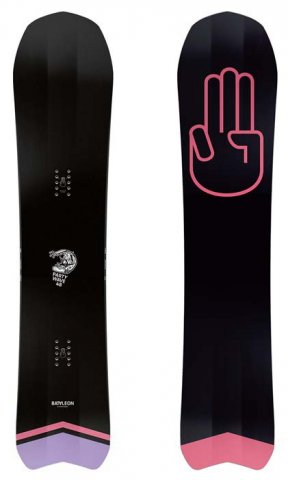 The Bataleon Party Wave is a unique board that can be fun, but it just takes some time to get to know it. Check our extended demo review on the Lobster Aaron Schwartz, which is pretty much the same ride. We didn’t have much fun on the Party Wave day one but started to have a lot of fun on the Aaron Schwartz day 3 after we started understanding TBT.

Ethics Statement: We don’t get paid by the manufacturer to write these reviews.  We do make money from the “Where To Buy” links, but this is our best attempt at an honest and objective review from an average riders’ perspective.
How This Review Happened:  We had a couple of laps at a frantic manic demo day.
Size: 153
Days: 1
Conditions: 1-1.5 feet of pretty decent PNW powder.
Riders: James (Size 9, 5’10” 185-195lbs), Peter (Size 8, 5’11” 185lbs)
Boots: Adidas Tactical ADV
Insoles: Sandsole Custom Insoles,  Footprint Insole Technology Gameghangers Low Profile
Bindings: Switchback

Sizing: The Bataleon Party Wave is a pretty short/wide board but it worked for us fine. You want to ride this shorter and wider than you normally do.

Flex/Buttering: The Bataleon Party wave has a very easy flex to it that butters well. It also pops just as well in the tip/tail as it butters. It has that SWS rubbery feel but it isn’t lacking for pop.

On Snow Feel/Ability Level/Skidded Turns: The Bataleon Party Wave isn’t an easy board to get to know. Usually, at a demo you can get a good idea of what a board is going to be like. Bataleon’s TBT is soo different from it’s not one of those boards. Getting an extended demo on the Party Wave’s brother it started to track well on day 2-3. However, on day one it’s not fun and feels like you are on an edgeless disc. It didn’t track well and neither of us liked one footing on it. Later we learned that putting pressure between the feet towards the middle of the board made it track better.

Turn Initiation: The Bataleon Party Wave was hard to turn for us because TBT takes some time to get used to. When we got to know how the Aaron Schwartz turned but it became smooth and predictable.

Turning Experience/Carving: The Bataleon Party Wave was a washy mess on the groomers back to the chair.  I started having fun carving on the Aaron Schwartz on about day 3. So it just takes some time to get to know.

Powder:  The float was easy and the nose on the Bataleon Party Wave was like the front of a boat. The bad was also that it felt like a boat that didn’t have a rutter. I would not suggest going out on day one to learn to ride the Bataleon Party Wave in powder as we did. It’s going to be much better day 4 or 5 once you understand how to turn it.

Speed: Not a fast board but there is enough dampness for some short bursts on the mountain.

Uneven Terrain: So the Bataleon Party Wave bucked and bounced us around. That’s because we were often involuntarily sliding sideways into bumps we would normally turn around.  Once we learned how to ride its brother we found it to be pretty good in uneven terrain as long as you slowed it down a bit.

Switch: Doable but not ideal.

So we were lucky to get an extended demo with other Bataleon boards because all our past experiences were just one day or less than a day. Now after riding Bataleon and Lobster boards for 5+ days in a row we finally get it and it’s a fun ride. It’s just hard to recommend to someone that doesn’t ride a lot each season. If you can take the time to get to know this camber profile it could become a good friend though.

We try to get as many images of the Bataleon Party Wave, but forgive us if they're not all there.