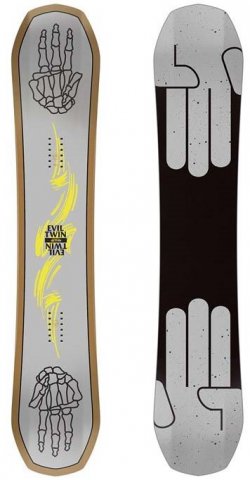 The Bataleon Evil Twin doesn’t ride like most hybrid shapes and it took us many days to get to know it. When we did we had an ultra-forgiving, poppy, super easy buttering ride.

Sizing: The 157 fit perfect for my specs. Jimbo’s size 11’s were a little too big. He needed a wide.

Flex/Buttering: The Bataleon Evil Twin has this rubbery buttery flex that just loves to play around. It wasn’t lacking any pop either though and it was really easy to ollie.

On Snow Feel/Ability Level/Skidded Turns: The Bataleon Evil Twin isn’t like other boards we have ridden. The bent up effective edge doesn’t track like most hybrid shapes out there. At first, it feels so catch-free that it’s like you are on an edgeless mess. I couldn’t do more than just skid and spin around the mountain. After day 2, I started to learn how to put more pressure towards the middle of the board and it started to track a little better on a turn. By day 3, I was starting to get the hang of it and that’s when the fun began. It takes some time in all conditions to learn what it is going to do.

Edge Hold: As long as you put some pressure between the feet down into that edge it holds well enough. It’s not what we want when conditions are really hard but it was better than we thought it would be. It’s best as a good condition ride.

Turn Initiation: The Bataleon Evil Twin was not easy for us to turn at first and it felt pretty washy.  After a few days, I found that squeezing your legs together and driving that pressure down to the center of the board made it turn better. It was the opposite of how we ride a lot of hybrid rocker boards. Once I got that down then it started to become fun to turn.

Turning Experience/Carving: I couldn’t get a really satisfying carve going.

Powder:  No powder but just the way it powered through slush on some days we could see that this can be an easy floater for a twin.

Speed: The Bataleon Evil Twin was not a real strong mountain bomber. There was some chatter as it picked up speed but it’s not a mess out of the park.

Uneven Terrain: The Bataleon Evil Twin is a great all-day resort rider. This rubbery feel underfoot didn’t pass up the chatter into your joints. We felt this shield us over bumps of all kinds at slow to moderate speeds. It’s best for turning around bumps but just not powering over them at higher speeds.

Getting Air/Park: The Bataleon Evil Twin seems really at home in the park. It had me buttering on soft spring pipe walls. That’s just not something I normally wouldn’t even consider but it was just so forgiving. It doesn’t seem ideal for those that hit big kickers but it shines for most of us small to medium guys. We didn’t have any time in the Jib park but this is the kind of board I’d like to go jibbing with. It just feels forgiving for people of all ability levels.

So the Bataleon Evil Twin has a learning curve could be a deal-breaker. However, if you are willing to put in the time it could be a deal maker.  Especially if you want a very forgiving buttery, poppy ride.

We try to get as many images of the Bataleon Evil Twin, but forgive us if they're not all there.