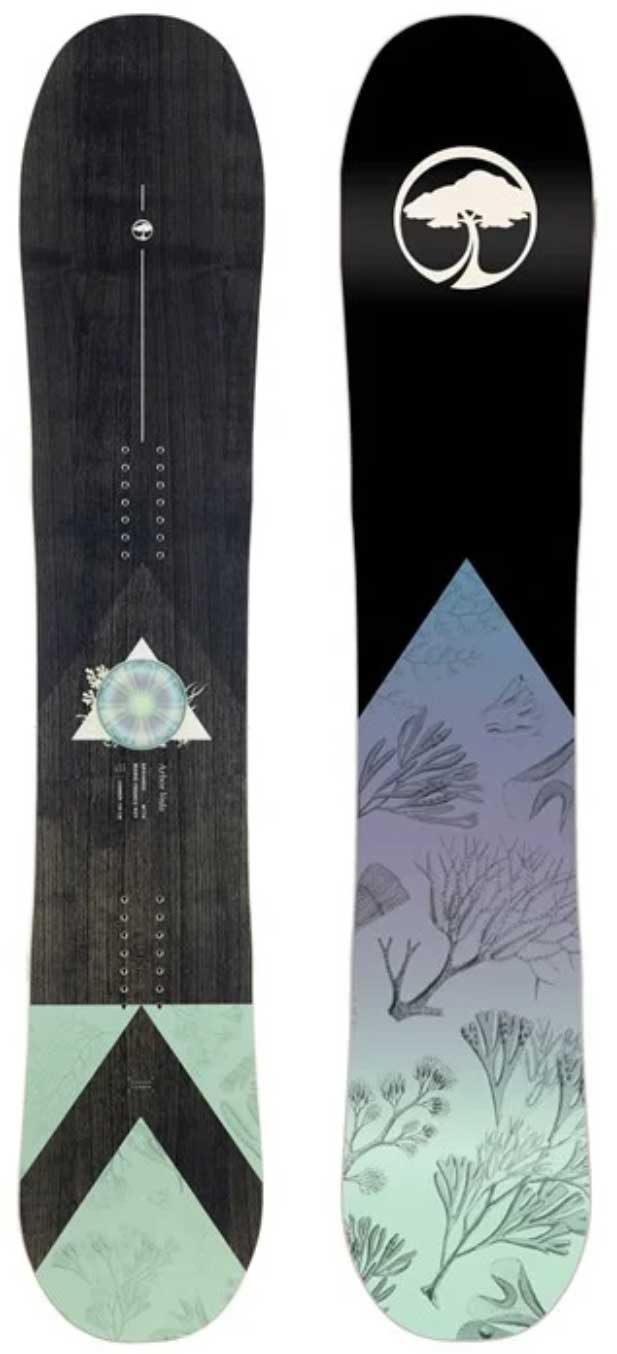 The Arbor Veda is the new board from Arbor for us ladies this season. It is directional and tapered with a positive camber profile. It has a freeride personality while still being slightly playful and fun inspiring.

Conditions: Spring conditions with some powder on top. All off piste since resorts were closed.

Would be nice to see more options in the smaller size range.

On Snow Feel: Right away the Veda felt pretty good under foot. I think I had the perfect conditions to test this board out. It has a camber profile that keeps it feeling connected with the snow. It also has raised fenders on the nose and the tail to keep it feeling a little loose and playful.

Powder: The Veda has all the right ingredients to make this board ride well in powder. It is pretty directional, has taper, and also comes with Arbor’s powder fenders. The raised fender in the front is longer than the raised fender in the back encouraging the board to float even more. I thought it felt great in soft snow. And it was a lot of fun, and pretty easy to stay on top too.

Turn Initiation and Carving: Although I didn’t get to try this on a resort with groomers, I had a lot of fun turning this board. It seemed to have a nice balance between feeling solid enough to charge and also feeling playful enough to explore natural features and mess around. It felt medium fast to get from edge to edge, and I imagine it would be pretty fun to carve. I’ll do more hands on research next season with carving.

Speed: It was easy to get the Veda up to speed. And it felt stable with the speed I took it to.

Uneven Terrain: The Veda felt right at home in the trees that I was testing in. I could turn it pretty quickly through tight spots and it could charge over chunder as well without feeling bucky.

Edge Hold: The positive camber profile mixed with the bumps at your toe and heel contact points make the Veda good for riding in hard snow and even some icy conditions. It is somewhere in-between the abilities of a board with full magna traction and a board with no added disruption in the sidecut.

Flex: It has a 5/10 flex so it is not too soft and not too stiff. It is soft enough to turn quickly and not feel too aggressive, but stiff enough to pick up some speed and feel solid.

Switch: Riding switch feels like your are riding backwards on this board. It isn’t terrible and you can do it, but it is pretty directional and also tapered which keeps it feeling weird when you ride switch.

Rails/Jibs: Wouldn’t be an ideal jib board, but could dabble on mellow features.

Pipe: I think this board would be fun to ride in the pipe. It could hold ad edge up the wall, and has enough energy in it for nice pop, all while feeling pretty stable and catch free.

Jumps: Would be stable on jumps, but it has the personality for more natural features and hits.

Overall: If you like a board with a freeride personality but still want something that feels a little playful the Arbor Veda might be a good choice. It had a nice mix of stability and playfulness that really appealed to my riding style. The Veda likes to be off piste and exploring all types of terrain, but would make a good board for powder days as well.

We try to get as many images of the Arbor Veda, but forgive us if they're not all there.