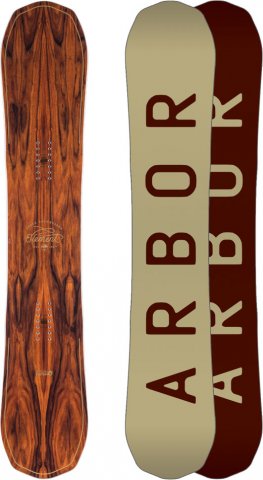 The Arbor Element has a centered stance and a very freestyle approach to mountain riding. Despite the lack of spring out of the turn and the washy unstable nature of the rocker profile, we all had a pretty good time on it. I think what made us like it more than dislike it is the strong edge hold, butter-ability, and pop.

Ethics Statement: We don’t get paid by the manufacturer to write these reviews.  No one is perfect and we do make money from the “Where To Buy” links below, but this is our best attempt at an honest and objective review from an average riders’ perspective.
How This Review Happened:
We borrowed this for an extended demo and then returned it.

The 2014 Arbor Element changed up it’s tip/tail to make it look more sexy but it also changes up the ride a little bit.  The effective edge is now 2cm shorter which means there is a little more nose going on for dealing with powder.

Arbor changed the manufacturer this year so the 2014 production models are not coming from Elan but instead they are coming from SWS.We didn’t try the Production model and neither did most review sites.  We tried a demo model from Elan.  SWS is pretty much the same people who made the boards at Elan starting a new factory so my guess is the boards should be pretty much the same as they were before with the exception of the sexy tip/tail.


So the Arbor Element is marketed as a mountain twin. We would call this all mountain freestyle which is pretty much the same thing. Arbor does 3 things. This is a pretty good board for those that want to take a freestyle focus to the mountain and don’t carve out your turns much.

On Snow Feel:   Same feel as the old Element RX. I thought it would feel different with less of an effective edge but the ride feels pretty much the same.

Powder:  I had no powder but the addition of more nose/tail adds will definitely add to the float in powder. It’s almost the same kind of change with the Coda and it helps compensate for the inability to set back the board like most all mountain rides allow you to do.

Turn Initiation and Carving:  Nothing special when it comes to a carve here.  Continuous rocker just doesn’t allow you to get the kind of spring out of a really hard turn as a board with some camber in the profile or the old camber model.  It’s really good for rocker but it washes out when you lean into a carving turn. This is what makes me lament for something more in the profile to complete this board.  This is quick and fun for a short radius turns and medium to wide radius turns are pretty good.

Speed:  This is pretty fast for continuous rocker but if you compare it to the old camber model or a hybrid shape it’s not going to compete. Still you can pick up some good speed and there is pretty decent stability…again for continuous rocker.  It feels like a little bit stiffer Coda and makes middle ground groomer speed more smooth and damp.  My crew and I actually preferred the Element here compared to the Coda but the extra pop the Coda has makes us fine tolerating the extra chatter.

Uneven Terrain: Almost as good as the Arbor Coda here and it really deals with crowded bumpy snow very well. It’s great for busy resort days and I’ve never had a problem on this in any bumpy terrain. Expecially if I pair it up with some good shock absorbent bindings like the Cartels or Cartel Limited. Its easy to manuver and handles slower speed shock really well. It’s like an off road car with massive shocks and a lift going over a dry creek bed. Good times.

Edge Hold:  This edge hold grips when you need it and doesn’t grab when you don’t.  Grip Tech is one of the better additions to the side cut.

Flex: Very solid medium flex going on here. The rocker makes it still easy to butter and play around and it’s pretty playful.  Not as playful as the Coda but still really good.

Switch:  I think the tail is stiffer than the nose but I’m not sure.  Other than that it’s a twin and rides equally well in either direction. It might be a little different when it comes to buttering but I had a hard time telling the difference.

Jibbing:  The medium flex and larger size isn’t ideal for a jib board but it’s ok if you want to play around on occasion.

Pipe:  Pretty fun Pipe board. It’s not ideal for the technical expert pipe rider but most people will find it very easy and forgiving to play in the pipe.  It’s not a bad board for someone who wants to get better there or someone who doesn’t want to push it too hard.

Jumps:  There is nice pop from between the feet.  It doesn’t have the bounce that the Coda does but you get a little more stability at speed with the Arbor Element so it’s a nice compromise between stability at speed as well as keeping a lot of pop when it comes to an ollie. Hitting kickers of most size should not be a problem.  On the medium size kickers I hit there was no issue here. Pretty stable on approach and forgiving when it lands.  If you don’t land right you don’t have any camber to help you compensate and possible pull it off but at the same time it’s not very catchy either.

If you want a little more stability in your all mountain freestyle approach than the Coda then this could work well for you. If you are looking for a true all mountain board then this might not satisfy all your needs when it comes to medium to carving turns.

Arbor Element 2013 and Below Review

This is about the most fun you can have on a continuous rocker board when it comes to All Mountain Freestyle riding. It’s a great continuous rocker directional twin for taking a freestyle approach to powder riding or hitting the mountain with a more aggressive switch/regular approach.  It’s like a stiffened up version of the Coda and we like this. Our only weakness we found with this board was when it came to carving.

On Snow Feel:  The Arbor Element RX has a good feel between the board and has some special thing going on to keep it from feeling like many loose continuous rocker boards out there.   It’s still missing something that other flat, camber or hybrid shapes have but it’s right there with many hybrid rocker shapes stability wise.  It’s about as good as you can get for it’s design. Flat basing and one footing is doable and you can definitely get use to it.  I’d rather be on a more stable board if you have to one foot for a long ways but when strapped in you can have a lot of fun treating the mountain like a park with this loose catch free ride.

Powder: If you like riding with a set back stance then you might not like this centered stance directional twin as much as other rocker shaped boards with one. This is ideal for that rider who likes to ride switch in pow as much as they ride regular. It’s very easy to maneuver in tight chutes or through trees. The Arbor Element RX has a much different ride than the CX. The CX takes more work on the back leg to keep the nose up but it has a set back and gives a more old school ride to it. The RX has a more effortless float but the centered stance holds it back from being a better directional powder ride.  I’d say most people who like a centered stance in powder will say this is excellent but those that like a set back stance would say it’s good.  This is a good powder board with a centered stance for those that deal with deep thick snow.  If you ride in lighter powder like Colorado or Utah it will own it.

Turn Initiation and Carving: It’s easy to control tight or wide turns in almost any type of terrain. It’s very forgiving without being too easy. Nothing great here but it can hold an ok carve if you are careful to keep it between the feet but it can get a little washy if you lean into it too much. The CX owns the carving category and is soo different from the RX.

Speed: It can get a little unstable when you get to really high speeds but moderate speeds are pretty managable. It’s a nice step up in mountain stability than the Coda here.  Flat basing is not ideal but it’s acceptable.

Uneven Terrain: The Arbor Element RX not as effortless and bouncy through rough terrain as the Coda but you get a little more speed in return for almost as good as a feel underfoot heading over bumpy terrain and dealing with end of the day conditions.

Approximate Weight– It’s well built and very beautiful but they did what they could to make it light enough not to bother most people on the chair.

Edge Hold: Edge hold is very consistent while not being overly grippy.  Love the extensions at each binding that they call grip-tech.

Switch: Almost excellent.  Only the really good switch rider would notice the difference in flex.

Rails– The flex is too stiff to be a good ride but it’s not bad.

Pipe: Great board in the pipe.  It’s got enough edge hold to climb and stay your course between walls and the continuous rocker is very forgiving if you aren’t perfect in there like most.

Jumps: This is almost as fun as the Coda when it comes to generating your own air on an Ollie. Perfect park jumps are very easy with the RX and we feel this is one of the better qualities of the Arbor Element RX.  While it doesn’t have the pop of the Coda it has more stability at speed and can handle bigger jumps so it’s excellent in a  different way than the Coda.

Overall the Arbor Element RX with it’s bigger sizing is a fun directional twin for all mountain freestyle riding.  It’s a great board for those that want more float in powder regular or switch.

We try to get as many images of the Arbor Element, but forgive us if they're not all there.

I agree with the other review here on the lack of edge hold on anything mildly icy. It's a fun little board in powder conditions but unless the mountain is all powder, it can really slip out under you.

Maybe just not my type of board. Did ride boards like the Ride Timeless, Burton Custom, K2 Eldorado and Lib Tech Travis Rice Pro HP.

Did use the Arbor Element for 1 season and never get used to it. Board performs really poor on the icy slopes in the morning. No edge hold at all.

When conditions are good boards turns really fast, just I couldn't control it at high speed.

Off piste the board performs weak. Board is to flexy to control at speed in difficult situations.

product 0.3
3.0 4.0 2 2 I agree with the other review here on the lack of edge hold on anything mildly icy. It's a fun little board in powder conditions but unless the mountain is all powder, it can reall Arbor Element 2010-2017 Snowboard Review