Turn Ons/Swipe Right: Rides really centered on reference stance. Feels amost like full camber but still a really catch free, forgiving ride. Very damp.
Turn Offs/Swipe Left: Can feel edgeless in harder snow. Not an ideal floater for this much set back on board.

The Arbor Bryan Iguchi Pro Camber is a pretty damp fast aggressive all mountain with a mostly camber feel that is still very forgiving. It has a little taper but when on reference stance/centered on sidecut it feels much more like an Arbor style directional twin than you would think.

Ethics Statement: This is our unfiltered opinion without any manufacturer oversite. We do make money from the “Where To Buy” links, but this is our best attempt at an honest and objective review from an average riders’ perspective. 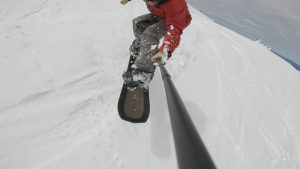 Here are some ideal US boot sizes for these boards. You can of course go bigger or smaller but these again are just the ideal sizes.
156: 8-9

The 156 felt great for Peters and my specs listed above and it could handle our weight no problem.

The Arbor Bryan Iguchi Pro Camber is just barely tapered (1-2 mm depending on the size) and really feels much more like a non-tapered board when on reference stance. Even when set back, it doesn’t feel that directional or tapered which makes sense being centered on sidecut and having a tail close in size to the nose. It has a very between the feet kind of ride.

The System Camber profile has camber from tip-tail but with lifted contact points.  On the table it looks like none of the edge touches the snow but on snow it feels pretty stable in most conditions. It tracks well in good snow but on firm to hard snow it can feel a bit edgeless. It takes a little getting used to because if you make a turn like you would in soft snow sometimes you will wash out before you get to the edge. However, if you keep the pressure between the feet it works better. It doesn’t have a long learning curve though but it is super forgiving. Very easy to skid turns when you get off your game.

This isn’t a mellow flex and the Arbor Bryan Iguchi Pro Camber has more of a stiffer freeride flex packed into more of an all mountain shape. It feels medium/stiff throughout and doesn’t have any places on the board where it flexes easier.  It takes some work to butter or Ollie but a strong rider might really like this.

The Arbor Bryan Iguchi Pro Camber can point it really well for an all mountain board and it has a pretty damp feel to it. It is not in the same realm as the Annex or A-Frame or Crosscut but it’s pretty close. The base has pretty good glide but we have felt a little more glide from some other boards at this price point.

This damp feel can power over uneven micro bumpy to chundery snow and it was really impressive for a 156. The Arbor Bryan Iguchi Pro Camber can also ride all day on a crowded resort and not fatigue you as much as you would think for the flex.

The Grip Tech in the Arbor Bryan Iguchi Pro Camber is grips really well in hard snow. That being said, you need to get that edge over and learn how to engage it without putting too much pressure on the lifted sides near the tip/tail. It doesn’t grab too hard in softer snow either.

Kind of in between med and med/fast edge to edge. In tight spots it turned fast enough to not feel uncomfortable but it wasn’t effortless either.

the Arbor Bryan Iguchi Pro Camber doesn’t really like to carve a tight circle but it sure can carve a moderate to wide width groomer like a champ. The more pressure between the feet you put in the more it seems to engage the camber and the Grip Tech edge extensions. Like we mentioned before it doesn’t like too much pressure near the lifted points of the effective edge called Uprise Fenders. It can wash out.

The Uprise Fenders seem to help a little in powder but it still feels like its just a bit better than full camber. It isn’t up there with many hybrid shapes in a similar size and setback. That being said if you know how to ride camber in powder you will like the the Arbor Bryan Iguchi Pro Camber. There is a touch of taper, a longer nose and a setback on board of 2” at a 21.75” stance width. It doesn’t feel that set back and does better for those that see a lot of steep powder runs. It does not shine for low angle powder riding. Riding on reference stance was taxing on the back for us in low angle wet spring snow.

The the Arbor Bryan Iguchi Pro Camber can ride switch really well and it has a very centered feel when on reference stance. I guess that is probably because it is centered on sidecut. So very good for a slightly tapered board. Felt more like a twinish ride and even rode almost as well s some directional twins we have tried. Very doable and fun.

Unfortunately, we didn’t get a chance to ride this in a park because it was shut down due to Covid-19. We were just lucky to get on this.

So, all in all, the the Arbor Bryan Iguchi Pro Camber has a ride that will appeal to those that want a stiff semi-powerful all mountainish ride that is also really forgiving.

The Arbor Bryan Iguchi Pro Camber is a pretty fun board that we all liked over the Rocker version. If it had a little more directional float in powder then it would be a board we’d want to own and something we could easily recommend. It’s a fun ride and could find a great role in someone’s quiver.

Ethics Statement: We don’t get paid by the manufacturer to write these reviews.  No one is perfect and we do make money from the “Where To Buy” links below, but this is our best attempt at an honest and objective review from an average riders’ perspective.
How This Review Happened:  We borrowed this for an extended demo and then returned it and also got a few laps on it at the demos.

Flex: Our board was a demo model and the flex was really mediumish.  Not what we expected for how this board was described.  Looks like it was stiffened up though in production from the demo we had so it seems like it’s now more med/stiff.

Sizing: The 156 fit our specs pretty well and especially so our boot size for those with 8.5-9 boots but I think the 159 would have been the better call.  However, Zobel and Jimbo with their 11’s would not be happy with this model sizing at all and they would need something more in a mid/wide.

On Snow Feel: So it feels almost like camber until you get to the tip/tail.  It’s got this fender tech that lifts a little portion of the end of the effective edge like a fender does on a car….so yeah it is what it’s described to be.  It’s very good for making camber not feel catchy and it doesn’t have that TBT washiness on semi-committed to carvy turns.  It’s got a stable non-catchy camber like feel and it’s the kind of board you want to take out on groomer days.  It’s a slightly tapered somewhat directional board with a centered stance. So it feels a little mountain freestyle, a little surfy/freeride but not really committed to either side.  It’s like a lot of all mountain boards are that we ride.  For it’s shape it might be a touch more surfy/freeride than some of it’s peers but it’s still more of a chameleon type of board that likes to accommodate different moods and riding styles.

Edge Hold: System tech grip is great and it’s a really fun board.

Turn Initiation:  Pretty quick edge to edge and the Bryan Iguchi Pro Camber goes where it should quickly.  There doesn’t seem to be any lag time and that’s great for riding in tight spots.

Turning Experience: I really thought the fender tech would fuck this boards ability to turn up but it was really fun and it allowed us to push it without as much consequence as traditional camber.

Carving:  You could lay this out really well and it felt like a fun carver.  It’s like riding a camber board with a little early rise in the tip/tail so you only feel a little camber taken out of the turning equation so it’s really fun for laying it out and trying new carves without worrying about the end of the effective edge catching as much as traditional camber.

Skidded Turns: It’s not super easy like the continuous rocker Bryan Iguchi board, which is super easy, but this is pretty easy for camber for sure.

Speed: Even though our demo flex was mediumish it still held well when picking it up a bit.  I bet the stiffer production model would be even better for really opening it up.

Uneven Terrain: We had no problem weaving in and out of bumps and it has a touch of a rubbery feel that will absorb the shock so your body doesn’t.  You could ride this all day on a crowded Sat.

Powder: So the fender tech makes this board catch free but not floaty.  It’s good for a camber board with a centered stance but it’s not as good as many of the similar hybrid shapes out there. You would need the rocker version if you want a lot of float but then I don’t like the drive in steep terrain that the continuous rocker solution has. If you have another board for real powder days this could work. I wish they could tweak the fender tech to also give this board a little more float to compete with many of it’s peers but as it stands it’s not bad for a camber ride.

Buttering: Ours was very doable when it comes to buttering but not sure about the production model.

Switch: For a board with a little taper this rode pretty well.  It feels different but not so different that you couldn’t easily get used to it with just a little bit of time.

Jumps: The fender tech is good in some ways and questionable in others. I noticed that the first day when I tried to Ollie I loaded the edge near the tail and that’s where the fender tech is so I washed out instead of popped. You get this feeling like you have an edge from tip to tail throughout most of the board but then not on the edge.  I got used to it but it’s a little weird.  It’s good though when you are off your game and need to spin out.  It’s less likely than camber to send you slamming into the ground so that’s good too.

Pipe: This was really fun in the pipe and it made a not so great pipe rider feel more confident.  I like how the tech

So, all in all,  we unanimously liked this board over the rocker version, it does a lot of things well, it’s a fun board to go out and turn. It’s not a perfect one board quiver but I think it can make a lot of people happy as long as they know the boards limitations.

We try to get as many images of the Arbor Bryan Iguchi Pro Camber, but forgive us if they're not all there.