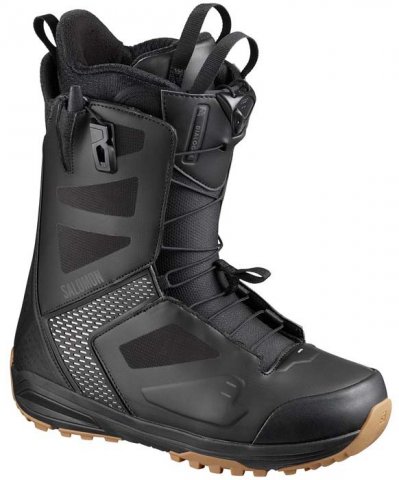 The Salomon Dialogue is a mid flexing boot that offers a good fit and good response. We also got to try this in a Wide and it was a gamechanger for us comfort-wise. We didn’t try the 2019 model but heard it got an overhaul from last year.

Size Tried: 8.5 wide for Peter and 9 wide for me. I had a size 9 regular but it didn’t fit my foot as well as the wide.
James’ Foot: Size 9 US and D bordering on E width.

Sizing/Fit/Heel Hold: The size 9 regular felt a bit tight like most Salomon boots have done over the years but the wide boot fit me really well. Based on our foot width it never occurred to us to try the wides but when Salomon sent us wides too we had to give it a go and were super stoked on it.  It wasn’t as wide as my regular Adidas Tactical ADV but it’s not narrow by any means. Overall, the Salomon Dialogue Wide had a great fit for my foot. I think Peter, even with a narrower foot preferred the wide too. The back is narrow compared to many boots with this width and it holds the heel in well in a size wide and especially so in regular. There isn’t any additional hold tech but they made sure the built-in J-Bars and heel area wrap around that part of your ankle very well when laced up.

Lacing/Adjustability: The Lacing system is somewhat simple and a little bit messy but I’ve seen a lot worse with this type of quasi speed lace. Overall very doable for a hybrid between speed lace and traditional lace because the upper and lower lacing is separated. So if you like upper/lower adjustability then this could work.

Comfort: Both Peter and I felt comfortable day one and day two and day three etc. The boot wraps around most feet really well and we had zero pressure points. Not to say you will as well as all feet are different but it’s worth a shot.

Flex & Flex Retention: The Salomon Dialogue isn’t a super boot for flex retention but it is pretty well constructed and there was some thought put into retaining this medium bordering on medium-stiff flex.

Footprint: The footprint has come down a lot over the years and it held up well against my 8.5 Adidas boot that fits just the same lengthwise inside as the 9 Dialogue.  It used to be a good inch or more in a comparison like this so there is much less chance of toe/heel drag with Salomon now. I hope this is the same for the rest of the line as well. 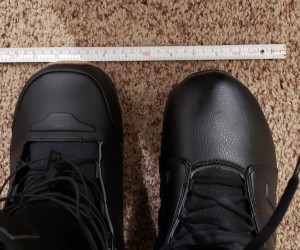 Shock Absorption: Nothing bad and nothing great. Pretty medium. It provides decent shock absorption without limiting too much board feel for those that like more of a skate like feel.

Traction: Very good traction and the almost all rubber sole is a great thing to have in icy parking lots or lift lines or anywhere you need traction which in our opinion is all the time. So glad there is no EVA foam in contact with the snow.

On & Off Ease: Pretty middle ground on and off. Noting fast but nothing annoyingly slow either.

So all in all, it’s been a while since we got on Salomon boots but after this experience, we want to get on more of their wides as it was the first time a Salomon boot felt really comfortable for us.

We try to get as many images of the Salomon Dialogue, but forgive us if they're not all there.